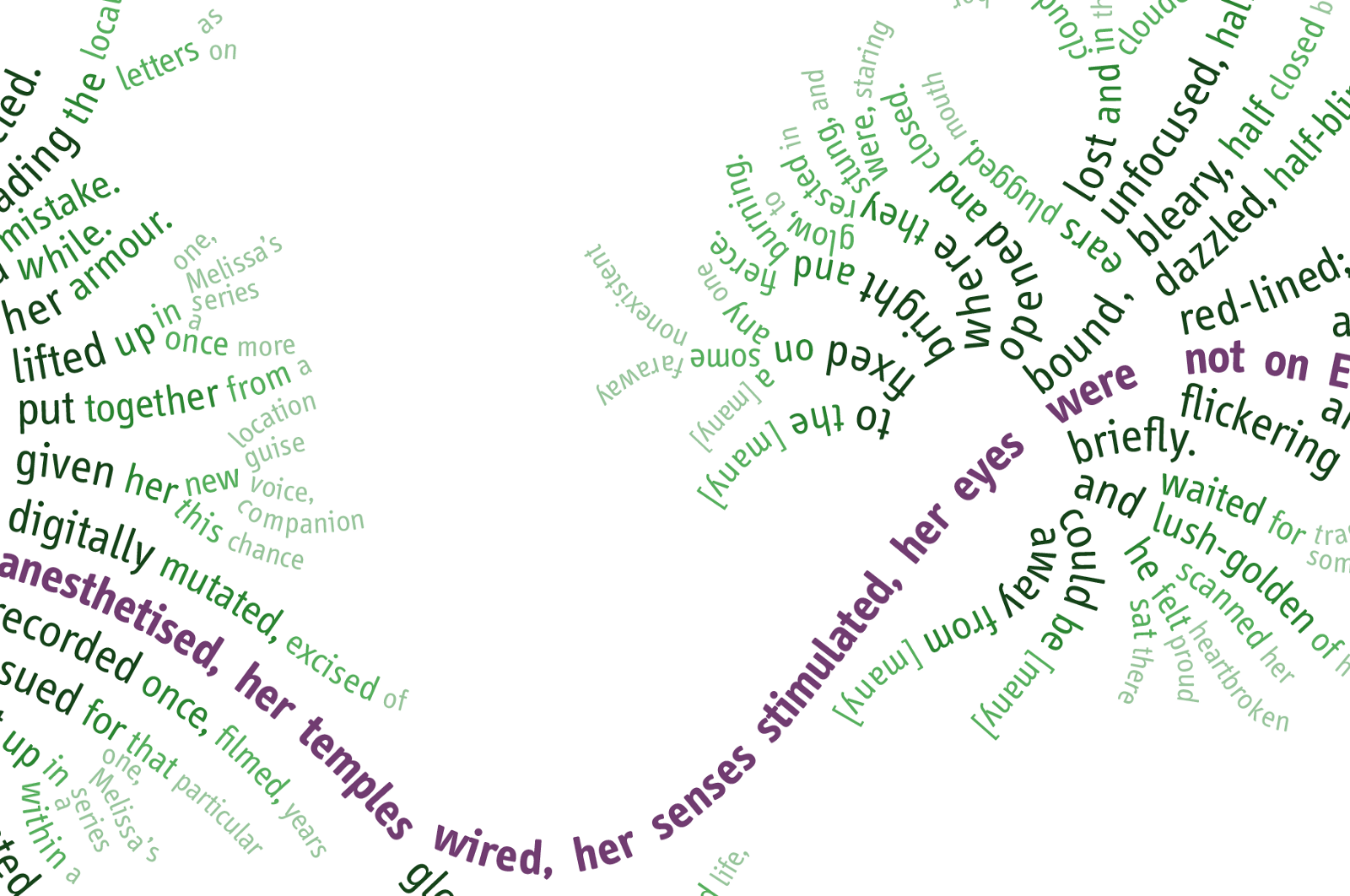 I wanted to throw down some notes about the work/play I’ve been doing around remixing Jeff Noon’s books. Also I promised to explain what the above image was all about.

It all starts way back when I first fell in love with Mark V Shaney, who I discovered via an article written by Penn Jillette: “ I Spent an Interesting Evening Recently with a Grain of Salt”. Mark is, or was I guess, a bot that posted rambling messages to the net.singles UseNet group.

He did this by consuming all of the messages posted to net.singles, and using a Markov chain to spit weird messages back out again.

I’ve toyed with Markov chains before but always had trouble explaining my use of them to other people, so I drew a diagram part of which is at the start of this post.

One way I explain is by saying I’ve thrown loads of fairy tales into a system, then say “ Once upon a ” and ask you to predict what the next word will be. You’ll probably say “ time ”. You’re guessing the next word based on the previous ones and your experience with fairy tales. We then move onto “ upon a time ”, next word is probably “ there ” at which point the sentence may continue with either “ was ” or “ were ”, as in “ Once upon a time there was a… ” or “ Once upon a time there were… ”, at this point we’ve got a split and there’s nothing more ahead except forks and probability.

Google auto-completing search queries as you type is similar.

Anyway, I’ve done a similar thing using the work of Jeff Noon (for reasons I’ll get into in a moment) as the source material, you can see it here: Remixing: Noon.

I’ll take the following output as an example…

This started with the words “ The whole” from the book Channel SK1N, if we search for those two words we can see that they appear in four different places… 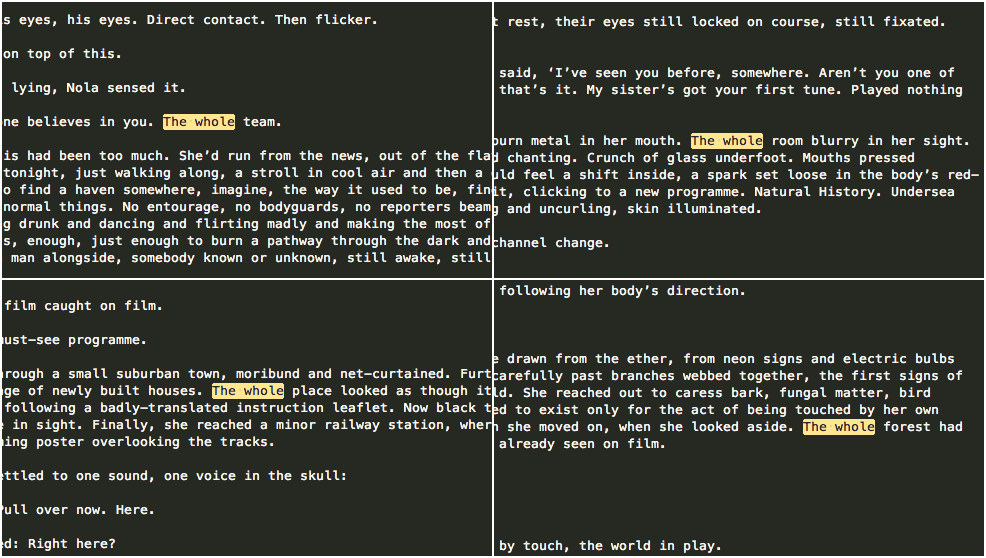 The original sentence from Channel SK1N starting with “ The whole forest… ” continues “ …had the feel of a stage set, a location, of something she had already seen on film. ” quite different to our “ The whole forest had been anesthetised, her temples wired, her senses stimulated… ”.

The end result is Jeff Noonian but not Jeff Noon, it’s using all the same words that Noon uses and no more, just not in the same order. The chances of it recreating the whole original sentence are slim, 25% to pick “had”, then 50–50 of to get “the”, only 20% for the “feel” and onwards. Just a 2.5% chance to have matched the first 6 words.

Here’s the resulting image for our phrase… 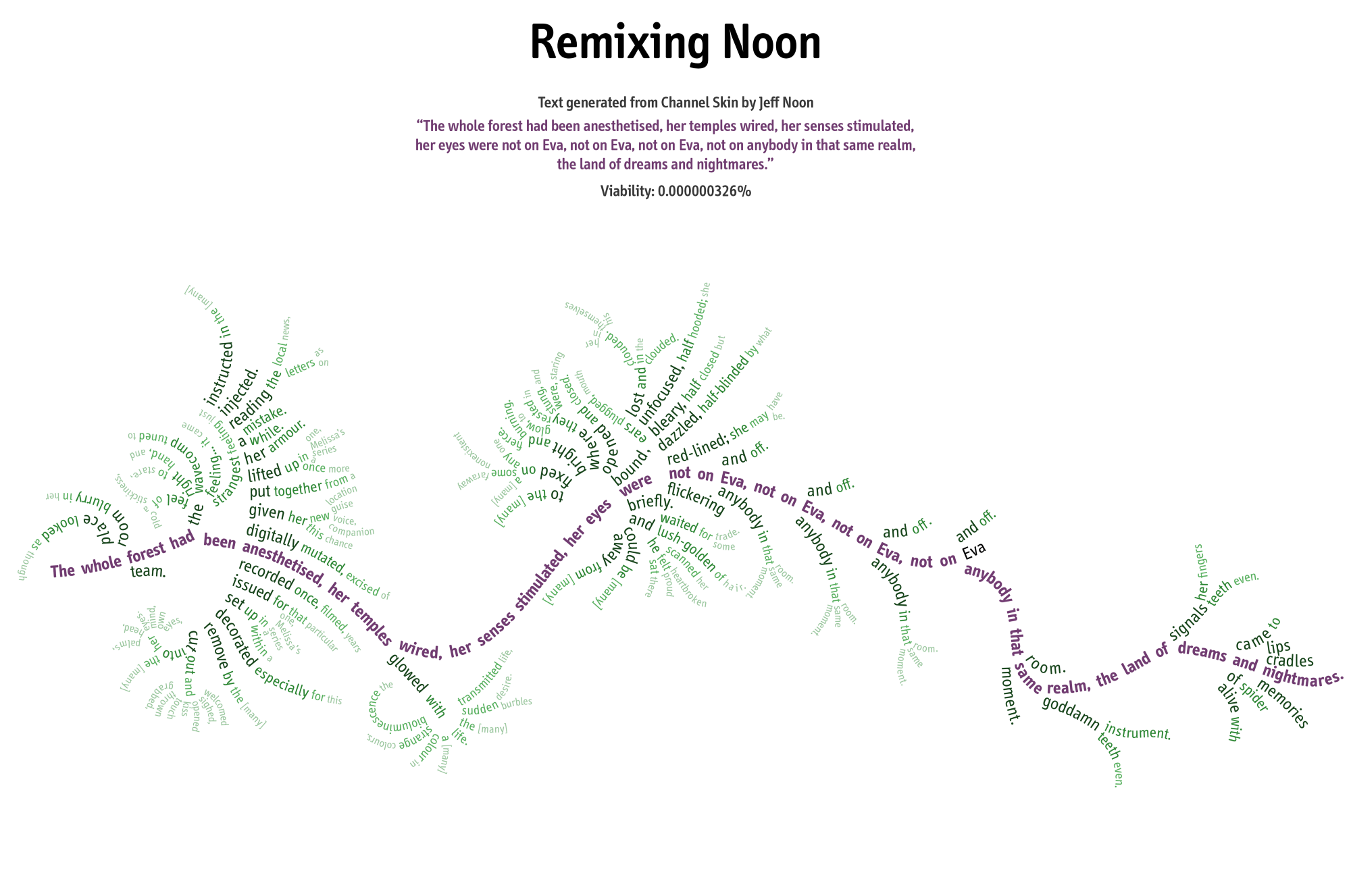 A couple of reasons, and not very well articulated ones at that. The first is easy, Noon’s books are being re-released as ebooks: metamorphiction.com which makes it particularly easy to get at the source text (ssshhh, don’t tell).

The second is a bit more complex and it’s not what I’m claiming Jeff’s work to be, but rather how I think of it. I’m not going to say “Jeff’s work is all about” but rather; it seems/feels to me as though a lot of Jeff Noon’s work has parallels to music and remix/dub attitudes. Needle in the Groove is a story that remixes itself as it progresses, a number of books remix the location of the city of Manchester… or maybe they’re a cover version of Manchester.

This comes out again in Cobralingus a fictional writing engine that “ …uses the Metamorphiction process to apply the techniques of electronic dance music to the production of words, dissolving languages. In this mutated, liquid state, words are manipulated into new forms; borrowed text is sampled and transformed.”

A simple Markov chain almost certainly isn’t that but it is an interesting starting point. Music is steeped in remixes, cover versions, mashups and sampling. But this doesn’t happen in writing (probably for very specific copyright reasons), you don’t often get authors covering or remixing someone else’s story. It happens but very rarely. Where are the 7", 12", radio edit, club mix version of writing, held within the same medium of writing?

As Automated Alice is the story of Alice from Lewis Carroll’s book set in a future version of Manchester, a Markov chain allow us to throw the two books together and mix between them…

“‘Oh dear!’ Alice murmurs to herself. ‘Not only is this snake poisonous,’ replied the Badgerman, ‘and after all…there aren’t that many…’ that is what she did, she picked her way between Birdcaging girls and Briefcasing boys, ‘and the real Whippoorwill?’ she cried, ‘wherever have you flown to?’ And then cubism, because I couldn’t be doing with making calculations?”

“You MUST have meant some mischief, or else you’d have signed your name on a slight breeze. ‘Whippoorwill!’ cried Alice to the north of the ground. So she began very cautiously: ‘But I am getting forgetful in my time, but never had fits, my dear’, and she said to Alice, ‘Give yourself up! Give yourself up!’ Alice forced herself to her full size by this time, that Alice managed to find (frustratingly) that fully twelve pieces were missing from my jigsaw!”

…one Alice blending into the other.

Nola moved over the Dome’s image vanished as she whipped her scaly tail at the bar, flipping open the trapdoor and Alice did tap on the camera’s gaze, on the shelf, according to Chrowdingler, is known as Djinnetic Engineering, on account of her skin, her belly, her hands started to move! Suddenly Alice was curious at hearing this news, and the screen like a white sheet, nothing more. Had she been called, back then? And she slipped and almost fell.

Heat. The smell of my adventures!’ Alice observed to herself, ‘it’s a book beginning in C… e… y. Now what could they possibly be called? Wait a minute!’ Just then, a thousand pieces and the sounds of their pursuers dwindled away.”

A Markov chain is a blunt tool, but an interesting starting point.