I feel a bit ridiculous posting this now after it’s been sitting in draft form for months, considering one of the main points was about how rapidly things can move around the digital and physical forms, but I was prompted by this post by SOSO and Print All Over Me to dig it back out. 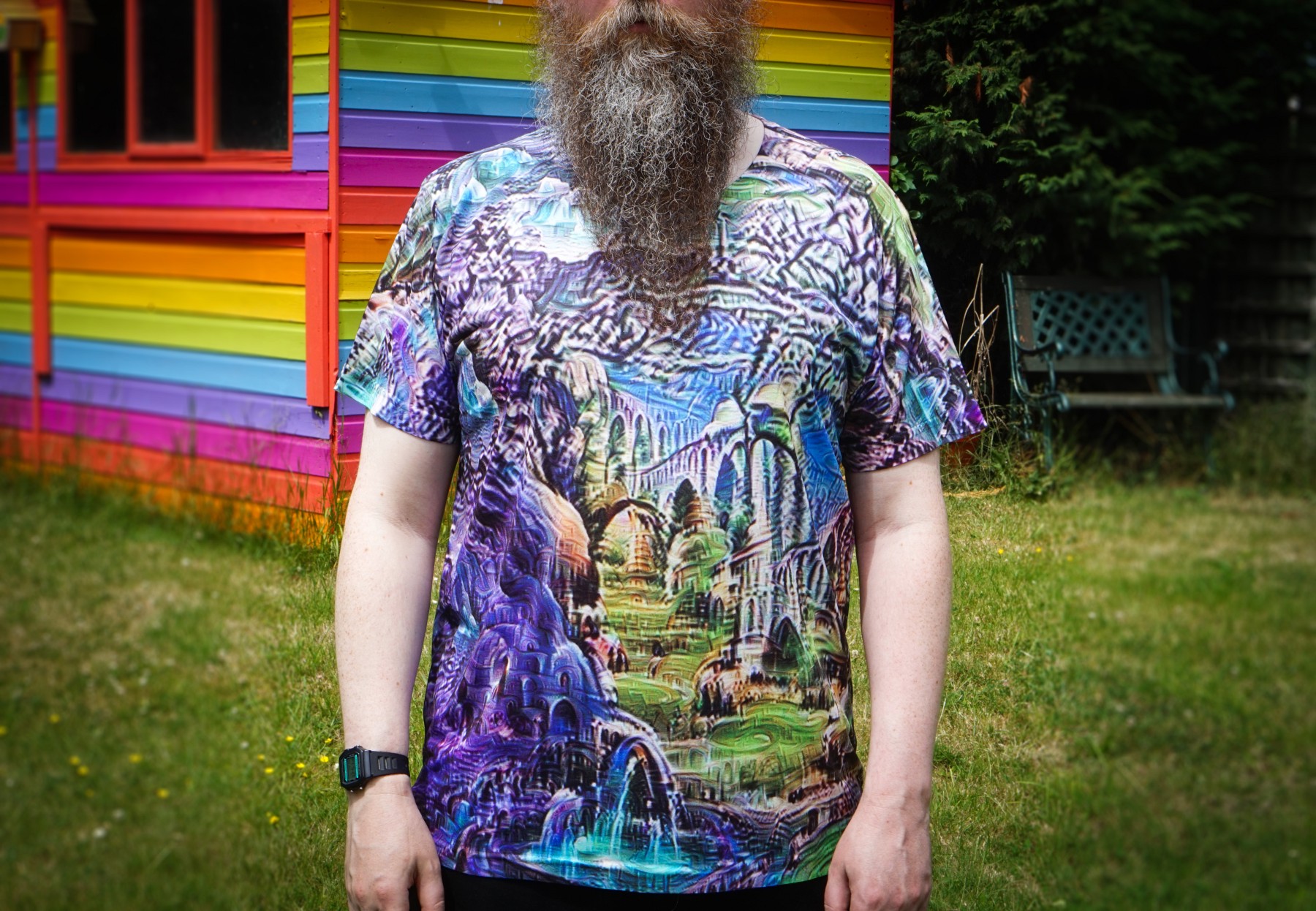 I’ve previous written about the “Deep Dream” T-Shirt in The Google AI Neural Network T-Shirt, where it took just 4 days from reading about Google’s Deep Dream to installing the software, running it and having the T-shirt printed by SubLab in my hands. I commented there that; “If SubLab had Google’s Neural Network and a shop-front you could probably walk in, say “bee hives” or “honeybadger” and walk out with a one-off custom computer AI generated t-shirt within a couple of hours. This probably already happens somewhere.”

The probably happening somewhere part is now true(er), although the turn around is a less instant 2–3 weeks. With PixelWeaver by SOSO you can indeed type in “bee hives”, “honeybadger” or as shown here “sunrise” and get yourself a custom item of clothing. 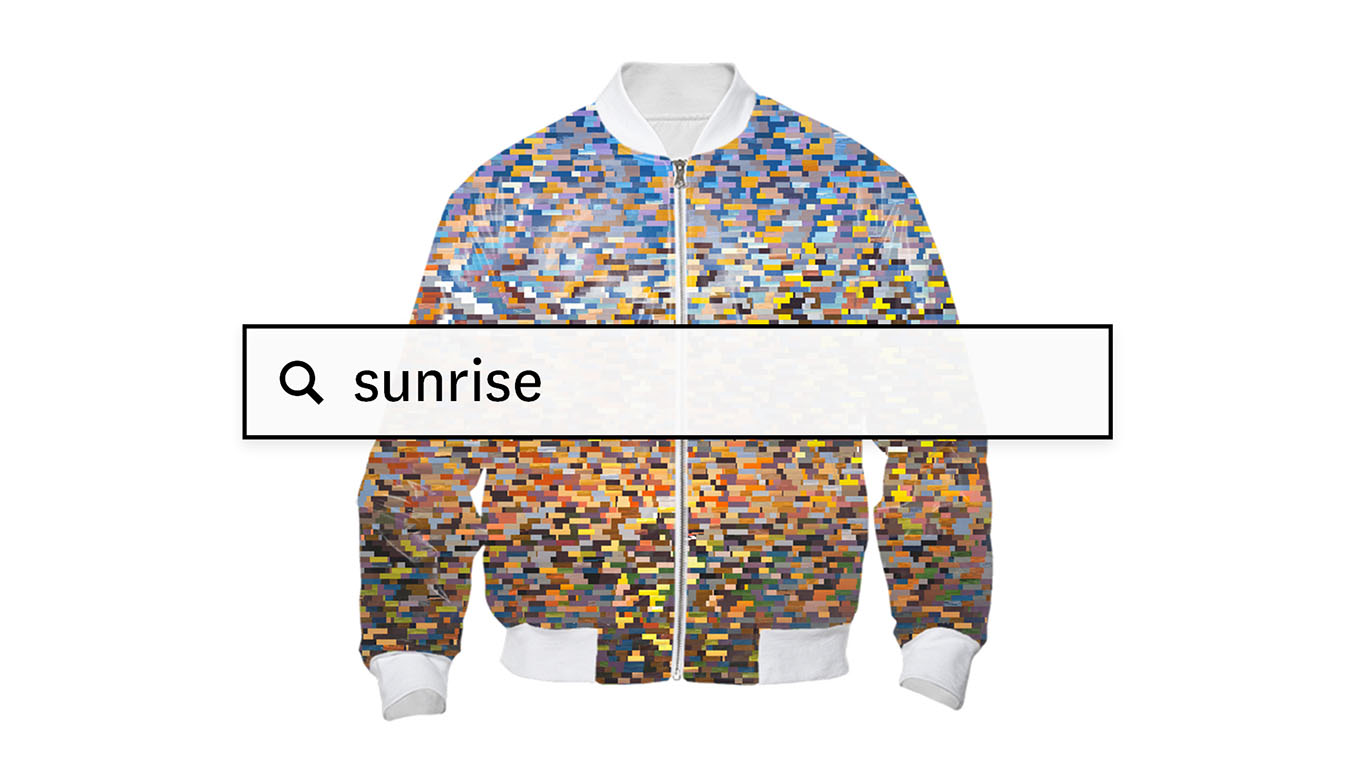 You can also use the playfully interactive app (not any more, the app appears to be dead) written by artist LIA on the Print All Over Me site to create unique clothing generated from her code and your mouse movements. With the promise of being able to upload your own code for other people to play with coming soon. Think codepen.io combined with fashion.

I have some thoughts about this, which is why we’re here, but first back to the GeoCities T-Shirt. 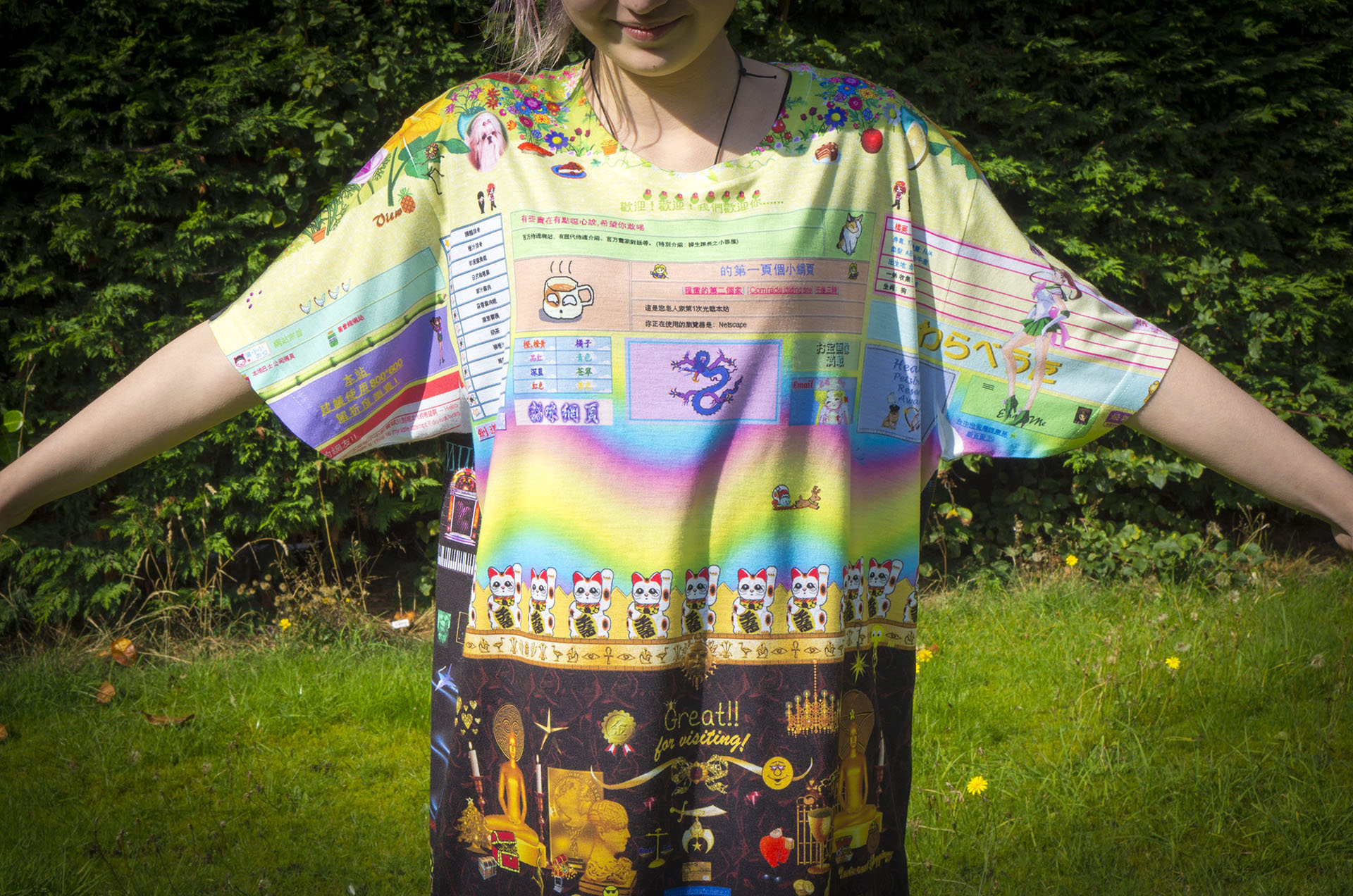 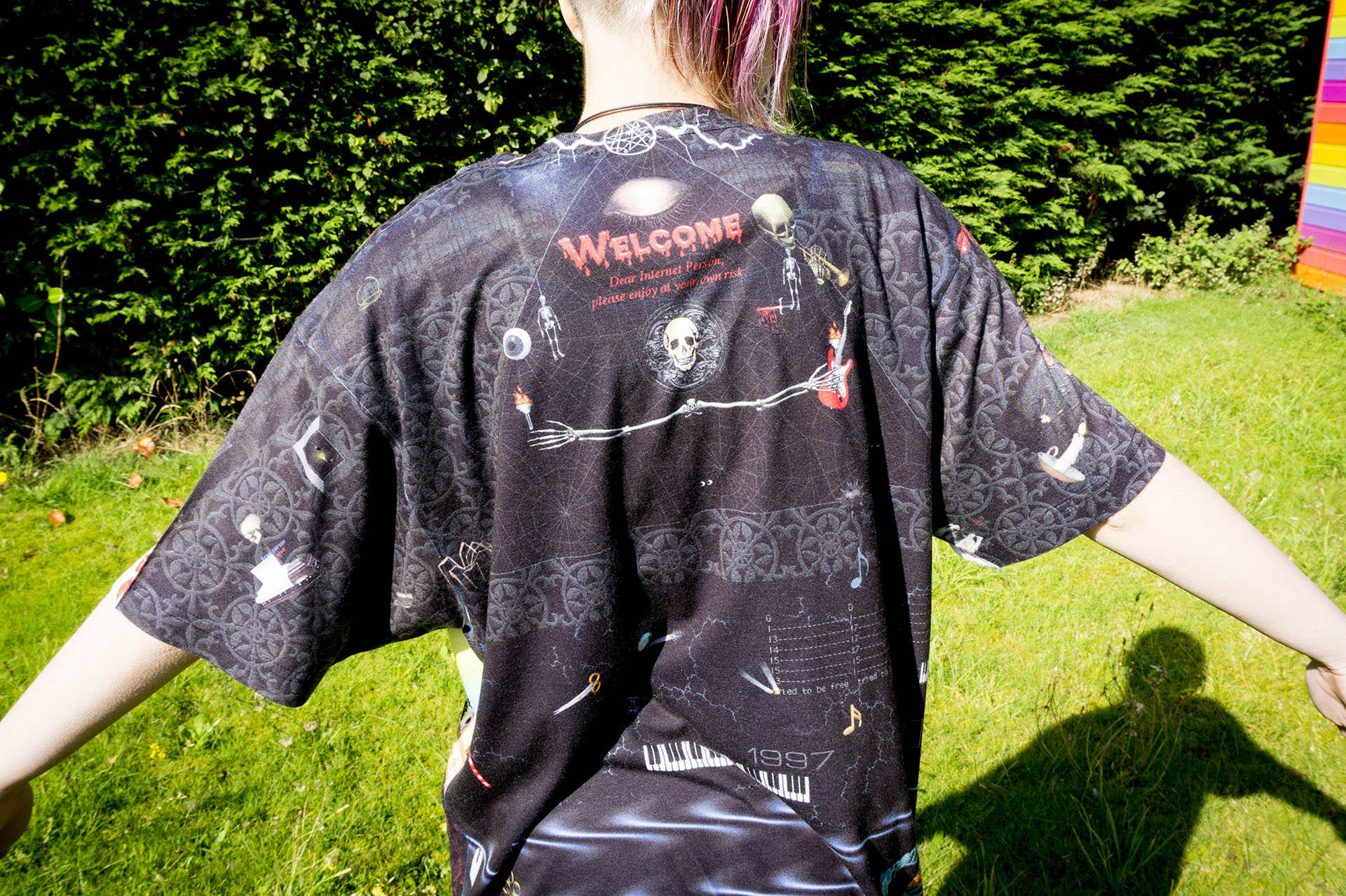 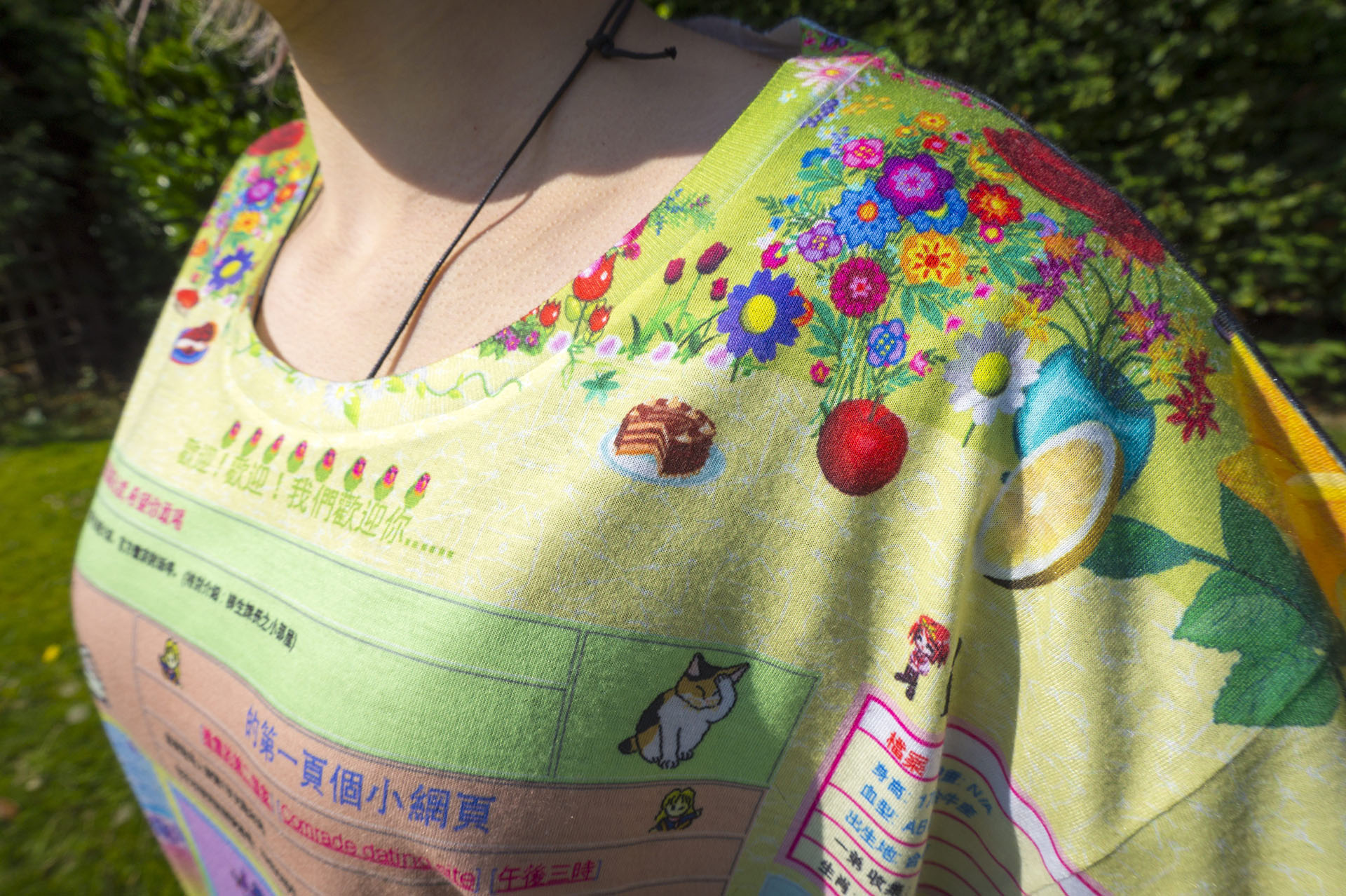 The T-Shirt is based on the wonderful https://www.cameronsworld.net/ website built with artefacts excavated from archived GeoCities pages. In Cameron’s own words…

“…a tribute to the lost days of unrefined self-expression on the Internet. This project recalls the visual aesthetics from an era when it was expected that personal spaces would always be under construction.”

This time the ever excellent SubLab (the only place I know of based in the UK cool enough to handle all over prints) had the T-Shirt back in my hands in 3 days from me first setting eyes on Cameron’s the website. Day 1 was snagging Cameron’s website then fiddling around with the design, chopping chunks out & moving elements about to make it more T-Shirt shaped before sending it off. Day 2 was waiting while SubLab printed, Day 3 was it arriving back in the post.

This is the part where I try to tie together the nature of the early web as exemplified by Cameron’s GeoCites art project with rapid custom textile printing, and why I wanted to put the former onto the latter.

Cameron sums it up nicely with “the lost days of unrefined self-expression on the Internet”, with GeoCities & MySpace and FrontPage (for those who were more advanced) people enjoyed building their own spaces on the internet without a design care in the world. Some of this sentiment is captured in Anil Dash’s excellent essay “” from 2012…

“In the early days of the social web, there was a broad expectation that regular people might own their own identities by having their own websites, instead of being dependent on a few big sites to host their online identity. In this vision, you would own your own domain name and have complete control over its contents, rather than having a handle tacked on to the end of .”

Over time things have gotten a little more refined aesthetically through the medium of hosting your own words on, well, Medium, where beautiful identical design gives equal weight to some idiot’s thoughts about what the Ruby community should do with Codes of Conduct vs a well thought out missive on the importance of putting an animated Christmas gif onto a t-shirt. 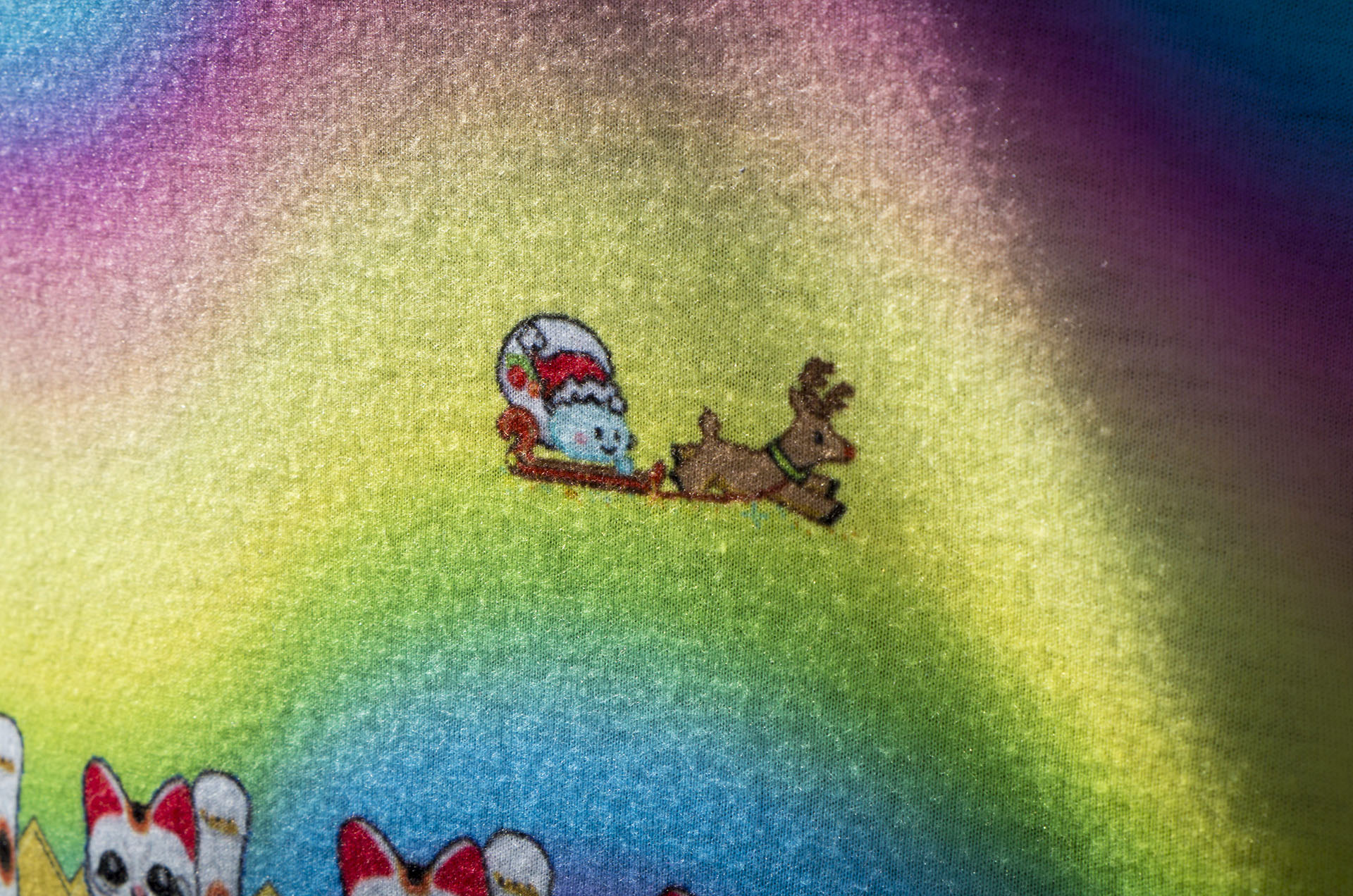 Or identikit tumblrs, PinBoard, or freedom from Facebook newsletters where you actually reach your readers.

In short the crazy wild web of the past is now all pleasing fonts in soothing shades of not quite black [rgba(0,0,0,0.8)]. When people were first able to create their own websites armed with nothing more than Notepad or a textarea the results were often bold, brash, colourful and noisy, an attempt to be unique and individual…

…it what they psychedelically screamed loudly. 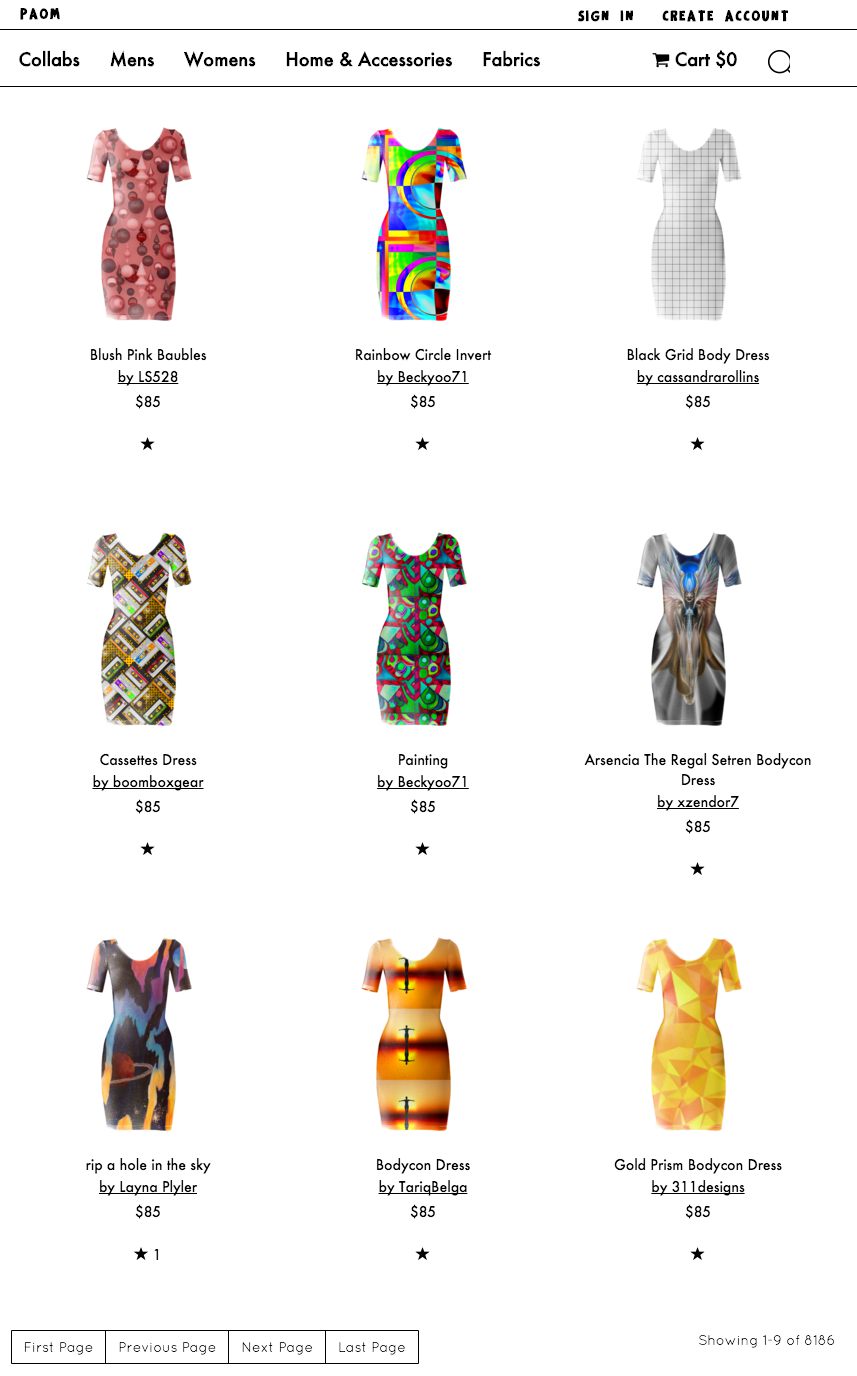 This is my hunch, this is my feels from watching custom print sites over the years from Zazzle, CafePress to Print All Over Me, knyttan/unmade and SubLab we are at the early MySpace & GeoCities point in customisable mass consumer fashion. When you can make an item of clothing completely your own, you want it to be noticed.

…in a callback to earlier, everybody’s (in a “Here Comes Everybody” sense) personal fashion spaces will always be under construction with wonderful unrefined self-expression.

At least for a few more years until things settle down, a calmer aesthetic takes over and people will define their tastes based on either current well known brands who “go digital” or whoever the future fashion equivalent of PinBoard, tumblr, Facebook and Medium are.

In the meantime I shall wait for clothes to get animated gifs and MIDI.

And it will be glorious. 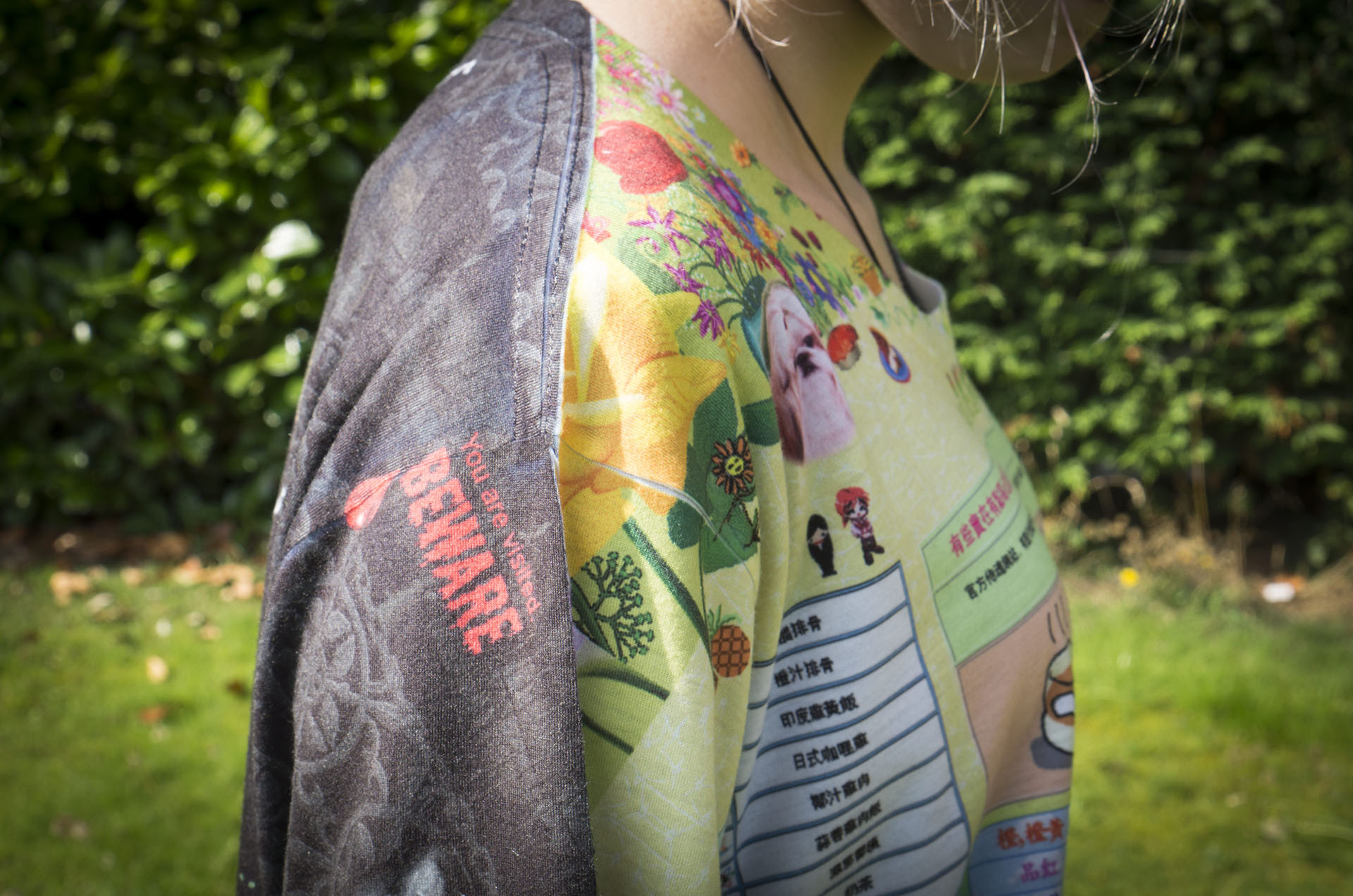 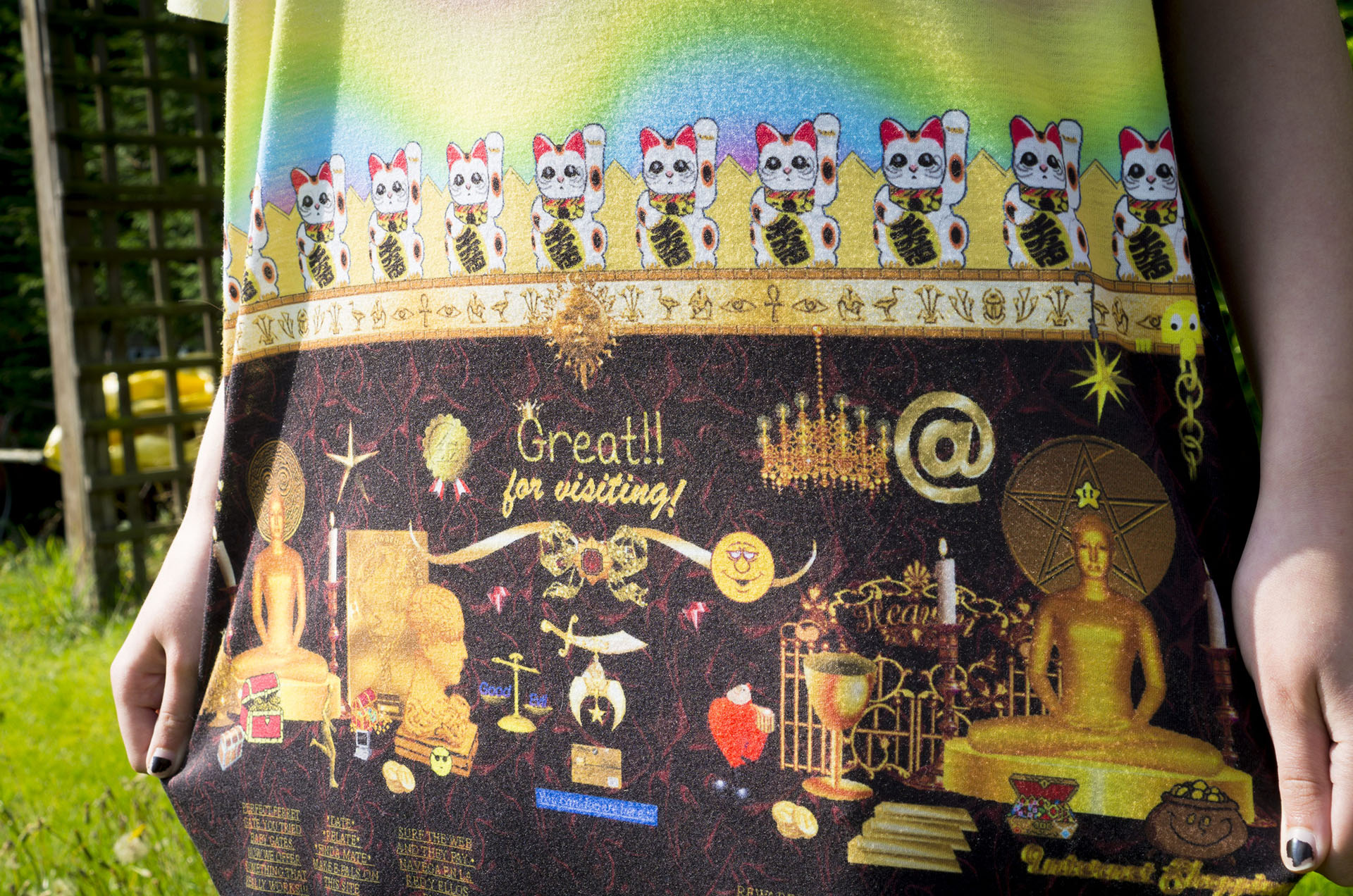 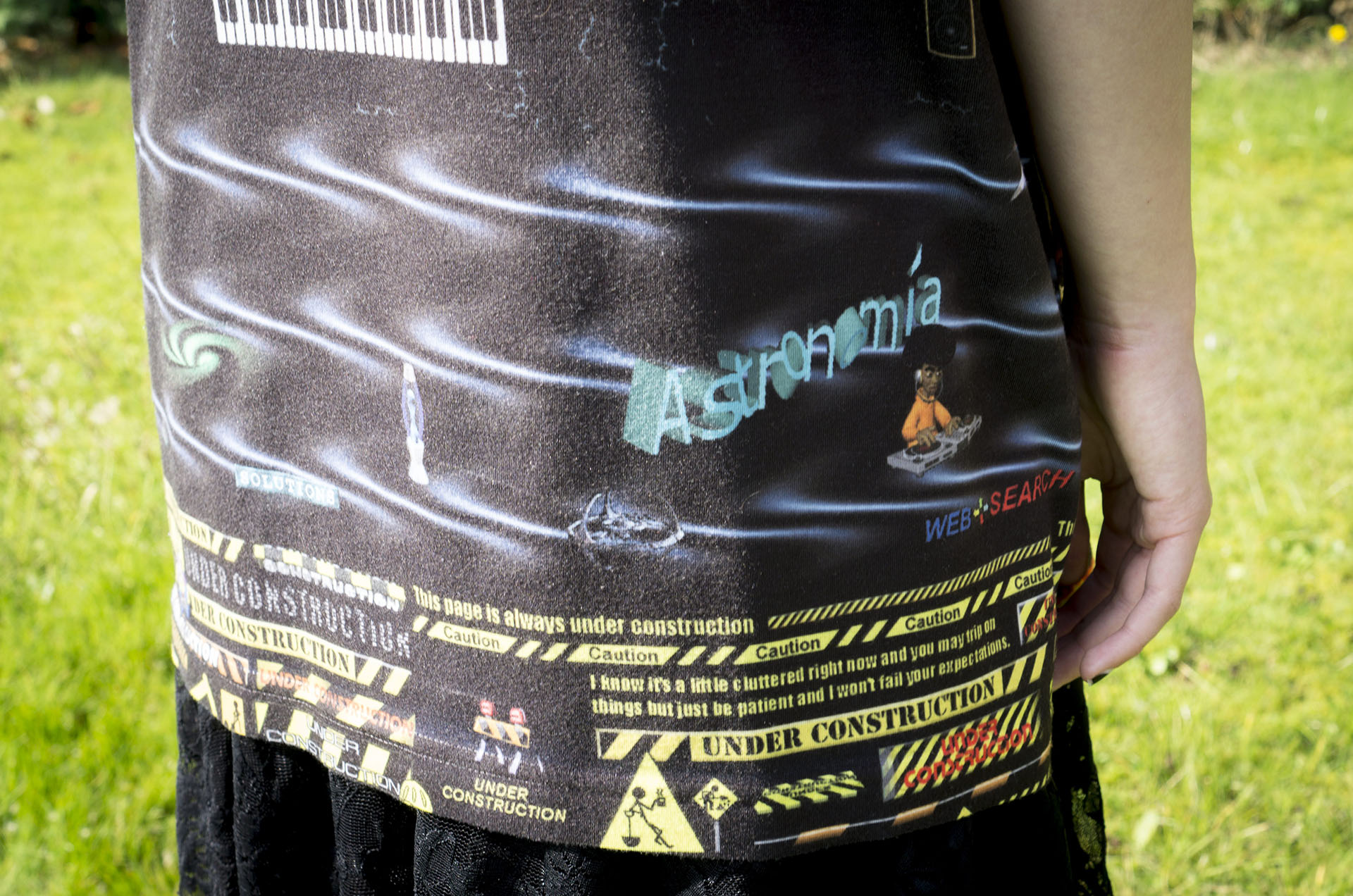