For a few glorious weeks, all my Adobe Creative Cloud apps worked. Until, well, this week... 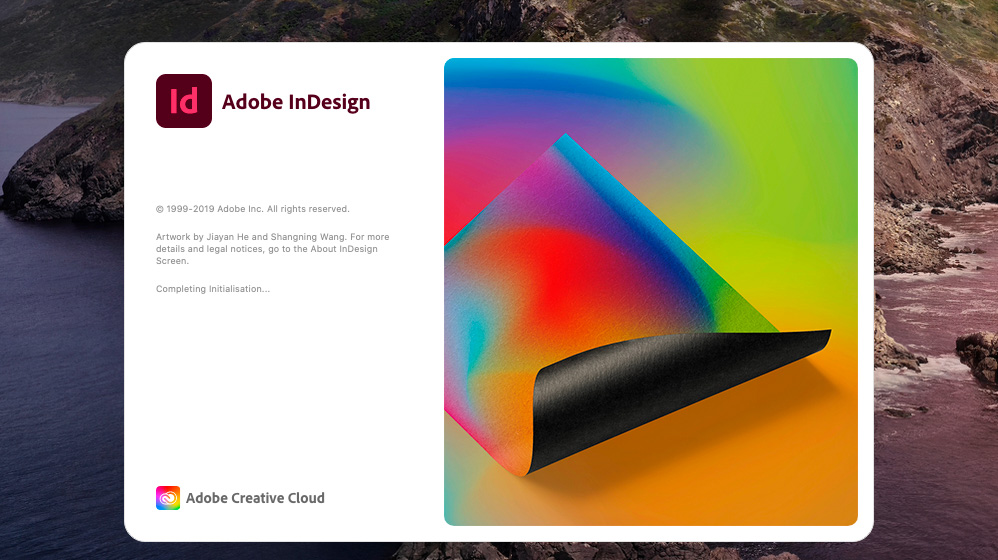 At some point, Adobe moved from selling their products to a subscription model. I use a lot of their apps on a near-daily basis; Photoshop, Lightroom, InDesign, Illustrator, Audition and Premiere mainly. At the time I did the maths, and if I wanted to stay up to date, it worked out cheaper to subscribe than buying an upgrade each time a new one came out, annoyingly.

The promise was you'd just have an app, and it'd be continuously updated with tweaks, bug fixes and new features as it got them. Which I'm totally fine with.

Instead, we still seem to have major yearly updates, instead of a constant single "Photoshop CC" (Creative Cloud) app that evolves and changes we had Photoshop 2019 last year and Photoshop 2020 this year.

All the while, Creative Cloud did its thing, updating in the background.

Later, Illustrator started working, but both versions of InDesign, 2019 and 2020 stopped working. Another update and InDesign worked, but Illustrator stopped. I assumed that after a while, enough bug reports would feed in that things would settle down.

At the start of June everything worked, finally I could fire up any of the apps and get working. Now and then, a Creative Cloud notification would pop up with an updated, and I'd get on with my life.

This week InDesign stopped working for me, soon most likely another update will probably make it work again. Various Adobe apps switching on and off is just the way things are now, I guess.

When the stars aligned and everything worked, I should have turned the auto-updates off — next time perhaps. I suspect the correct answer is to buy a whole new laptop, but that seems like an expensive solution tbh.

Honestly, on the weeknotes update front, pickings are somewhat sparse, hence the overly long story about how InDesign doesn't work. Looking through my notes, I haven't written anything else down that isn't work (learning more about Docker) or art-related.

Looking at those notes though I see my to-do lists have extended from three pages to four pages, so there's that!

Must mean it's time for art update 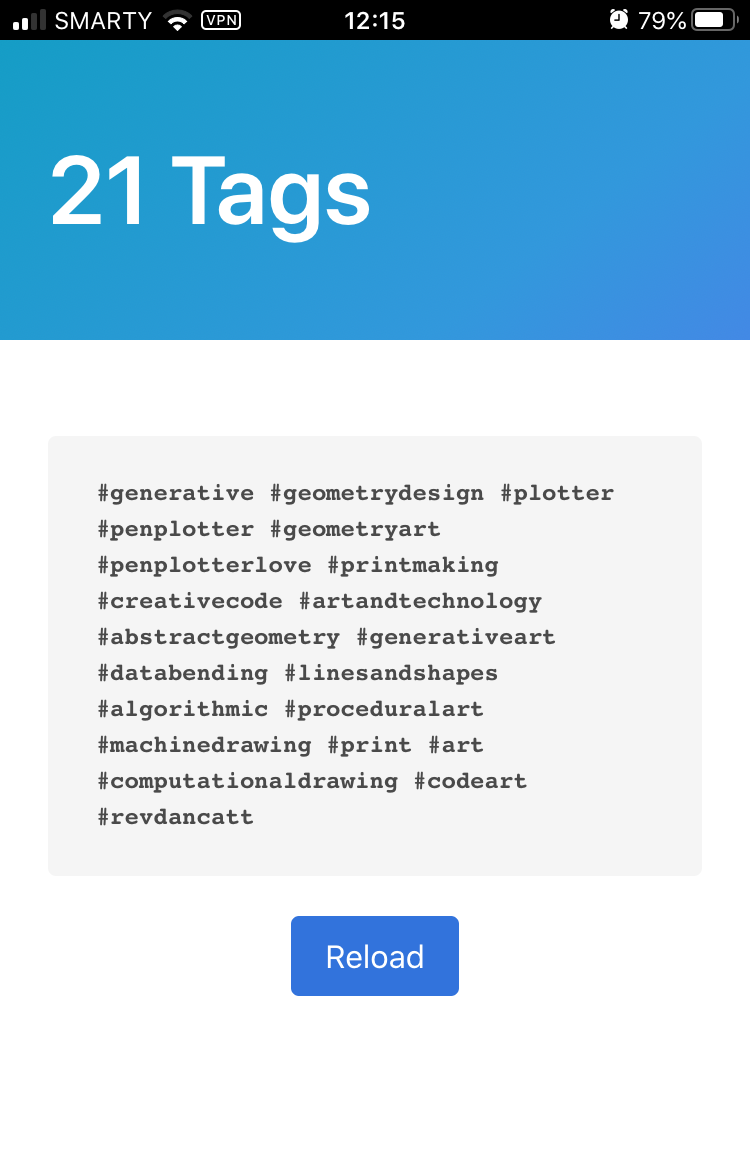 Trivial and yet satisfying code writing of the week: as previously mentioned I wrote a "Social Media Cropper" that allowed me to drop a bunch of photos into a folder, have them cropped and then add a description and tags in a really easy and streamlined way.

However, sometimes I'd snap a quick photo on my phone and want to post it to Instagram right away without going through the whole cropping/description procedure. But I still wanted the random selection of tags that I got right at the end of the Social Media Cropper.

Hence the Tag Shuffler was born, the simplest HTML page, with those fancy <meta> tags in the <head> that allow it to run as an "app" on your phone. Gives me 20 random tags selected out of a longer list and sticks an obligatory #revdancatt onto the end.

Continuing the good week for simple wins, in the art world anyway, I wrote about the "Rectangle of Doom" for Penplotting in its own post. A simple rectangle that now means I can do all sorts of nice, mainly envelope based things. 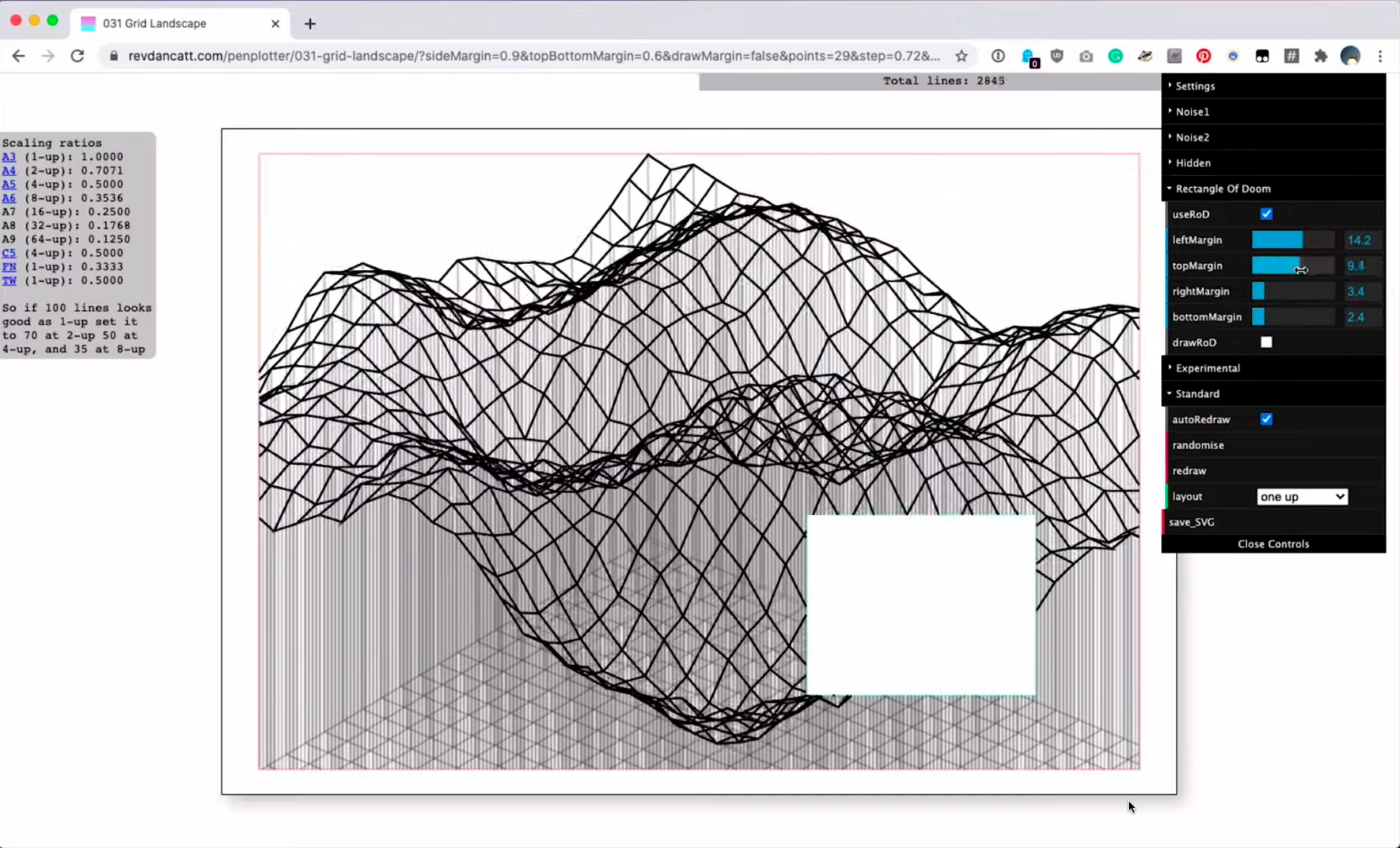 Finally I did the end of month profit/loss update. I'll save you a click, I successfully lost £221.47, although I like to think of it as an investment.

Fingers crossed that changes next month, where I attempt to finally sell some things.