I had a play with the "Dragon" update of AI Dungeon, and it's sort of amazing, especially having grown up on the original text adventure games. 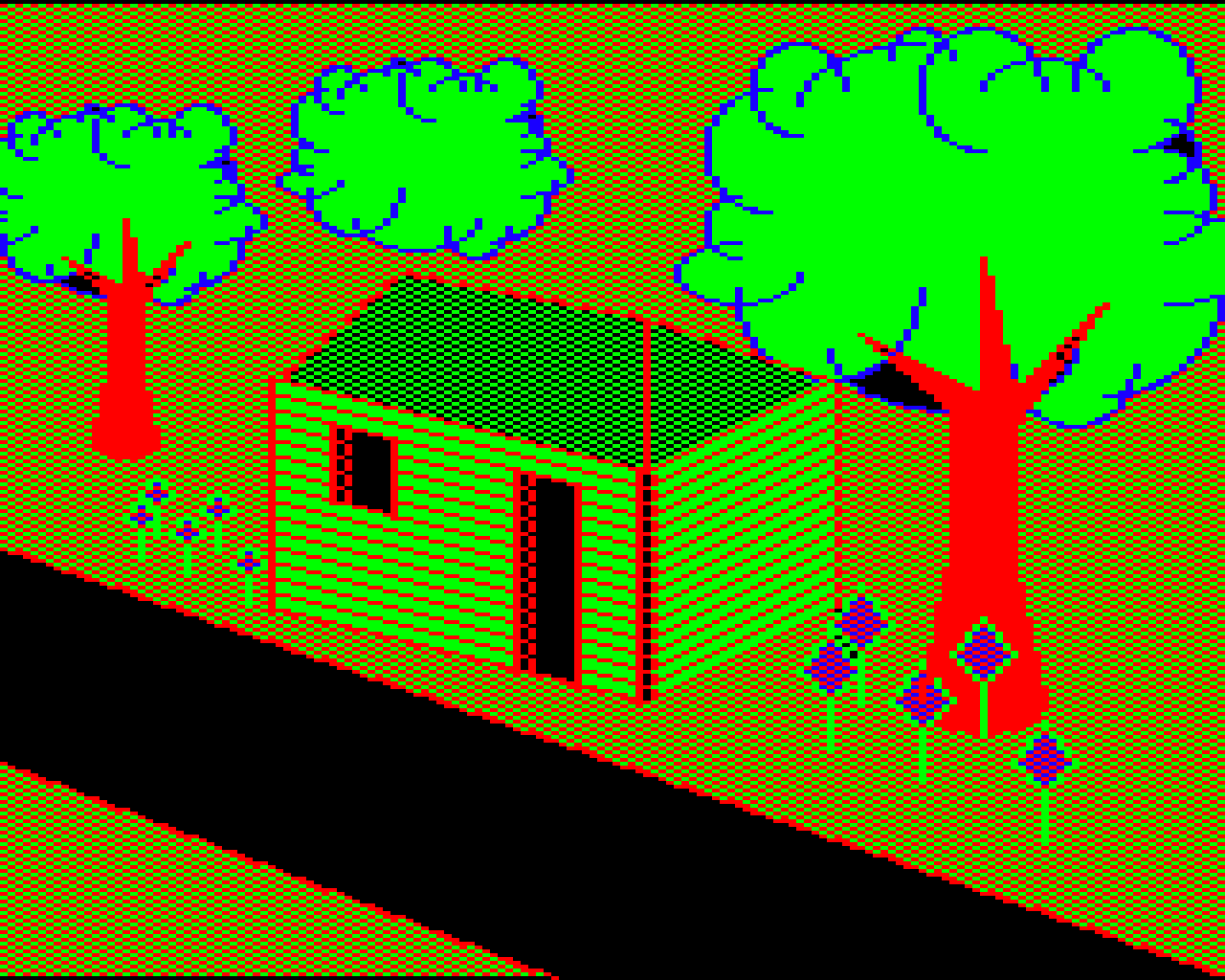 Because I grew up on text adventures, there's a bit of a mind shift I had to do. In those games, the story was already mapped out, and I was playing in a deterministic world. I would be trying to use my actions to uncover more of the story until the end.

With AI Dungeon, I have to use my actions to create the next part of the story. Plugging in commands like "Go North" would get me into another room, but it's a bit like waiting around for the action to start, and it never does. Instead, if I wanted to go find treasure in a treasure room, I'd have to steer the game towards it, with things like "Search inside the desk to find a map to the treasure room" . When I got into that mode the AI would happily come along for the ride.

Anyway, it's interesting because it's obviously rubbish, but not as rubbish as it was last year, and next year it'll be even less rubbish.

And I've seen this before. We had text adventures, and then text adventures with purely illustrative graphics. Much Like Bug Bytes Twin Kingdom Valley, a screenshot of which I posted above.

Because there wasn't enough memory in those old computers, each scene was described with simple data, like "Four trees, one river and a castle." The scene would then be drawn in "real time" (i.e. slowly). Nothing about it was interactive.

Then we had a fork, one side: point and click adventures, which removed the typing and guessing which verb-noun (and later verb-adverb-noun) combinations to use. The other side: more GUI and interaction which hid the fact you were playing a spreadsheet, i.e. Ultima games.

Text adventures evolved into MUDs and MOOs, which turned into Meridian 59 and Runescape, early World of Warcraft was pretty much a graphical skin over the top of a MUD.

Fingers cross, AI Dungeon will follow the same path, at the moment it's text only, but soon (relatively) it'll have static AI created graphics, then clickable interactive graphics. Then dynamically created graphics that represent the AI created world. Until we reach the types of games we have no, only these ones will be ones we grow from the inside as we explore, rather than ones we discover.

Back in week 29: Migraines, Radish and a Functional Keyboard I said...

"I decided that I was now the type of man who had a penknife in his pocket; I'm at the right age for it."

...so far it's primary use has been getting chia seeds out from between the keys on my mechanical keyboard, from eating Ryvita. 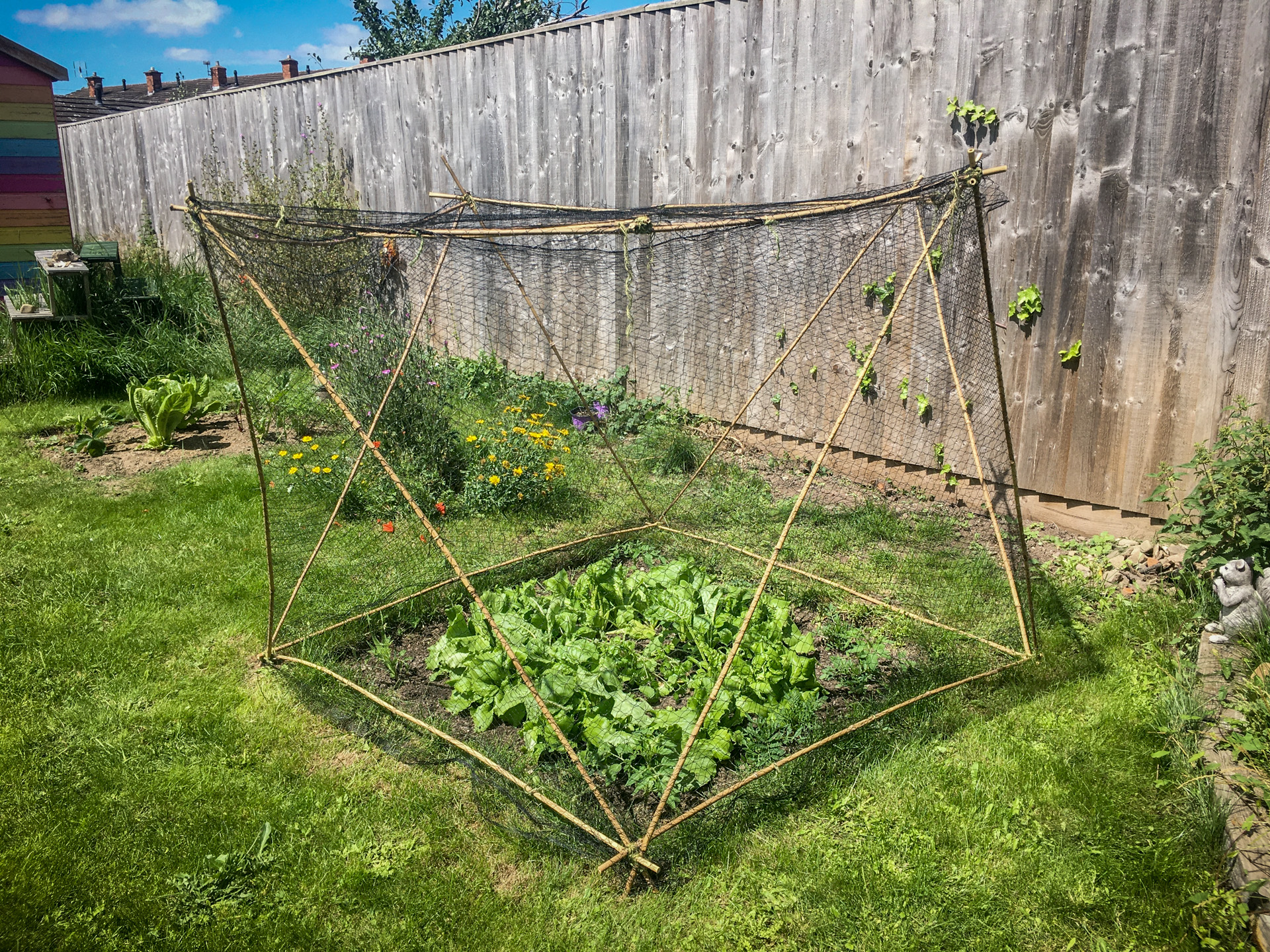 I dug three square vegetable plots in the garden earlier this year. I know nothing about growing vegetables, plants, flowers or weeds. Which turns out to be a problem when things start to grow. I'm not sure which is vegetable or which is weed.

That aside, I build a net frame to go over the top of them to keep the birds out. I decided the best way to do this was to buy bamboo canes and make my own constructions with netting and twine, rather than buy something plastic.

I based them on the boulders from The Sentinel video game by Geoff Crammond. I've always had a soft spot for them, a square on the top, a square on the base, but twisted 45 degrees and joined up with triangles 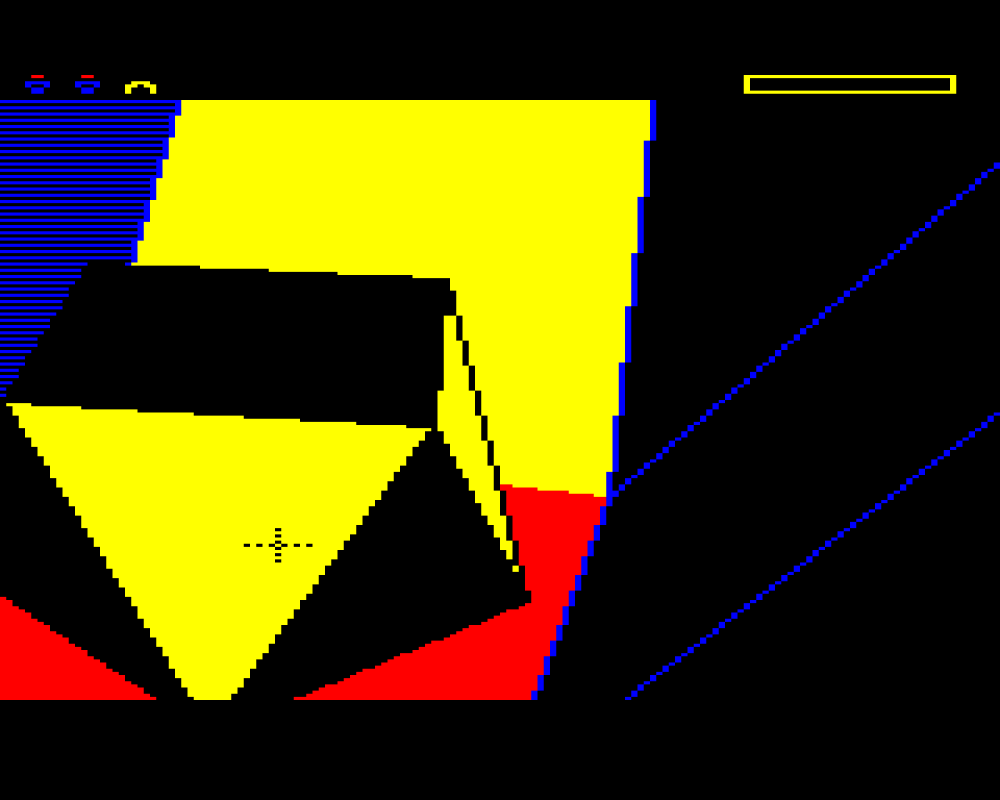 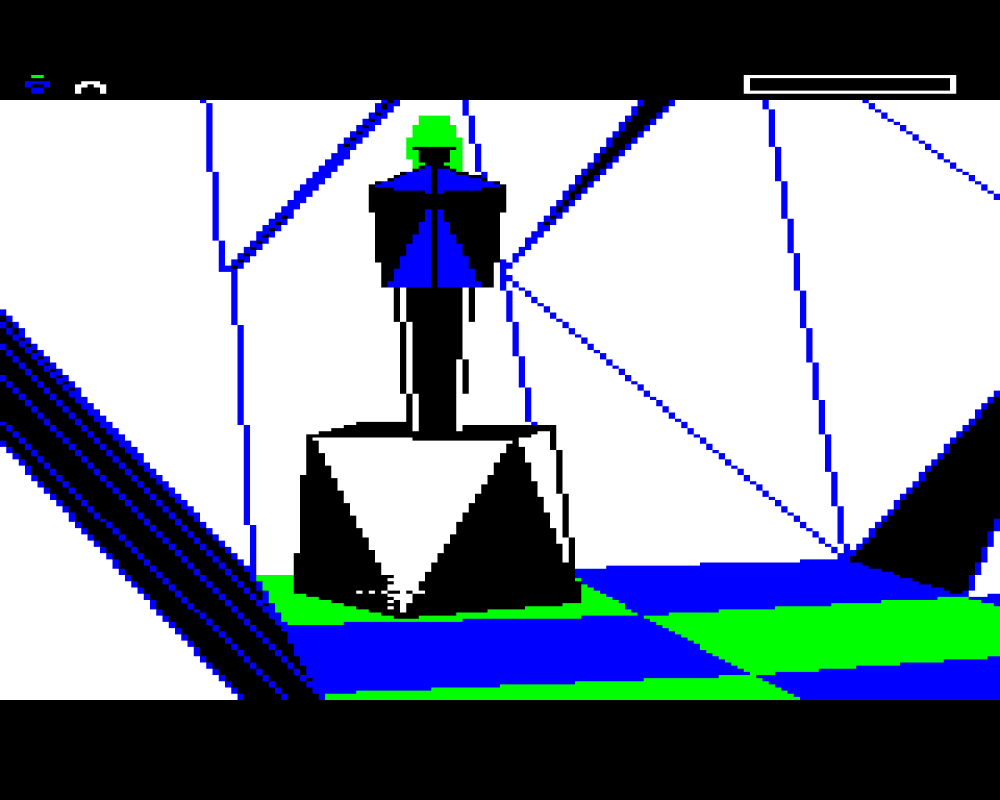 For most actions in the game of Sentinel, you needed to be able to see the "floor" of each tile, to either absorb what's on the tile or place a boulder down. However, with the boulder you can place another boulder on-top, just by pointing at it, thus you're able to quickly build boulder stacks. In a game where gaining height is the main path to winning, the boulder-stack-strategy combined with good energy management would propel you through the first few thousand levels with relative ease.

And now I have them in my garden and it makes me smile each time. 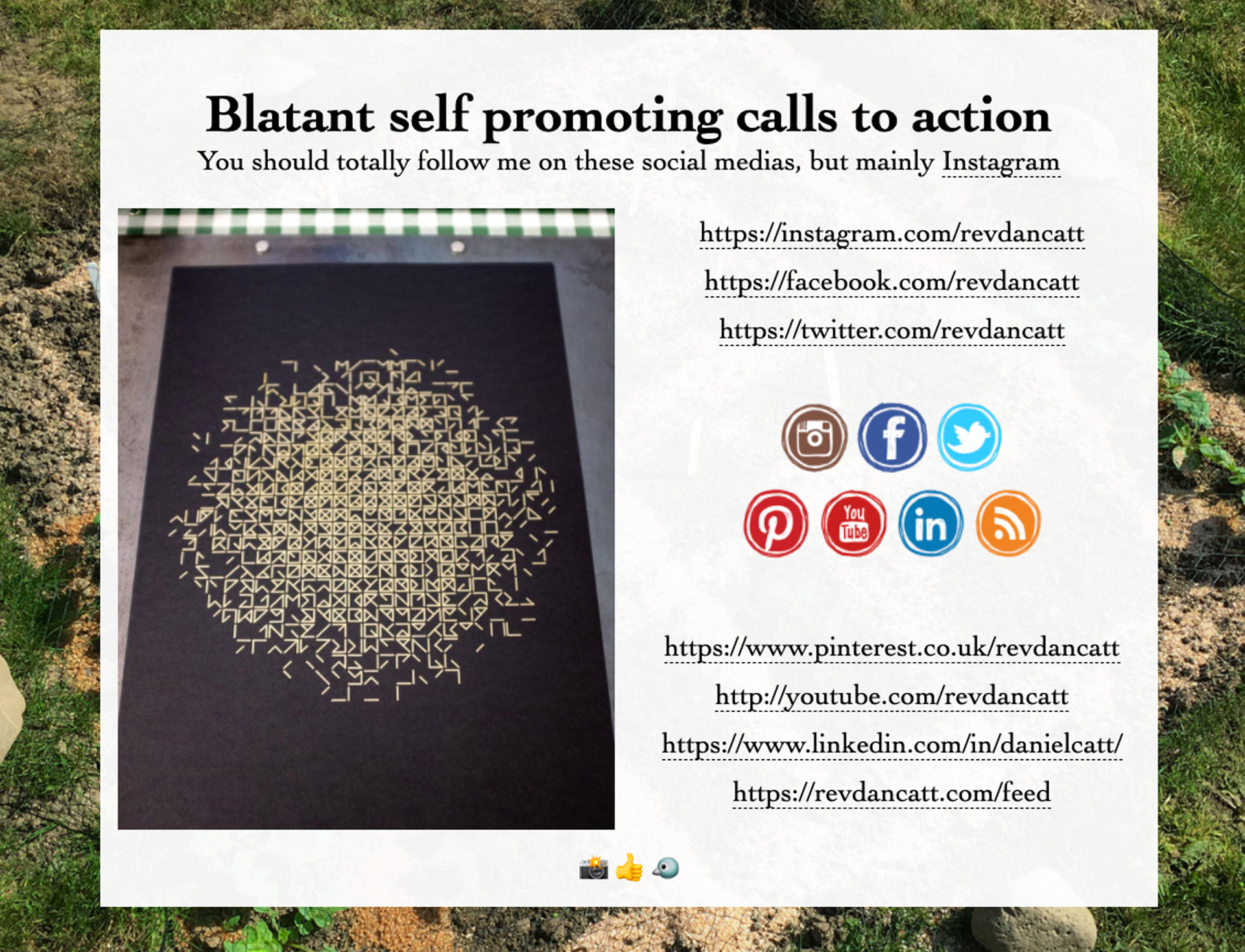 In exciting website news and tradition of doing all the things you were supposed to do 15 years ago, I've added a "call to action" section at the end of each blog post. Traditionally if you didn't have something like this an SEO specialist would come to your homepage and tell you off for not correctly funnelling your target audience and leveraging cross-platform synergies.

Of course, no-body will see it, because everyone reads this via RSS. But you can bet your bottom dollar that this "call to action" will be spliced into the RSS feed with the predictability of a Square Space advert on a podcast, at some point in the future.

Just before webrings, but probably after Gravatars created from six polygons shoved down a well.

Not much of an update this week. Nothing new purchased, no artworks sold.

Didn't write the blog posts about pricing or inspiration, but I have started plotting out a series of tutorials to write, so that's even more on my plate.

I also decided to plot a handful of artworks around the drapey-cloth "ghost" plots and call it "Season of the Ghost", which I'll put up onto Etsy for a week to see how they do.

The idea is to have a different "collection" each month, that I put up for about a week, aiming for the 2nd week of the month. Which I obviously failed at this month, there's still a chance I get my shit together to get things set up to sell in the last week. Then next month the 3rd week, until I get back on track in September.

Things that don't sell will go into the "Archives" or "Vault" (and yes I love using quote marks), and at some point, I'll bring them back out give them one last chance to sell.

I haven't figured all that out yet, but I'm getting there.

I will try and refrain from calling it a "Drop".