This year we've had three whole strawberries from the garden. If we're lucky, there'll be a couple more before the end. 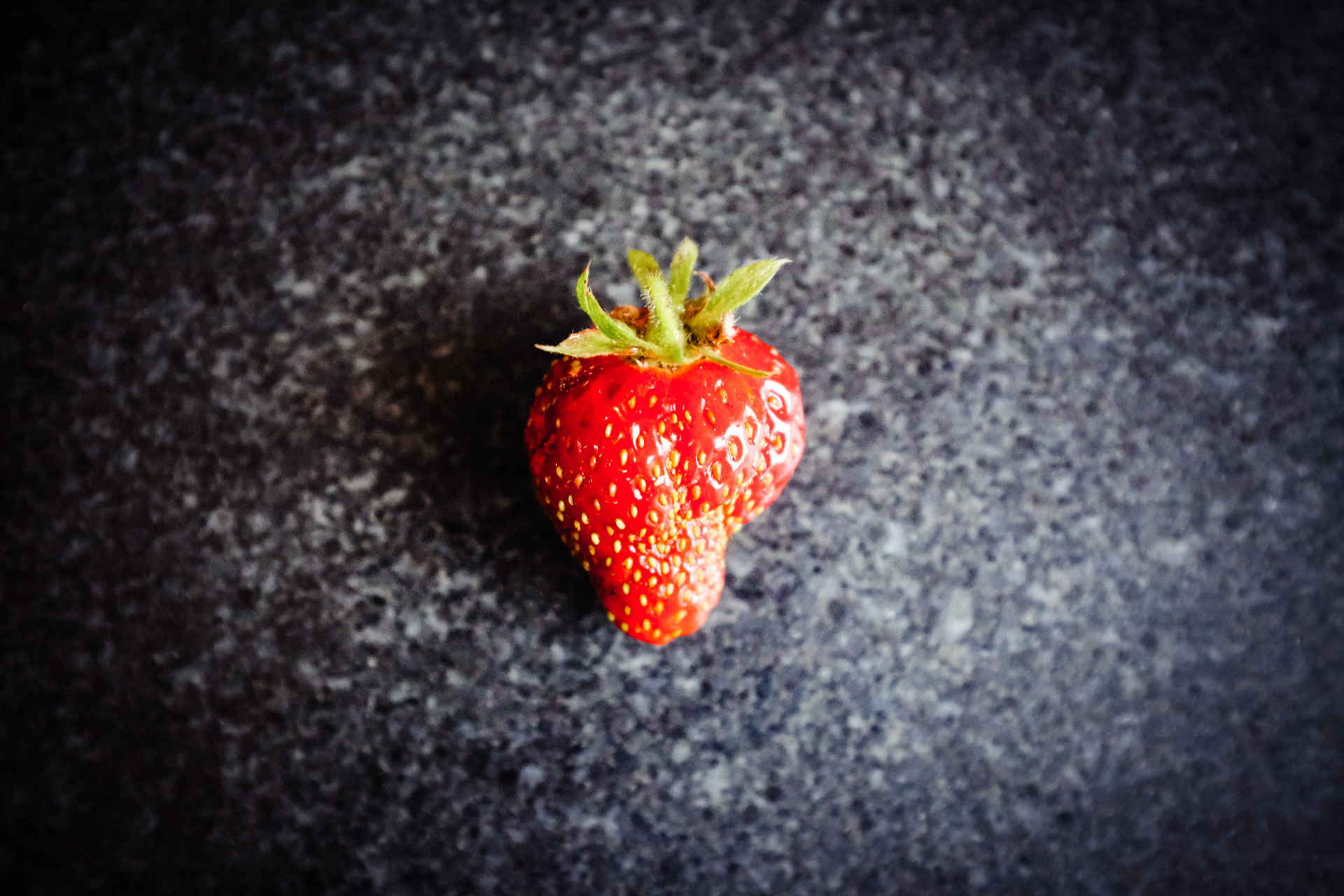 Website update, I added trackbacks, well, kinda. If we go back a couple of weeks to: Weeknotes 032 - Making all the things at the bottom of the page, it shows you this... 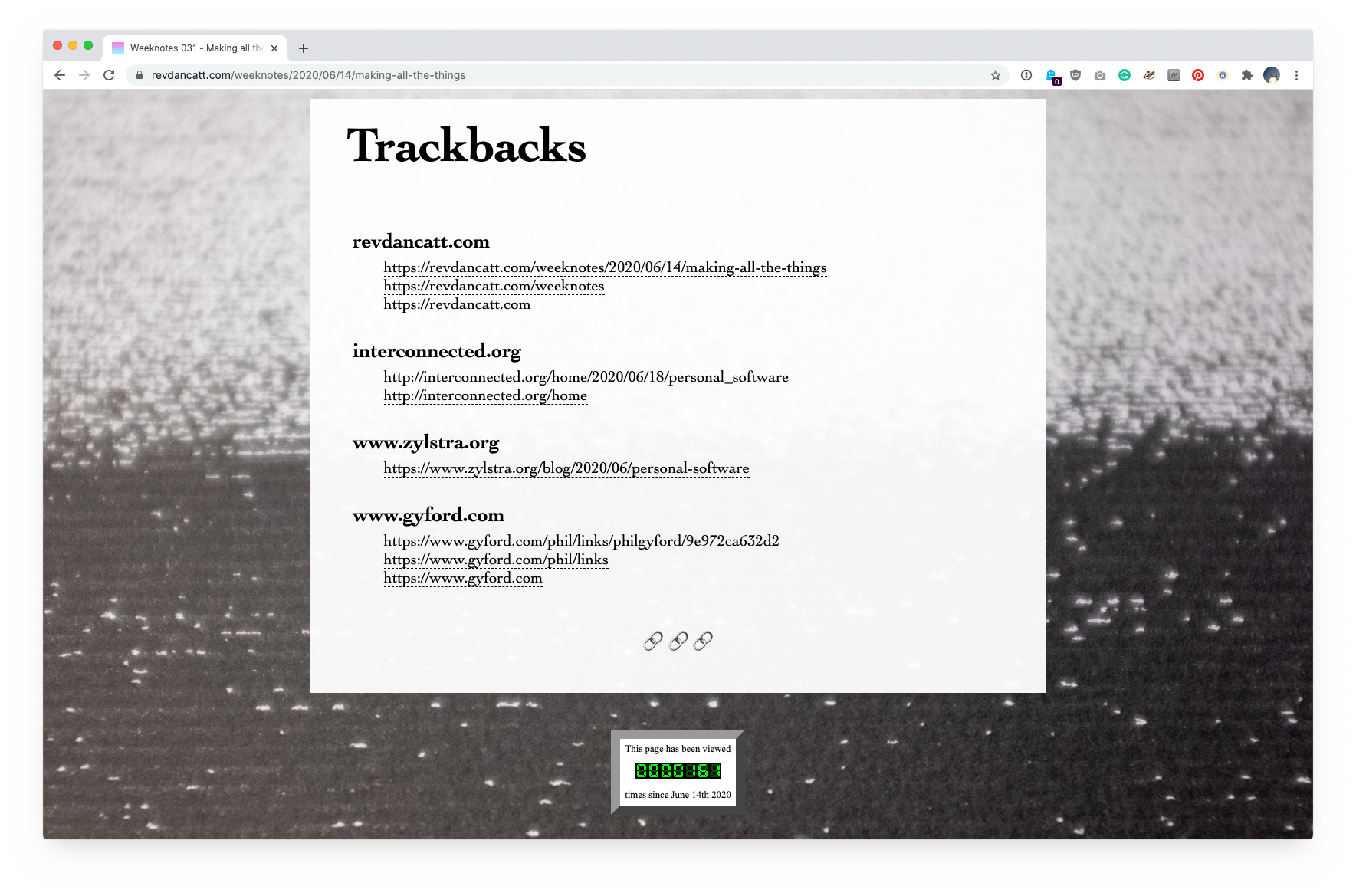 I've been keeping an "accurate" view count for a while now by telling the backend to stuff the request.headers.referer into a JSON file along with the number of times it appeared.

Which means it was only a matter of time before I started digging those referrers back out again. Aside, I don't have Google analytics on the site because blergh, but I do have something that crunches the NGINX log files. But because those logs are all server-side and I can't be bothered to jump through the hoops to turn the front-end dashboard for them on, I hardly ever look at them.

There was a time once when going "viral" meant that one of your blog posts from your probably not very visited blog got linked to from a much larger blog that many more people read, which increased the chances of it getting listed by an even larger website that, well, pointed at blog posts around the internet.

All of that would mean that suddenly lots of people would click on a link to your blog post and your server would crash because it never was designed to cope with that many people. This was called the Slashdot effect, also known as the "hug of death".

This was both fun and terrifying, fun because lots of people would suddenly be turning up in your corner of the internet, some may even stick around increasing the subscriber count to your RSS feed. Which was in turn good because if you got enough visitors, you could monetise the fuck out of them and win a Webby award or something. Terrifying because your website melted.

This trip down memory lane is a very long way of saying; links between blogs used to be very important, almost a form of currency, where high numbers are good.

This blog post has a meagre number of view counts. It's fair to say that I would have a tough time monetising the fuck out of my readers. And yet I still choose to display the number because, because... ummm, I find it funny. But that's my choice.

When I first added the trackbacks to the bottom of the page, I also included the number of times someone had visited from the other site. And those numbers were even smaller, for perfectly logical reasons.

It felt wrong to show them, I mean they were my numbers, they ended up in my JSON file, which sat on my server, the number of times that someone arrived from that other page. But it felt like they weren't really my numbers to tell. After all, the people started the trip to my site at the other end of the link. The far end of the link belonged to someone else, and I was displaying how many people started the journey on that other site.

Or put another way, it's not my place to allow anyone to infer how many people read Phil's blog and thus ruin his chances at monetising the fuck out of his own readers, by splashing referrer numbers on my site for a stupid project.

Which is a lot of words to say "I did a thing and then I slightly changed how I did the thing", but it's my weeknotes, so that's how it goes.

Really I was going to talk about how tricky request.headers.referer is because people seem to "refer" in from the weirdest of places, for example; the Terms and Conditions page for The Times newspaper, some random .jpg on some random WordPress blog, or seemingly every sodding page on the MacProVideo website. What I think of as a "referring" page and what computers say are technically "referring" pages are obviously two slightly but annoyingly different things.

Then I was going to go into how I had to build a whole approval/rejection process for trackbacks to make them show up, and finally something about how three-quarters of people come in from RSS readers anyway. Still, I'm not going to show "Feedly" in the trackbacks. So even though X number of people came from Phil's Blog, 3*X came from the RSS reader view of Phil's Blog.

But I'm already nearly at 1,000 words, it's 9:19 p.m. on a Friday, and the trackbacks was only supposed to be a stupid throw-away thing anyway. And no, I'm not going to implement Webmentions, because that's way too much effort. 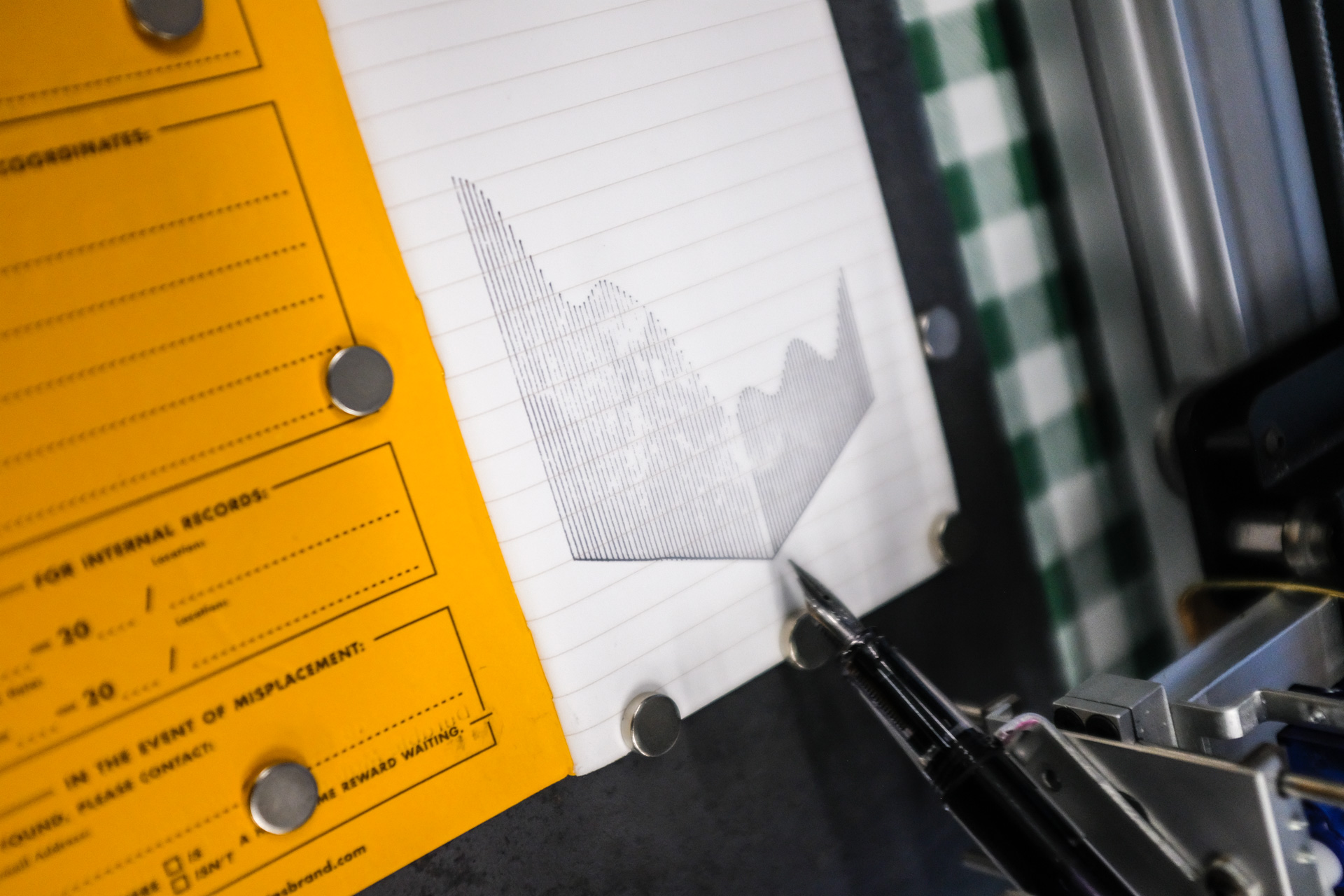 Adrian pointed me to this blog post about selling pen plotter artwork: Inconvergent's Making Money, via this tweet.

"Given @revdancatt's interesting and open blog posts about working out the business side of his art and #plottertwitter work, I suspect he's already seen @inconvergent's post about the finances of his art. It's an interesting read.

Spoiler: I hadn't already seen it.

But is pretty much the post I wish I'd written, or was planning on writing. The type of post that would have made me go "Oh well, someone else has already done it, so there's no point now" in the past. Now I know that's terrible thinking and what other people have or haven't done shouldn't really affect what I was planning on doing.

During the week on my walks to work and back, I've been thinking about this weeknotes post, about writing up how I've gone about pricing my artwork (that I'm not selling yet), and the process I go through when coming up with a design.

I'm not sure though how well they fit into "weeknotes", I like the weekly artist update; however, somethings would work better as separate posts that I just link to from here. Which is another way of saying "I thought about writing about these things, but I'm not doing it yet", the best kind of blogging.

Actual update, I've taken on another studio space, it's in the same building (we are in an old converted supermarket) but around a corner. I like my studio; it has everything I need to make art, but I have to move things around when it comes to mounting, framing or getting things ready to post out.

Now I have what I'm calling the "Mail Room" which has all the postal and mounting stuff in, it's very much like playing post office, but for grown-ups. The other half of the room is going to be a pretend gallery where I can hang work to take photos of it looking "proper".

I've been meaning to take a photo of it all week, but things just didn't work out like that, guess I get to save that 'till next week's update.

Another mild update, I finally added page size links to my JavaScript SVG tools, which I use to generate my art. At the same time, I added the sizes for Field Notes sized notebooks and TWSBI notebooks that I use.

Which means I can now very easily create plots for A3, down to postcard size and pages of my notebooks, which is very satisfying. There's something very lovely about tiny plots in tiny notebooks.

I put a new tool, the Spirotron online too, I don't advise you to click that link. I told myself that I wasn't allowed to write or publish any new tools until I'd written instructions for all the ones that I've already put up. More bad thinking.

In the end I decided it was better to have it available without instructions and let anyone who dares to fiddle around with it. It's also super handy to have online so I can access it from any machine I'm using, like the one connected to the pen plotter for example, than just running locally and having to copy the SVG files over.