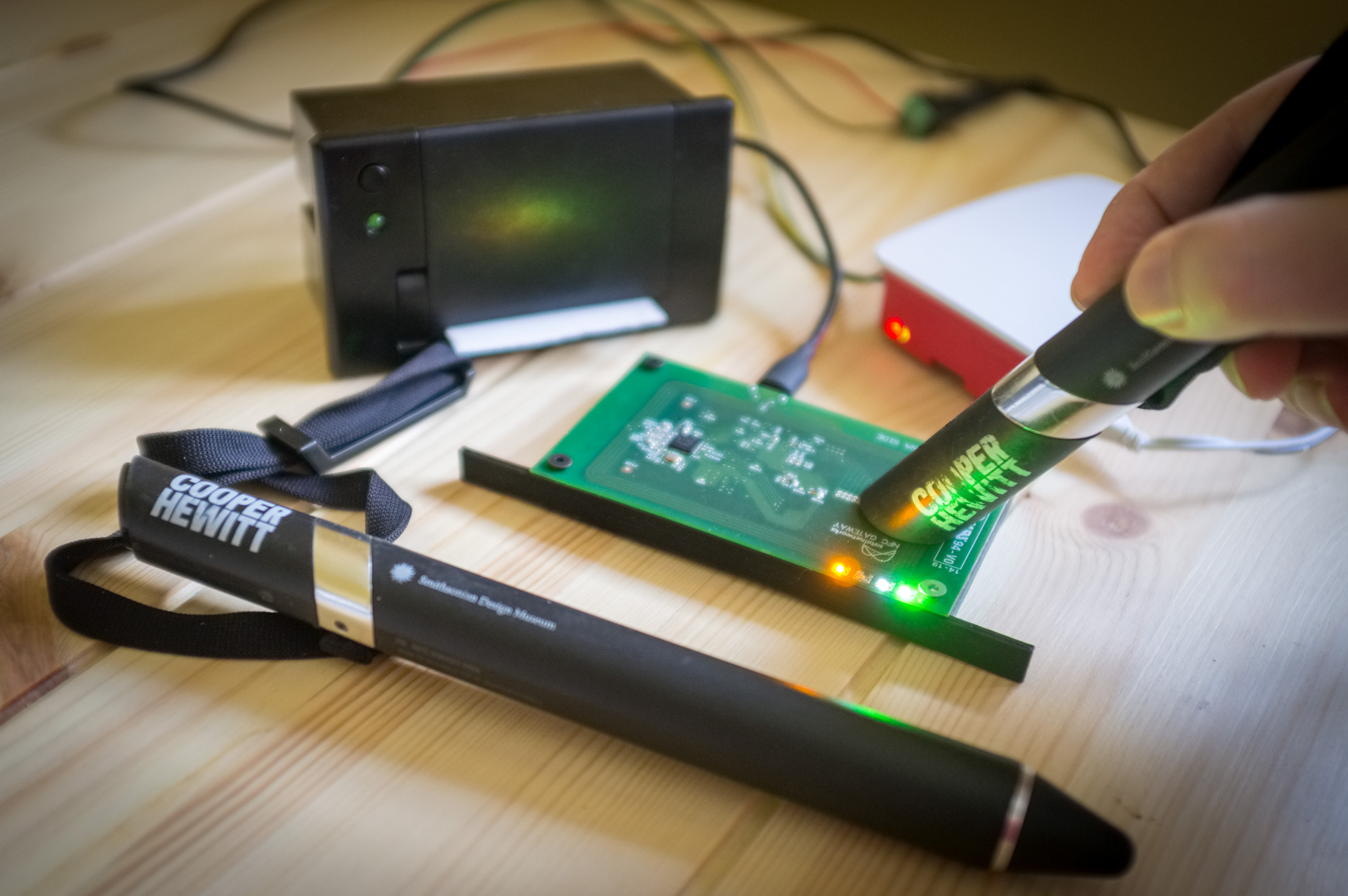 Aaron has a lovely post up called "bring your own pen", which is "about" the Cooper Hewitt Pen, but is also about APIs, and access to cultural heritage no matter where it is.

The funny thing about APIs is they are often an escape pod for the people who write them or a digital key-card to the seed-bank of whatever they are leaving behind.

When you work for a company, you are hopefully doing it because you love what they do. I worked at Flickr, on the geo part of it specifically, because I have an interest in preserving photos in time and location. The Guardian because I believe in the freedom of the press and preserving stories of people's experiences. I work with museums because keeping stories in time and location is... well ok, let's say there's a pattern here.

Things change, people move on. But sometimes, I'm pretty sure developers work on building APIs, so they'll still have access to the data once they leave, it's like our very unsecret backdoor into the database.

Us tricksy developers, tricking large organisations into sharing all their data so we can tinker with it in our digital sheds once we retire. I'm being glib and painting a skewed picture for dramatic effect of course.

I had to write some code for interacting with the pen when the Cooper Hewitt come over to London for a show. Which was a fun bit of NFC reading and writing. Roughly NFC stickers, embedded with the ID of an artwork were stuck up alongside said artwork. When you poked the pen at the sticker it would slurp up the ID into its little pen body. When you got back to the desk, you'd press the pen against a reader which would suck all the ids back out of the pen, leaving it empty for the next person.

A raspberry Pi would then assign an ID (a London Integer of course) to your list of IDs, while a tiny printer spits out a receipt with the IDs and website URL on where you can go to revisit all the artwork that you zapped.

It's actually quite a fun experience. You walk around a museum and zap, zap, zap, zap, tada, you now have a webpage you can visit telling you all about the things you decided to zap. Someone else goes zap, zap, zappity, zap, they get their own page.

I accidentally ended up with a couple of the pens that failed to get on the flight back to the Cooper Hewitt, and now they live with me in the art studio. They always make me smile when I glance at them.

The tiny printers and raspberry pies, however, are stuffed into a drawer waiting to be rediscovered. 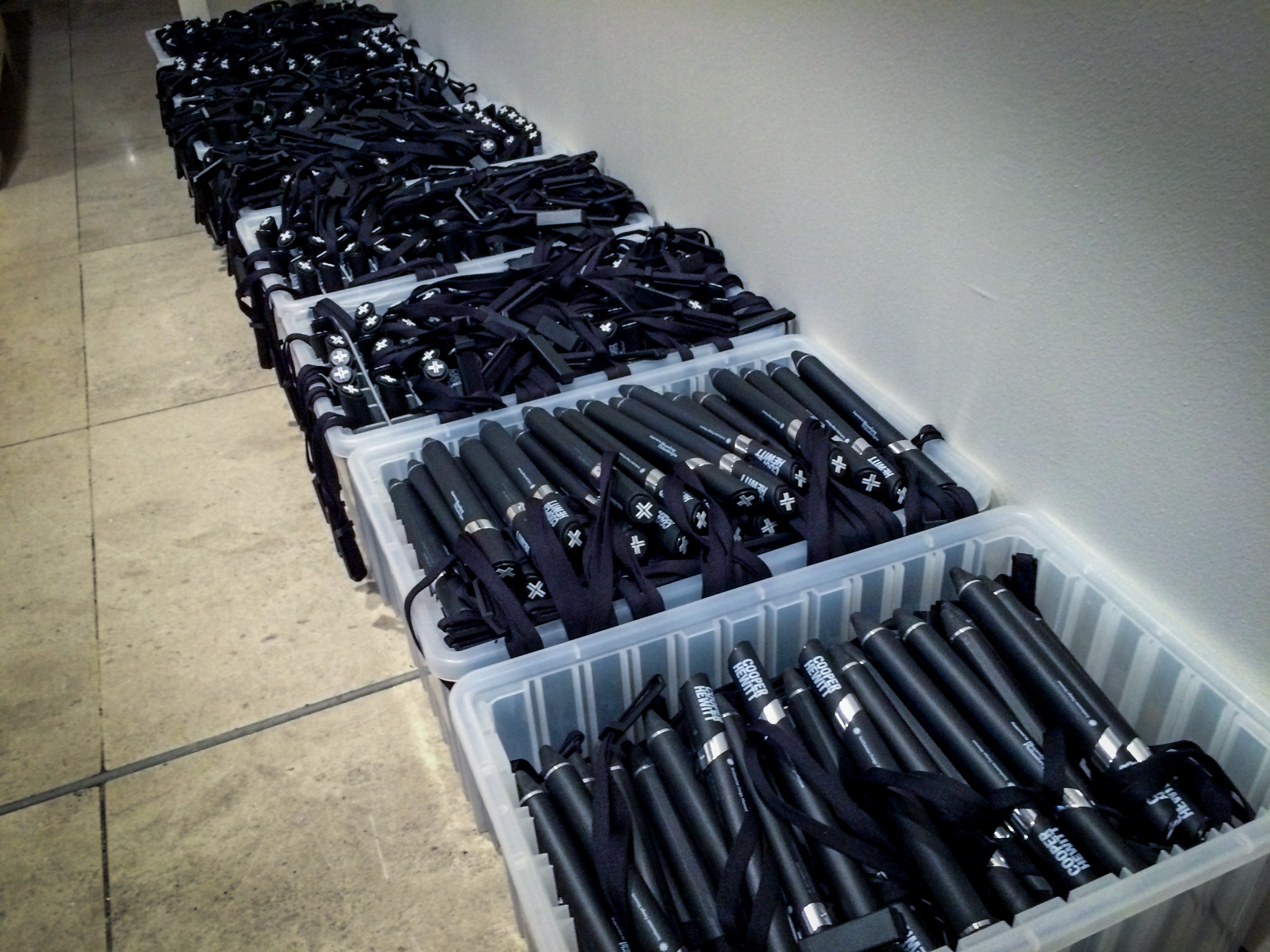 One, I started storing my gardening hat in a new location, and checking for insects before I put it on is now a thing I have to do.

Two, seems OS X doesn't have FTP on it, as for the first time in years I needed to quickly FTP somewhere and apparently that isn't a thing any more. I'm sure telnet is still there, right?

Three, Adobe updated all their apps, and now Illustrator and InDesign work on my laptop again, thank fuck.

We got speakers for the TV. I am mildly amused that when you first turn them on anyone who is talking has an intense deep voice for a few seconds while the EQ works itself out. I am easily amused. 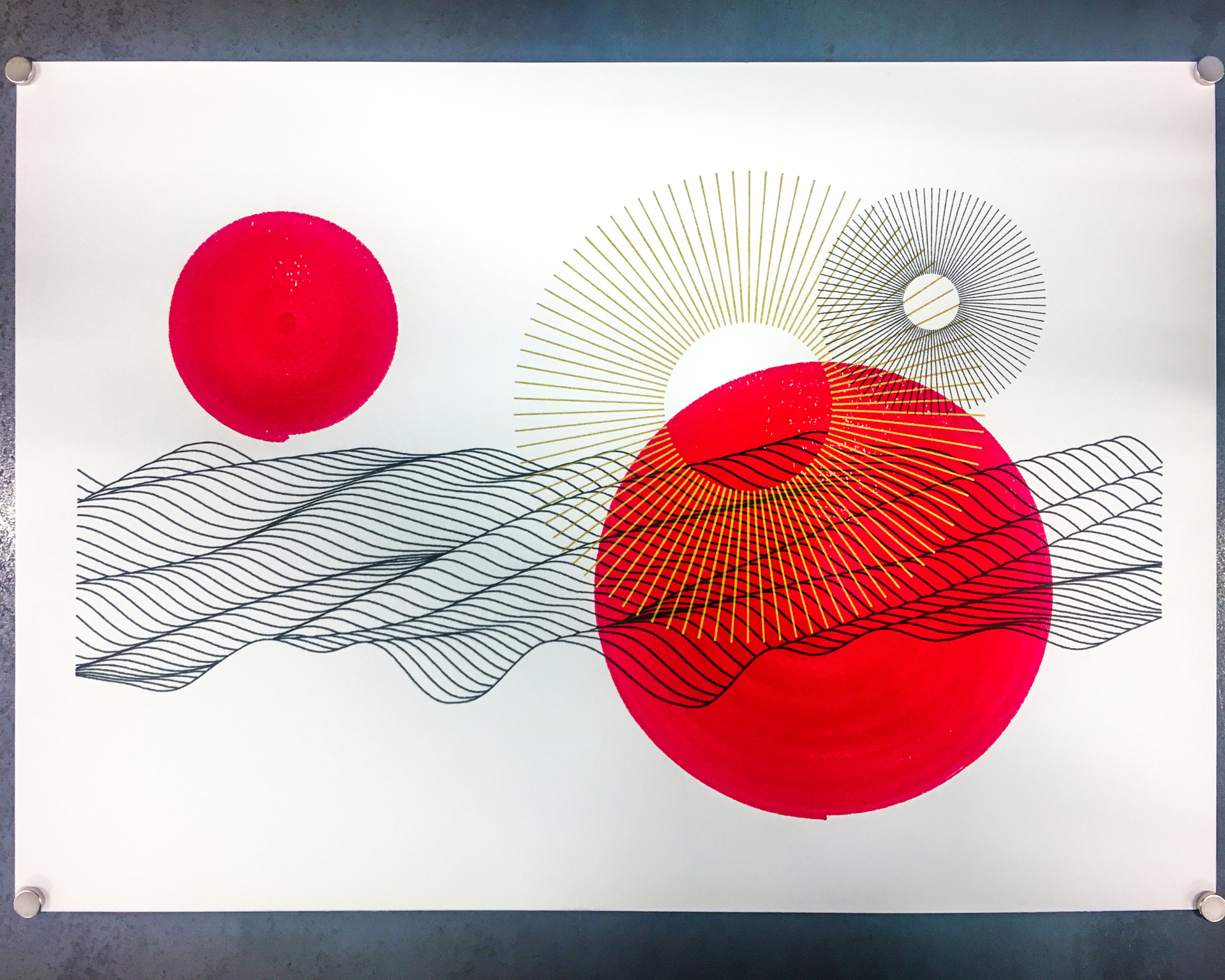 "you can't manage what you can't measure." - Peter Drucker

In the quest to become world-renowned pen plotter artist Daniel Catt, I added a graph to my Instagram tracking tool (see last week: Making all the things), because if you're not developing your skill as an artist, you should at least be developing your metrics or something.

There are three measurements you can use to measure your success as an artist...

...I am of course joking, but also, you know, not really.

I'm already happy, tired but happy, so I've already met the main criteria of being a successful artist, which means I'm just messing around with the other two.

This week I sold an artwork, which means when I get round to updating my balance sheet, I will have lost slightly less money than before, which is nice. 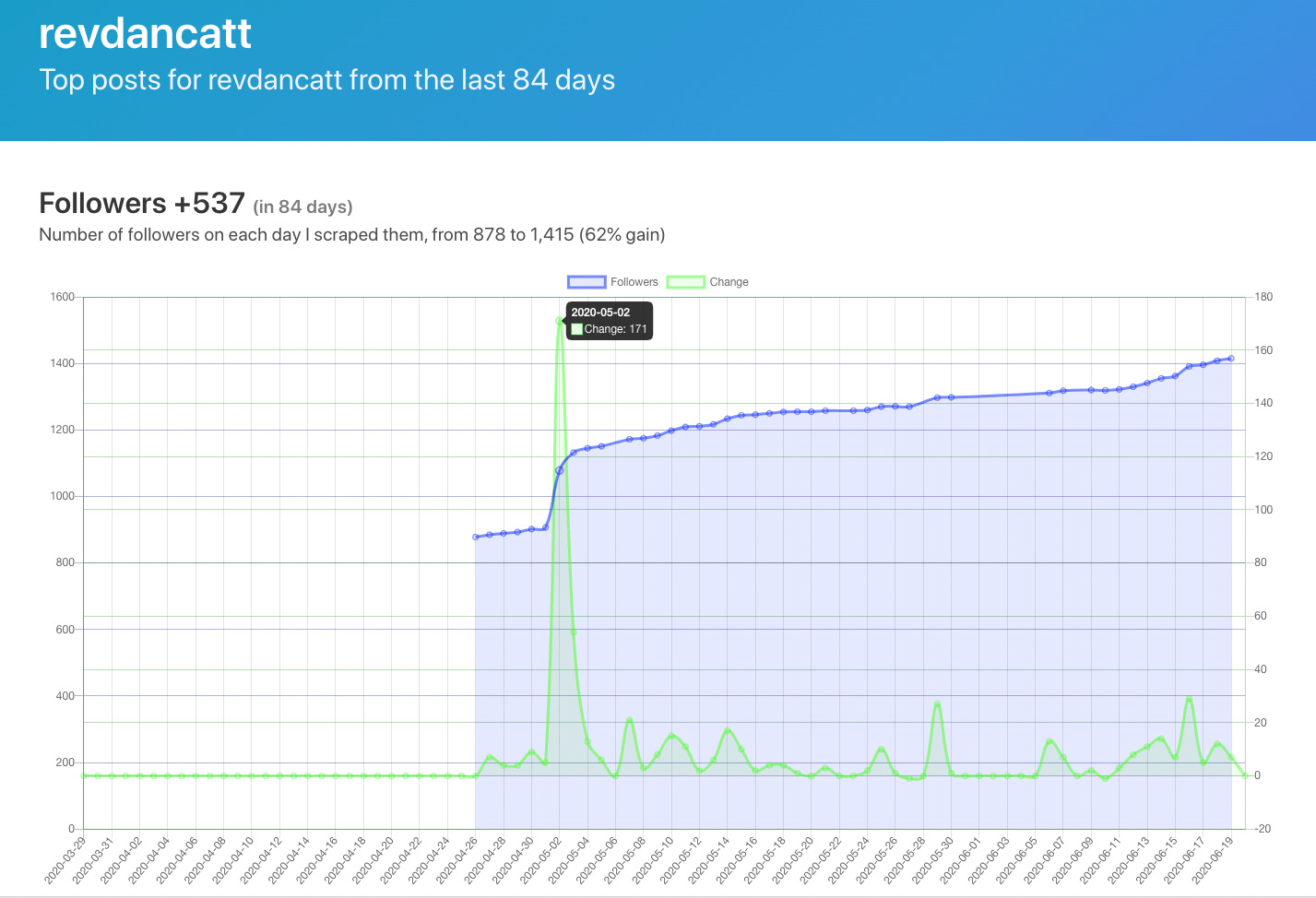 The tool has been running for nearly two months now, and in that time, I've gained 537 followers. I'm doing the things you're supposed to be doing, trying to be consistent with my posts, generating new "content" and so on.

There are things I'm not doing; worrying too much about my #tags, promoting myself elsewhere, "engaging with my audience".

The peak of 171 new followers on the 2nd of May is due to an interview I gave over on Generative Hut published on that day. I was curious, so I looked up another artist Mattia Zucchelli, and sure enough, they got a boost of 113 followers on the same day as their interview. So that's a thing. 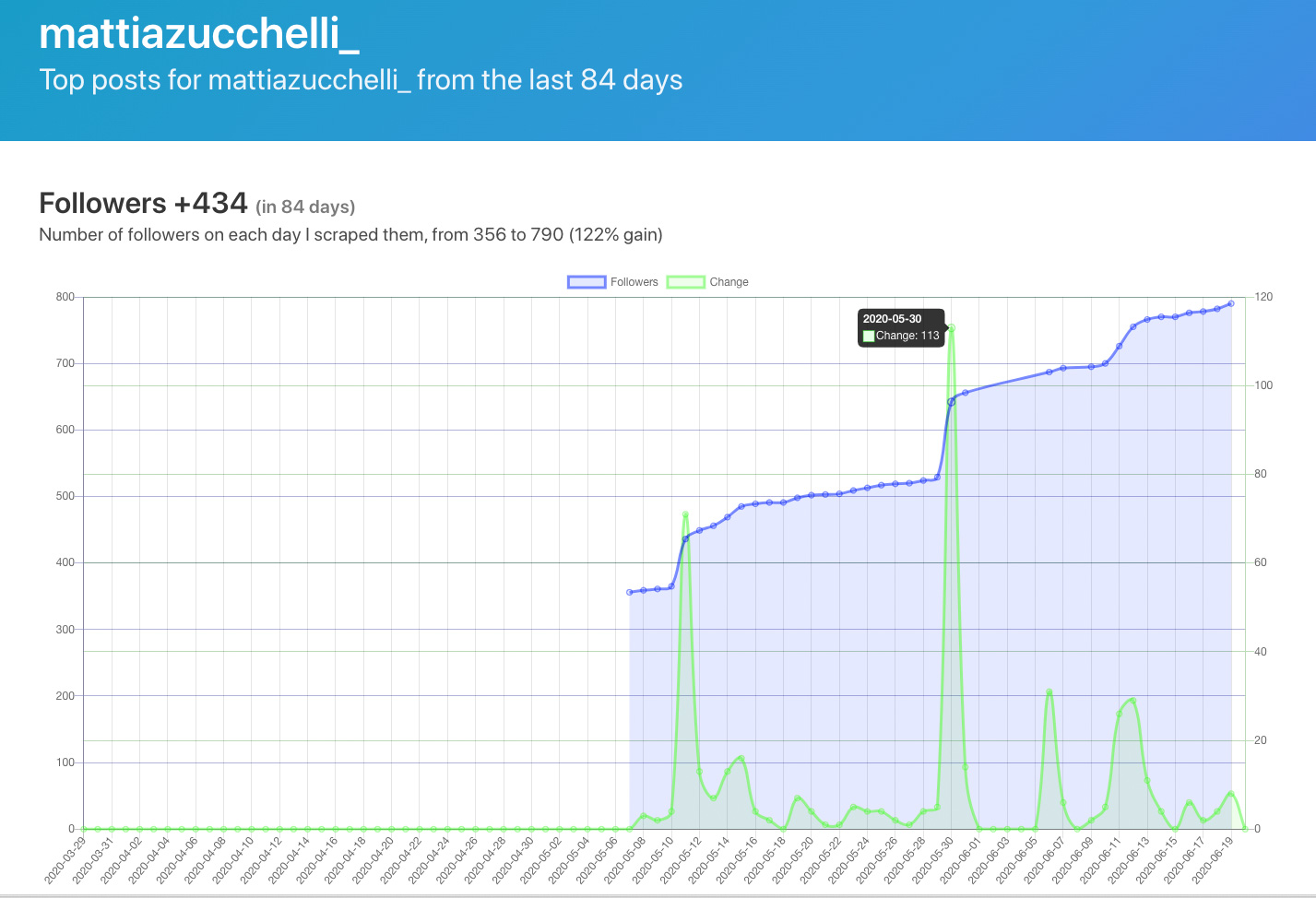 Over the last ten days, I've "promoted" two different posts, one after the other for four days each, at a total cost of £40, for no hugely noticeable effect. Which is fine, as there was no real "call to action" on those posts; I wasn't selling anything, promoting anything, highlighting anything in particular.

The number of likes is about the same as other posts, and the number of followers goes steadily up the same. The only difference I noticed was a few comments from people who would clearly never be buying art in the near future.

For establishing a baseline of what happens, and also seeing how it integrates with the Facebook business dashboard, I guess it had some use.

So I guess that's winning.