It has been a short week this week since last week's weeknotes were late. Does that mean this week's weeknotes will be short and sweet? Hell, no because I ramble a lot, and why say something in one succinct sentence when you can say it in several paragraphs. 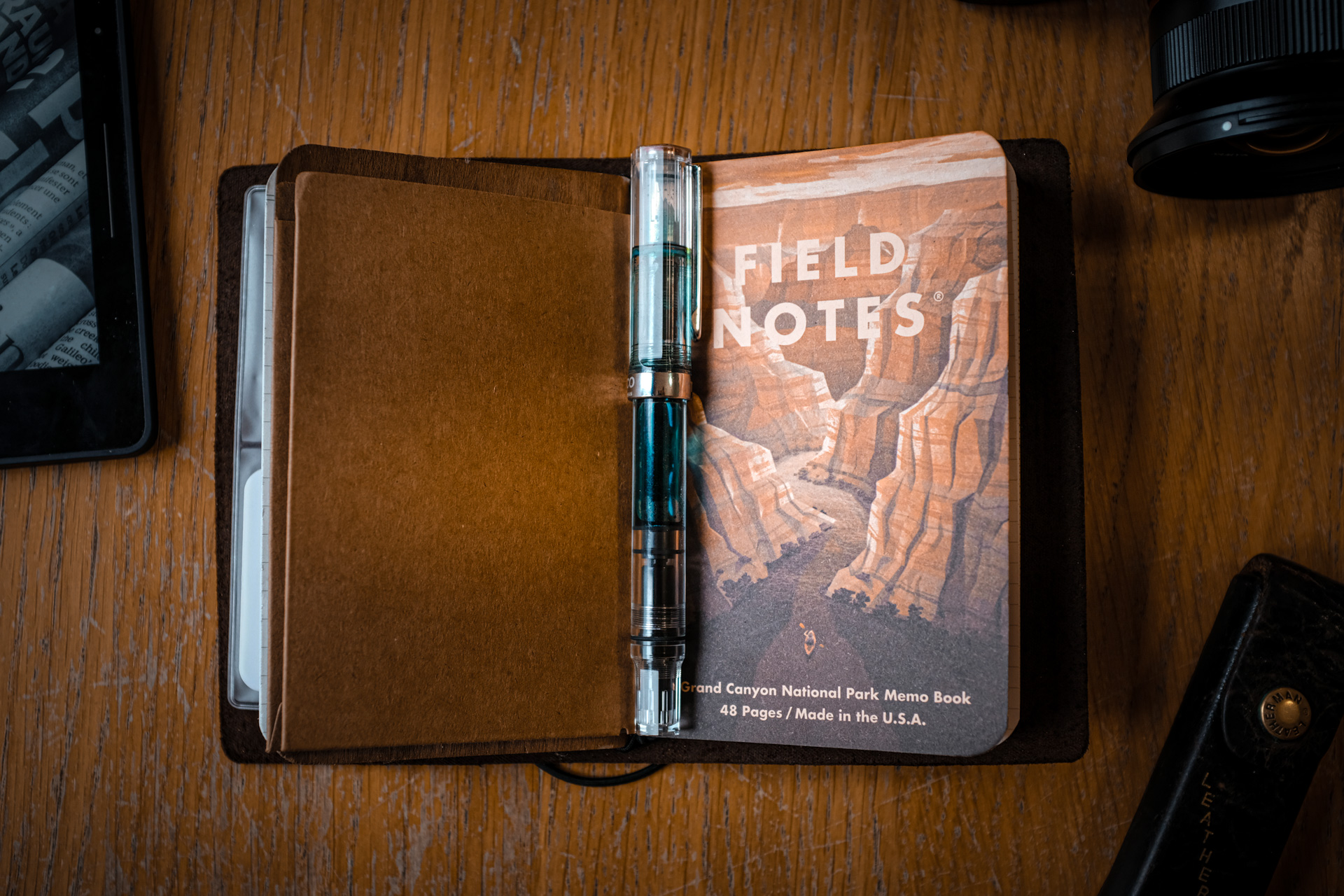 In weeknotes 022, I mentioned buying new jeans, which has had an unexpected knock-on effect. For the past several years I've always worn debranded black Levis 501s, and carried a Field Notes notepad in the pocket, along with initially a Tombow Zoom 707 Ballpoint Pen, but have recently switched to the TWSBI Eco fountain pen.

I know that sounds like a lot of brand-name dropping, but over the past few years, I'm asked relatively often what pens/notebook I'm using and so gotten into the habit of just putting it up-front to save time.

Anyway, I generally hate having stuff in my pockets, but a notebook and slim pen seemed fine, and with the way thoughts fly in and out of my head, all but essential. But then I started needing to carry bank cards, then other cards more often.

I tried fashion the inside front cover of the notebook into a cardholder, which was fine but has started to become a pain that I have to remake it with each new notebook, and I go through notebooks so fast it's stupid.

But it was a sacrifice I was willing to go through not to carry a wallet, for reasons lost to time, and a conviction I stick with stubbornly.

The new jeans are fine, lovely, wonderful in fact, but the notebook and pen just don't sit in the pocket quite right for me. I think it must be from wearing Levis for so long, rather than some design flaw.

Faced with this new dilemma of not being able to keep a notebook in my pocket, but also not being able to hold a single thought in my head for more than 30 seconds, I ended up with a (passport sized) Traveler's Notebook (cover).

And yes, I hate the spelling of it too.

It's a rectangle of leather and some elastic straps that allow you to fasten in a couple of notebooks and a plethora of accessories, fetishised and lifehacked to the same degree as bullet journals.

I now keep two notebooks in, one for work, one for everything else, and little natty cardholders for, well, my cards. It no longer sits in my pocket; instead, I'm getting into the habit of carrying it around with me from room to room. And I guess I've reached Man-Bag age for going out, about which I'm surprisingly ok.

As much as I want this new system to work, I can pretty much already tell that I'm going to end up also carrying around an extra notebook in my jeans pocket and just get used to it.

Well, I'm glad I've updated everyone on my jam-packed never-ending roller coaster ride of having bought a new item of clothing, sheesh, but at least I have pockets right!

What wasn't in my notes because I knew there was no chance I'd forget is this current situation... 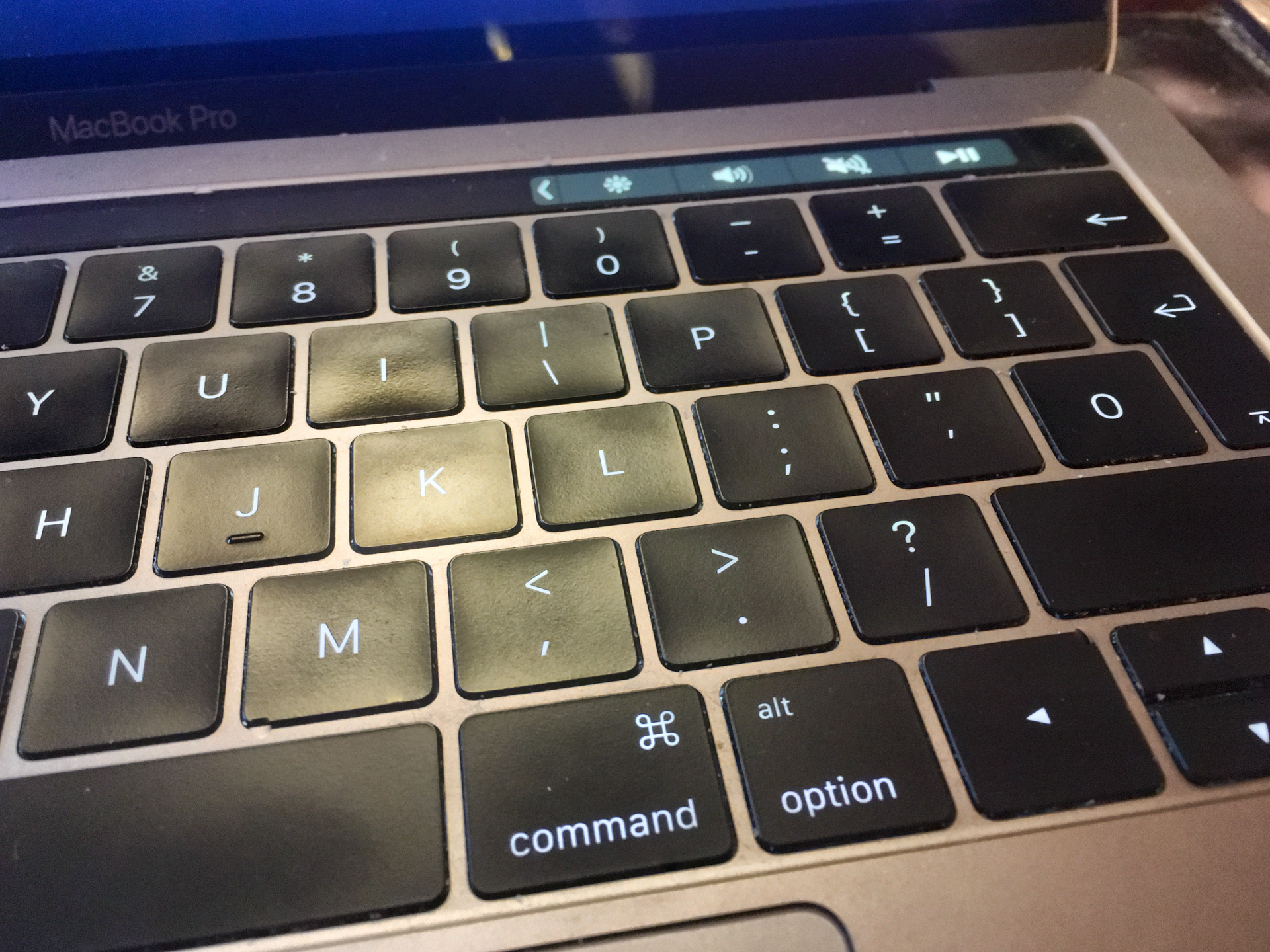 There are three things wrong in that photo.

In my head, my laptop is still new, it's a 13" MacBook Pro, with retina screen. I stopped paying attention to Apple shortly afterwards, so utterly oblivious to any new developments, and I keep forgetting this thing is now about four years old. The Adobe suite hasn't bloated up so far that I've noticed any particular failings or slowing down of the laptop. The only video editing I do on it is for ultra-short videos for Instagram which doesn't tax it at all. It just seems fine, and I even use the magic touch bar sometimes for things other than Nyan cat.

However, two of the keys have started fucking up. The 'O' key and the left Command key, the little clips or something on the back of them have broken. They still work, but only if you hit them at a slightly awkward angle, which isn't too far from how I usually type, but just enough to not register being pressed about 10% of the time.

Which is also not quite often enough to make me do something about it, but just enough to annoy the fuck out of me.

I'm sure somewhere in the Mean of Liff there's a word for that.

After not typing the letter 'o' in my code just enough times for me to want to do something about it finally, and having seen the prices of new Apple laptops (almost enough to make switching back to Windows tempting) I decided the best solution was to yank off a different key and use it instead of the 'o' and swap the left and right command keys over.

I touch type, so it's not a problem until I happen to glance at the keyboard just as I'm about to hit the 'o' key and it throws me off for a second. I'm sure I'll keep track of how I'm doing in future weeknotes.

Well, that and I ordered new key-caps from China which will turn up at some random far distant point and may even be the ones I actually ordered.

3. "BuyWholefoodsOnline" is honestly one of the best company names and always makes me laugh when we buy something from there, online.

Laura Kidd has a new project going on, She Makes War has been wound down and PENFRIEND has taken it's place. I have a soft spot for anything postal related, so analogue music and zines through the post is 💯 my kind of thing.

I think I must have come across Laura's work via Viviane Schwarz, who makes amazing books and things.

I don't really do "Books I've read" or "Music I've listened to" on this blog, but I am enjoying the new track Everything looks normal in the sun, so that's my recommendation for the week.

6. A long time ago, I wrote the content management system for Yamaha Bikes Europe. The system needed to have regular "users" who used the tool to make the webpages, and it required "super users" to manage those users. But it also needed a user to manage the "super users" so jokingly I called them a "super duper user" because nothing could be so ridiculous.

I have a page over here: https://revdancatt.com/penplotter/ that was actually written in proper basic HTML in a text editor, and each time I added a new "tool" I'd have to edit the page. But, I need to start expanding on the whole "pen plotter" section of the website, so it's had to be bought into the fold of being a "proper" dynamically generated page.

It looks no different, but it now both more maintainable and more likely to break than before, so I guess that's good.

I've changed the deploy/build process of the site.

Before, when I deployed a change, the site would stop, the codebase would get rebuilt, then the site would start again. Making there about 30 seconds in which the website would return a 502 status page. And goodness knows how many website visitors to pen plotter art buying conversions I may lose in those valuable internet seconds especially as I don't even sell any yet.

To solve this non-problem, when I deploy the site now builds, then restarts, like any well-built system should do.

Now the site is only down for 6.4 seconds each time I make a change.

According to Grammarly that wot I use to edit this post, this has a readability score of 69, so I'm somewhat unwilling to go and fix anything.

Please feel free not to let me know in the no comments section which remaining 31% is unreadable. 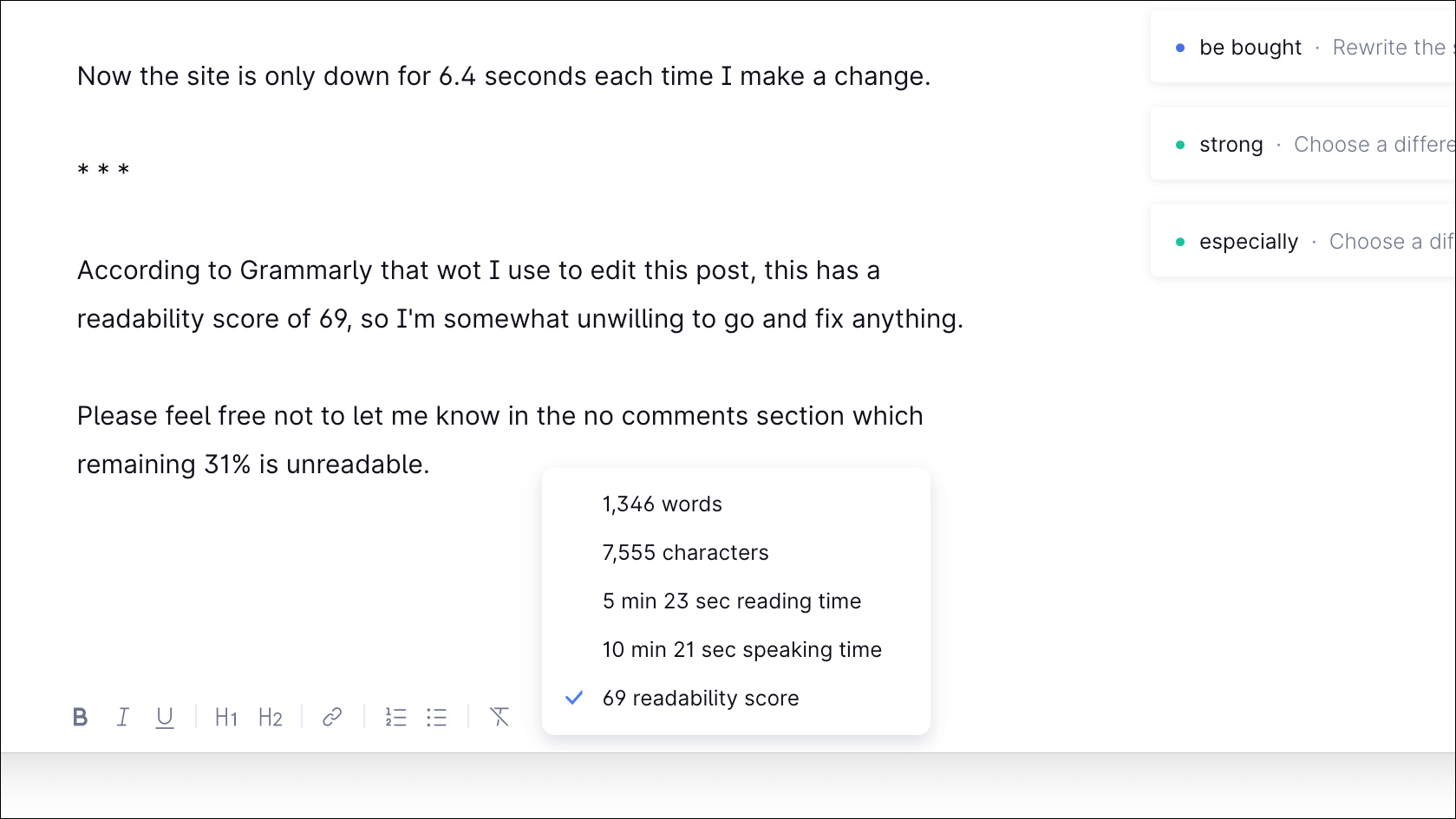 Congratulations if you read this in less than 5 minutes 23 seconds.