Why on earth did I decide weeknotes were a good idea? It's like writing about your week, each week, every week, weekly! I only just wrote last week's, how is it this week already?

Well, they always say start the year how you mean to go on, errr, maybe.

Oh ok then, this week I went out to intentionally take a photo of the sunrise. I thought about writing about that process here in week notes, but decided it needed a whole blog post to itself (as opposed to a journal post, and oh lord why do I have different stupid sections of my website).

And the last couple of days have been spent tidying up my art studio to make it useful again. Part of the whole pretending to be an artist thing last year was getting a space in which I could put equipment and start exploring some ideas/pent up "arty" frustrations, working out if I could do a bit of arting on the side. Or I guess what people call having a hobby.

However, the artist who was supposed to be having an exhibition at the studios here had to pull out, so it was decided that all the studio artists would put something into a show, and also "work out front" a couple of times a week.

At that point, I hadn't actually produced any work beyond just testing things out, but at the same time, I didn't want to miss out on the chance to at least show something.

Which lead to the situation of trying to do my day job (helping museums), going to Hong Kong, producing "arts" to stick on the wall (and sell) and making & sending Christmas/Yule cards.

So up until a couple of hours ago, my studio looked somewhat like this... 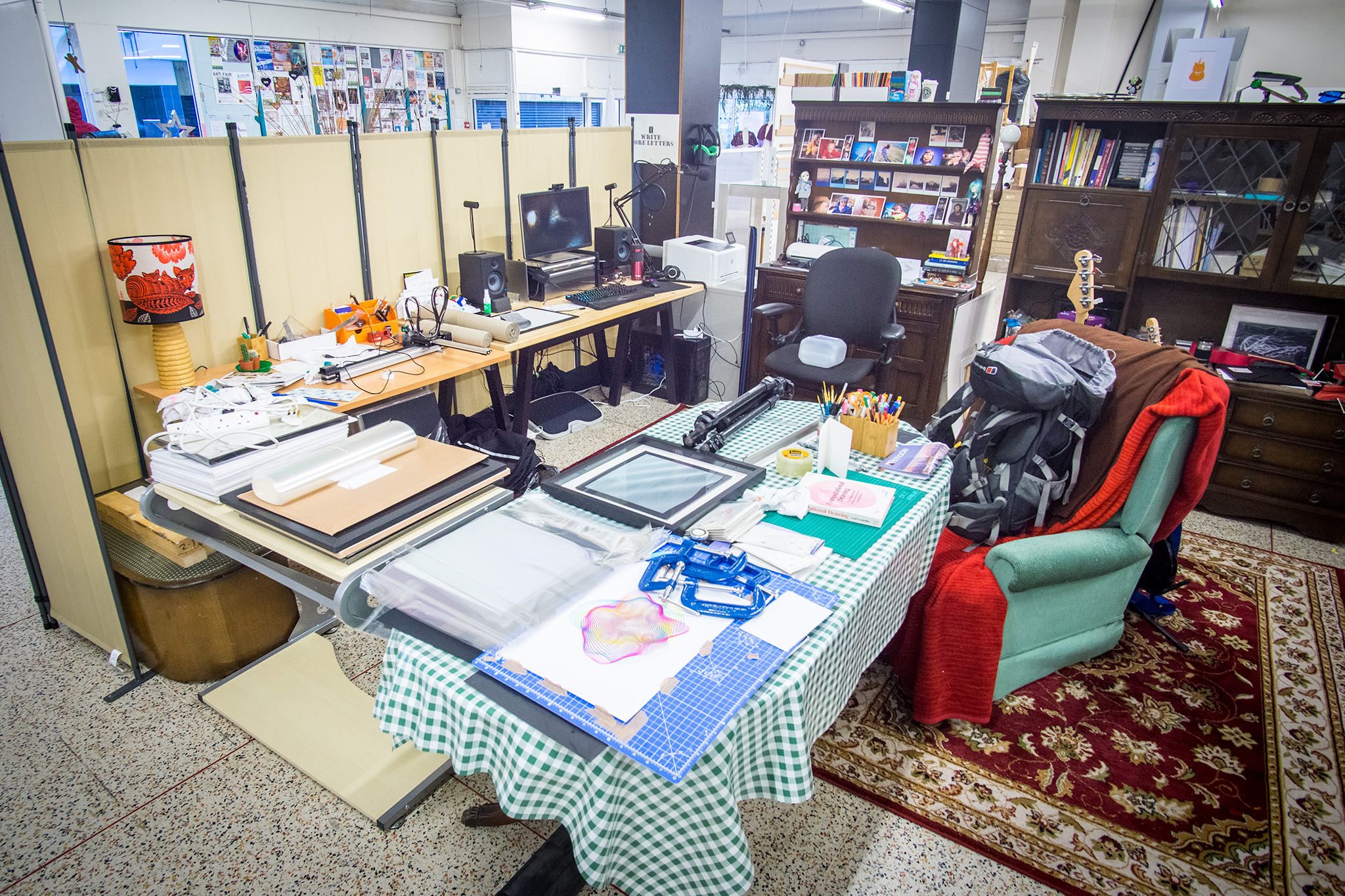 If I were to sum up last year into Year notes, it would be something like this:

2019 was the year that my youngest started secondary school, meaning that all children were now officially able to set off to school and come back home on their own, and so I didn't need to be at home. After 17 years from 1st child being born to last child having their own house key, it seemed as though all the art stuff I put on hold all that time ago could start up again.

I know that sounds kinda melodramatic, but in some respects it's true. When kids are in the picture, it's pretty hard to keep an art/making space where you can, gasp, leave stuff out overnight and still expect it to be there in the morning and not in the way.

Not true for everyone, obviously, I've seen people have kids and still be productive as hell. I have no idea how they do it, either coffee or hiding all the crap bits from Facebook, Twitter & Instagram I assume.

At the start of last year I gave up Facebook, Twitter & Instagram. Which worked pretty well, but recently with the beginning of the "art" I decided I needed to hustle-hustle my personal "I'm an artist" brand a little. That and when you make/sell/promote art, it's kind of expected to have an active presence on at least one of them. I'm finding it a weird balance between not wanting to be full swagger self-confidence "look at me being an amazing artist" self promotion and it having to be precisely that.

Last year also marked 8 years of being self-employed/freelance. Most of it has been brilliant, some of it terrifying, especially the part where I only had £1.37 in the bank, all of it has been wholesome (apart from perhaps the bit with the DIESEL models, with oversized watches and neon lights). Working with journalists and museums, doing good things, setting up Community interest companies (CICs), has all been great. But also pretty full-on.

The first few months of 2020 will be about slowing right back down again and going back to write about some of the art from the last couple of months.