From Plots to Prints, a reMarkable pen plotting story

I've made a print, rather than a plot. I'm a bit excited about it. Sales hustle, you can buy it here, assuming it hasn't sold out (spoiler, it won't have sold out). 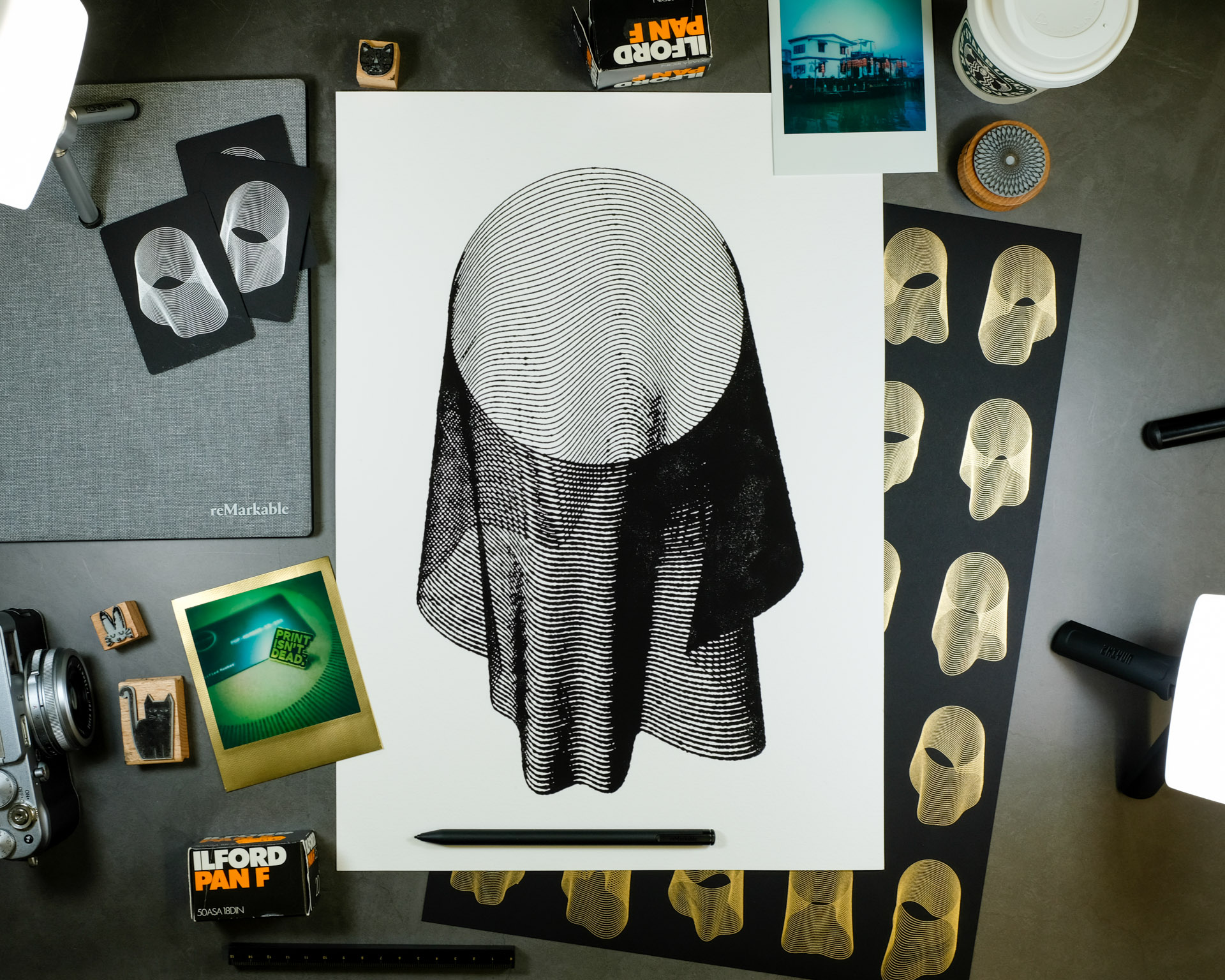 I decided I wanted to write about it because I think it's interesting in two different aspects, which may appeal to different people. The first is the #shoptalk reasons for making prints, and the second is the process used to make it. We'll get the business side of it out of the way now.

I'm a pen plotter artist, and the AxiDraw pen plotter is my tool. I write code that I can manipulate and interact with to generate vector graphics (SVGs) with, the type you create in art packages like Illustrator. I then send those SVGs to the plotter, choosing my pen, ink and paper carefully, and let it draw the plot.

Drawing the plot often takes hours because I run my plots really slowly; it suits my work better, giving a more even line and ink coverage. There is nothing wrong with running plots quickly and having a more organic look to the plot. Many people have told me they like the more uneven look because it moves the plot towards the hand-made, craft, fine-art aesthetic and away from perfect-computer-print.

Sometimes I worry I make my plots too clean and perfect, but it's the path I've chosen so here we are 🙃

I've talked about this before in my monthly profit/loss posts (which can be found over here, just below the list of tools), that selling plots isn't scalable. I mix my time between creating plots to go into the shop and trying out new code, ink, paper and techniques; let's generously say I produced one sellable plot each work-day, twenty a month, and managed to sell every single one. After expenses, I'd make around £50 profit per plot, that's £1,000 per month.

Pretend for a moment that I'm super successful, buy an extra plotter and double my output and still sell out, I'd be up to £2k a month, which would be amazing, but not enough to give up my day job.

I have three choices...

1) Reduce my living costs until £2k is enough. Three kids, one about to go to Uni and a mortgage suggests that's not going to happen any time soon.

2) Become a famous and in-demand fine-art artist and increase my prices, to like £1k apiece and sell 5-6 a month. Which is a fine option, but I have a target audience in mind; people who want unique, one-off, original art, but can't afford to buy traditional originals. I'm pitched somewhere between people who want to pay more than a print, but less than the thousands for original art, but still get something unique and original.

3) Keep working the day job (btw, hire me) to cover the bills, but let the artwork cover its costs and pay for itself — more than a hobby, but less than a career, somewhere in the side-hustle zone.

With the right partner (The Print Space) handling the printing and postage it's a close to hands-off print-on-demand as I can get.

The questions for me was how could I make prints that still worked with my self-defined role as a pen plotter artist?

The tools I create generate SVG files, perfect, smooth, clean lines. If I want a line to go one way, it goes that way, and if I want it to switch back in the other direction, it does that too.

There is nothing wrong with that, I would be in the realm of Generative Art, along with several wonderful artists, who often make beautiful art that you can buy as prints.

But I like taking things into the realm of the physical, the faults that creep in as friction plays a hand, the unpredictability of ink, all of that.

At this point, I could take it into Illustrator, run a filter to jiggle and wiggle the lines a bit to give my clean lines some of the characters, which would also be fine, but again not what I'm looking for. So while I've been thinking about prints for a long while, I hadn't found a solution until...

I got my hands on the reMarkable 2, eInk tablet, which you can draw on with a stylus. The first few experiments I tried, using the pen plotter to draw on the tablet produced some interesting effects. 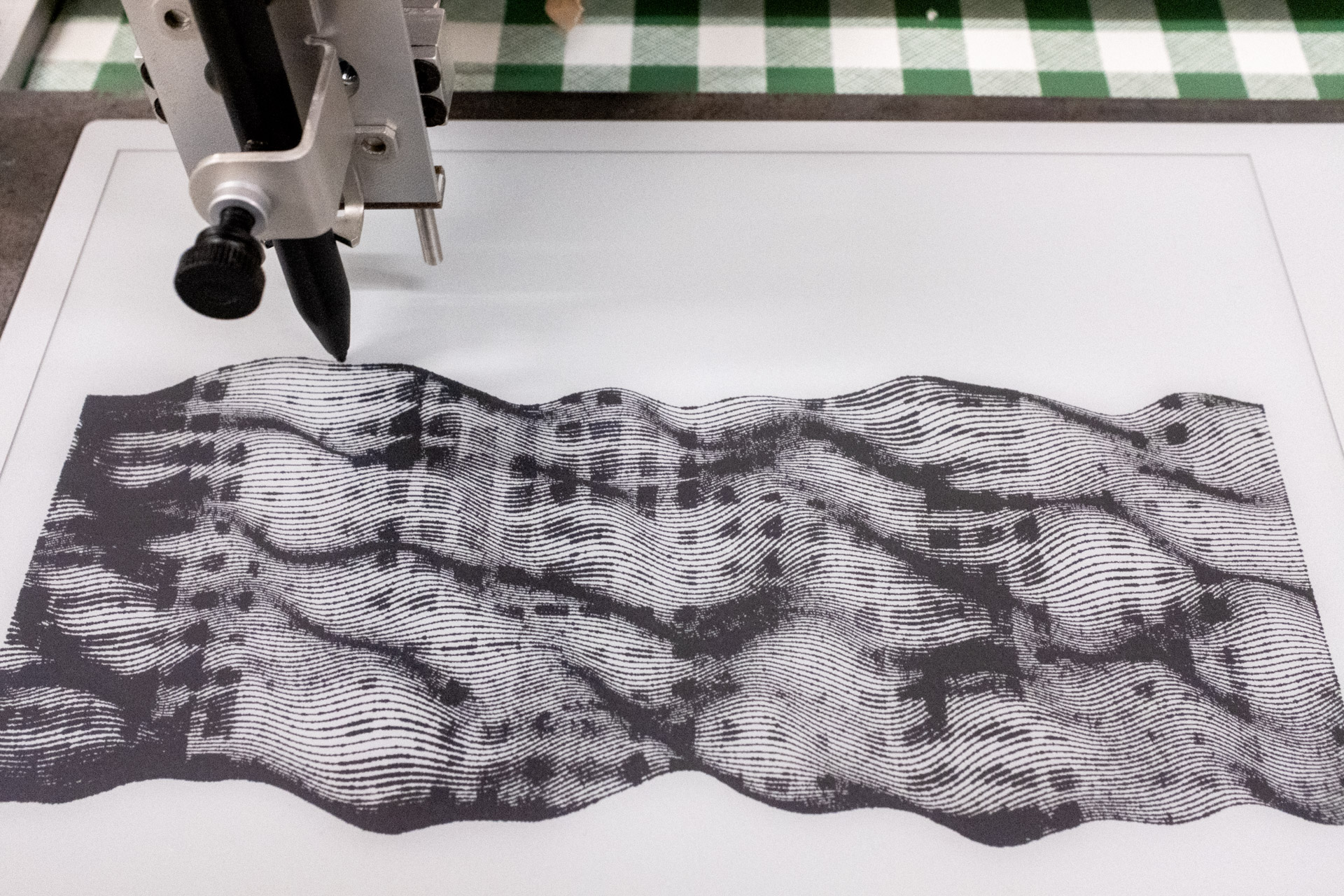 A few things are going on here.

The first is the actual physical nature of the plotter and tablet. The plotter, with its servos, is moving the stylus over the surface. The stylus has friction on the slightly rough paper-like surface of the tablet. A perfect line isn't perfect, the servos with their frequency move the stylus, the stylus grips and jumps minutely on the surface. Lines that are supposed to be evenly spaced aren't always. 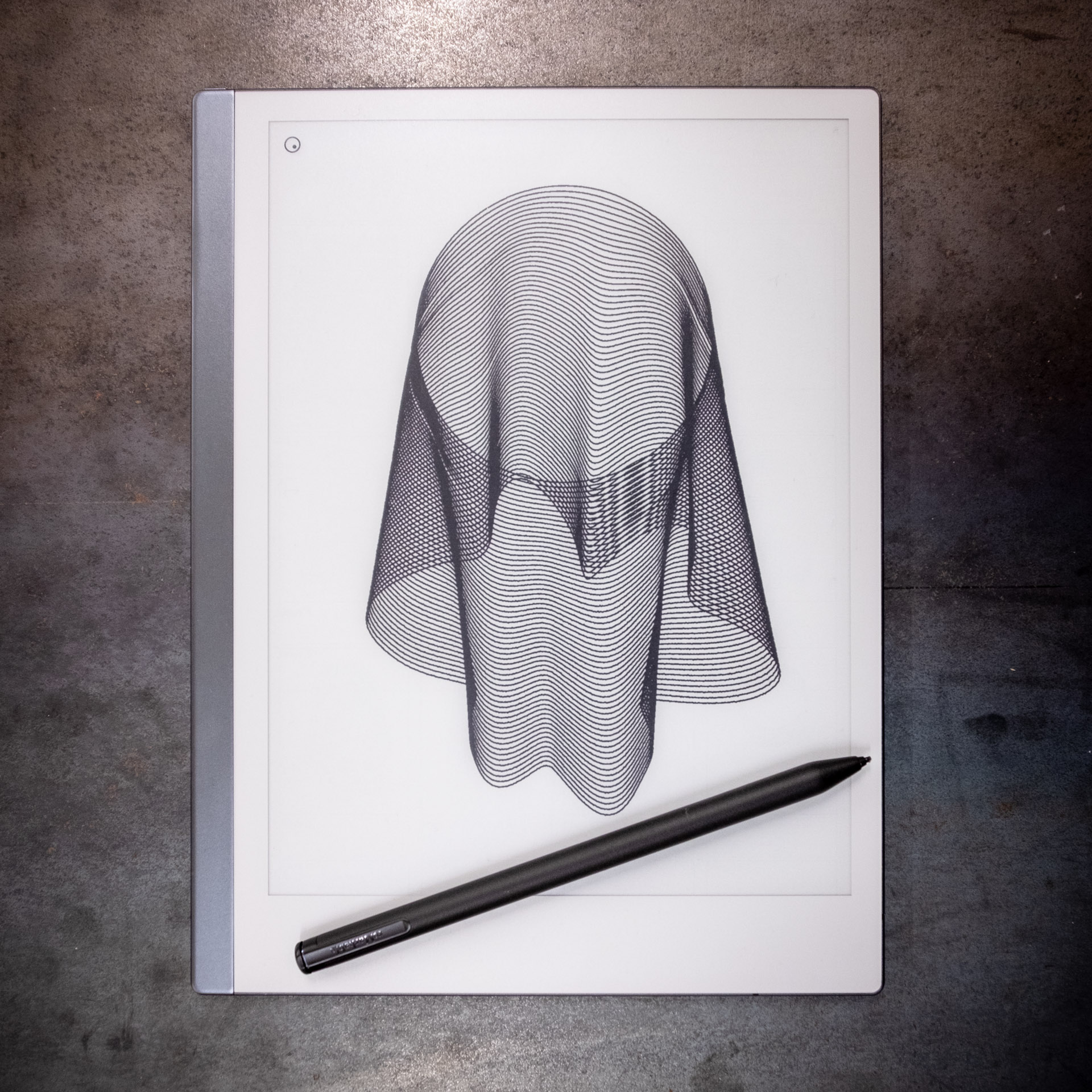 The next is that the software inside the tablet is trying to simulate ink flow. For this print, I'm using the calligraphy pen, which is thicker in one direction than the other. Instead of having real ink interacting with whichever paper I've chosen, we have an algorithm deciding how the ink flow should look.

Finally, there's the hardware aspect. As we can see in the above-above photo the "ink" is clustered into evenly spaced squares, which is due to how the tablet has been constructed and that the plotter isn't putting any extra downwards force onto the stylus.

In the end, I added extra weight to simulate holding the pen, but the artefacts of the hardware are still there to a degree.

So we have a combination of plotter hardware, tablet hardware, natural pen/surface interaction and software simulation all combined to give a digital version of an analogue pen plot.

Which was enough for me to decided this would be an excellent route to take for prints of plots. For the plots to still be created with my pen-plotting artist hat on, rather than illustrator or print designer hat on, but in a way that allowed me to use the resulting digital output. 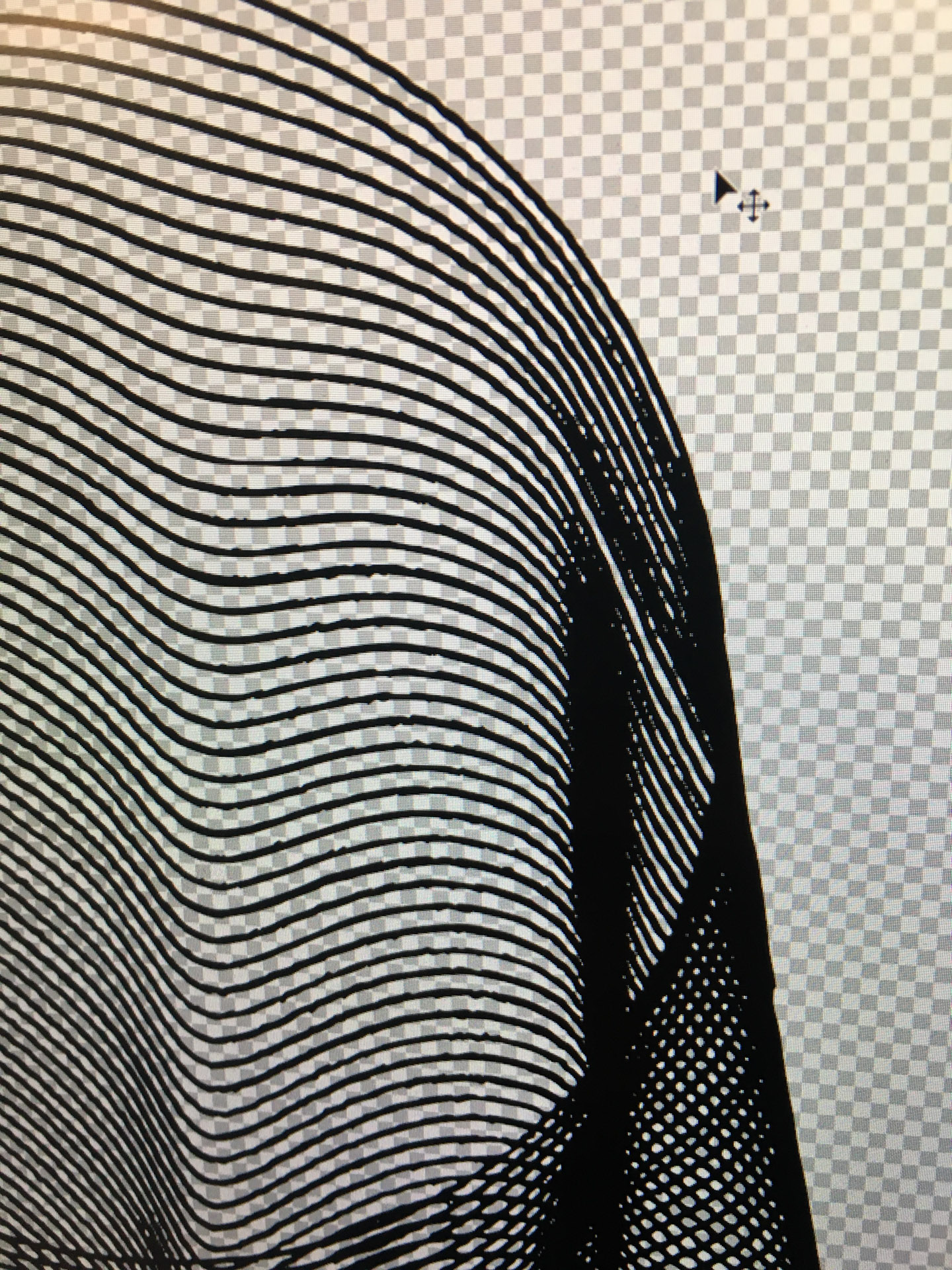 I often buy screen prints, lino/woodblock prints, riso prints and more from artists I come across on Instagram. I absolutly love the way the ink lays on the paper, and I'm a sucker for deep blacks and cyan/yellow/magenta prints.

I wanted the print I produced to capture some of that, so two things are part of the process; the printer and the final design.

I've made prints in the past for various reasons, and I always return to The Print Space. Their C-Type photo printing is fantastic, and the Giclée process for art prints is second to none. The blackness of their blank ink on Hahnemühle German Etching paper is stunning; colours are bold and strong, just holding it and absorbing the print's quality is an experience.

One problem with The Print Space though is despite what I said above about running my plots slowly to improve the quality; their printing process is almost too perfect. If I tell it to print a solid slab of black, that's exactly what I'll get. But because I love screen/wood/lino/riso prints so much I wanted to capture some of that.

So I use True Grit Texture Supply's Atomica Photoshop actions over the image, Atomica (and I quote here) "effortlessly reproduces the analogue imperfections of mid-century printing". Now The Print Space can perfectly print an imperfect print, that absolutly captures everything I love about print. 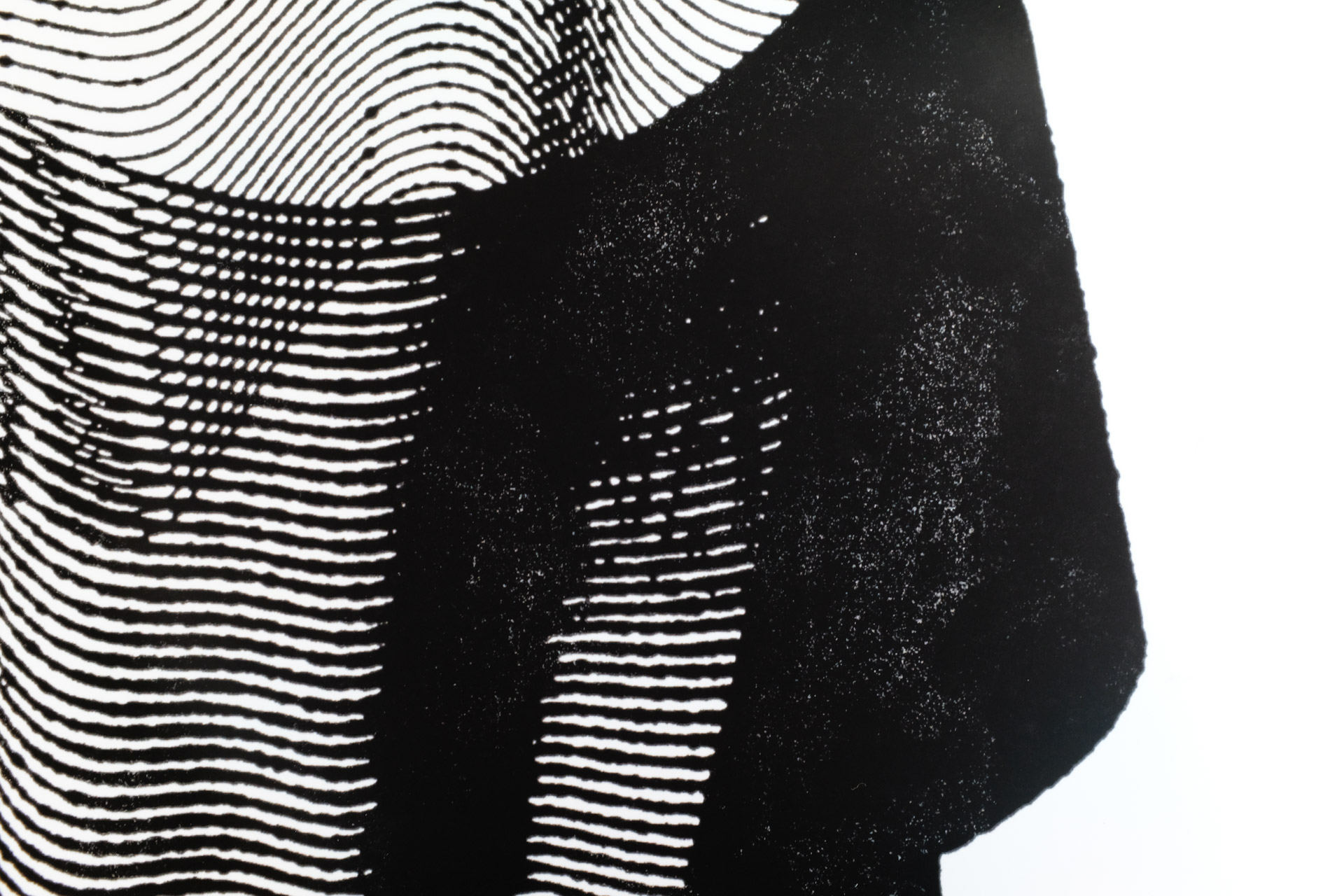 I also love their Debaser and Distress Press actions, but neither is the effect I want for the pen plots. Slight ink bleed and realistic ink coverage is Atomica all over and precisely what I was looking for. 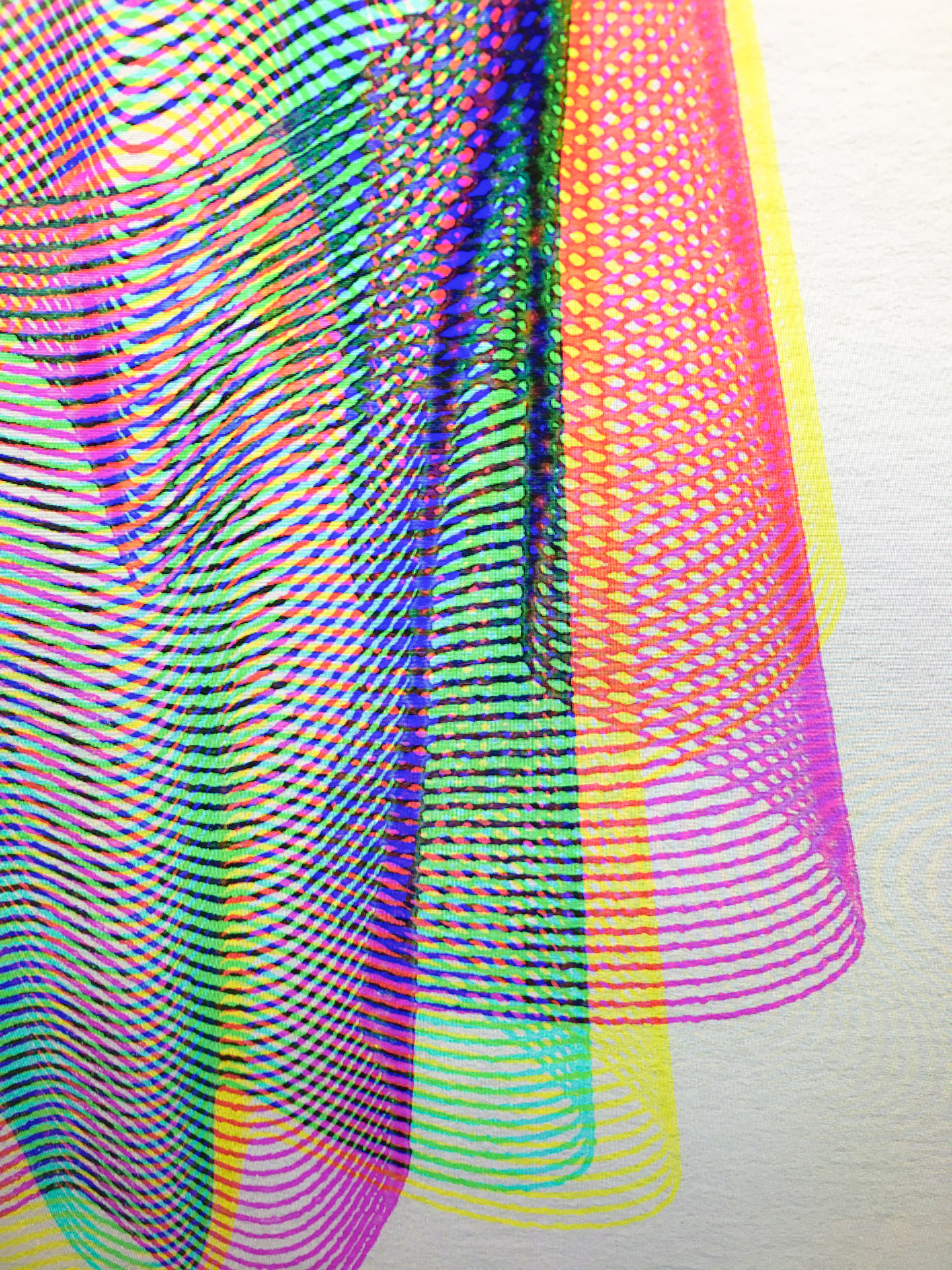 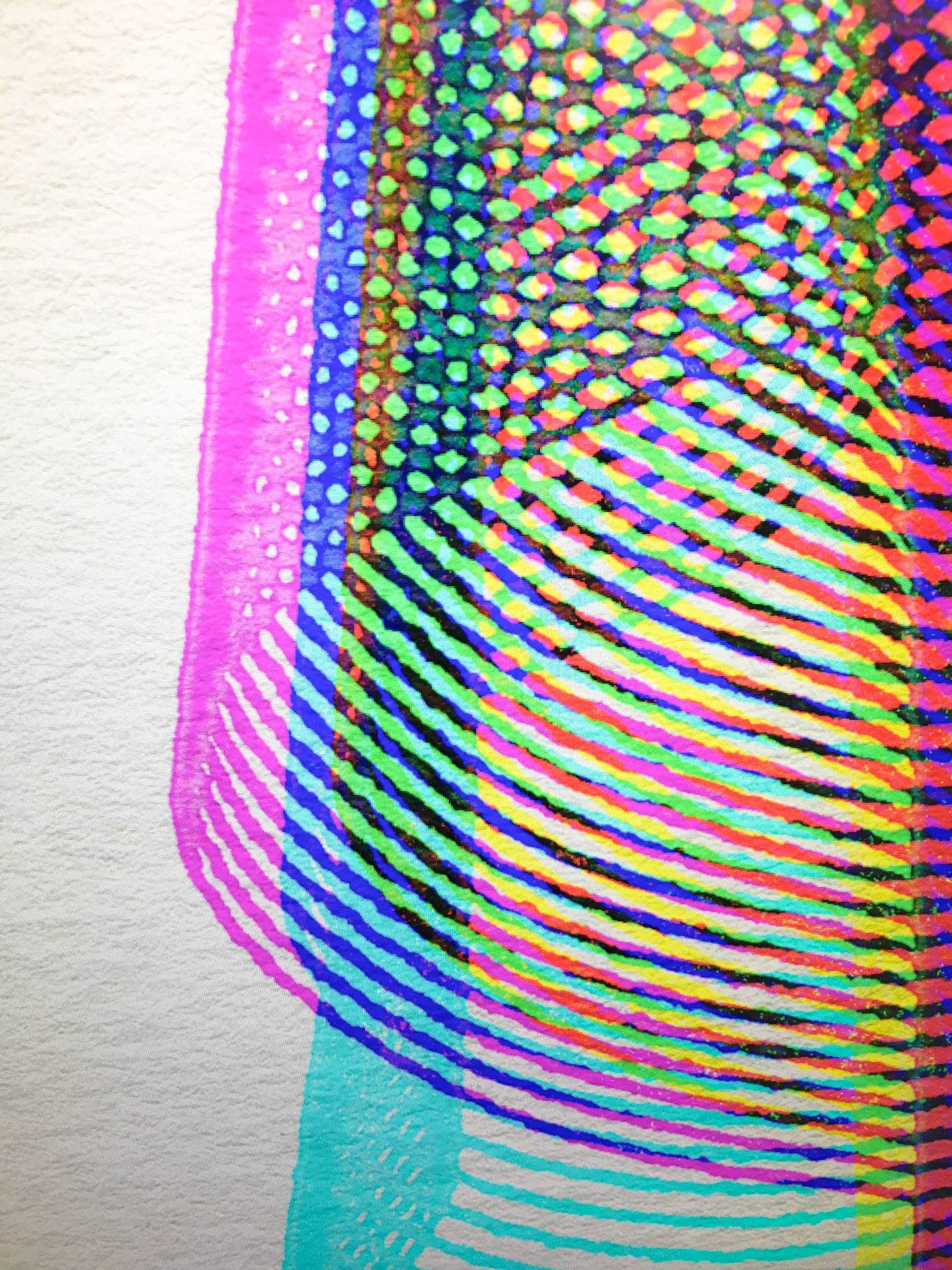 Now, thanks to using a real pen plotter, an eInk tablet that simulates ink flow, and a bit of design to affect the inky printing process I love, precisely printed by a top-end professional printer I'm finally ready to sell prints.

At my current, updated, prices an A3 pen plot sells for around £75-£95. This "Black Ghost" plot would be a limited edition "random/unique" plot, therefor £95, with a profit of around £45-£50 depending on my expenses for the month.

I've pegged my print price at 50% of the plot print, plus printing costs (£95 / 2 + £11). Meaning someone can get a piece of my art at 1/3 off the price if they're fine getting a limited edition print, rather than an actual original.

An open edition print (i.e. not limited) would sell for £49 with the same overheads, and so £37 profit, but of course those can be sold over and over and over again. Now all I need is just over 27,000 people to buy one, and I'll be a millionaire!

(All "profits" are pre-tax obviously, so you can knock another 20% or so off them)

Of course, I'm running a limited edition here as a test to see how it all goes down. The ultimate aim is to keep creating plots for fun, some others to put into the shop, and then have prints-on-demand that live in the shop all the time, so there's always something that people can buy, without me constantly having to, you know, be running Trevor the pen plotter 24 hours night and day. 😁