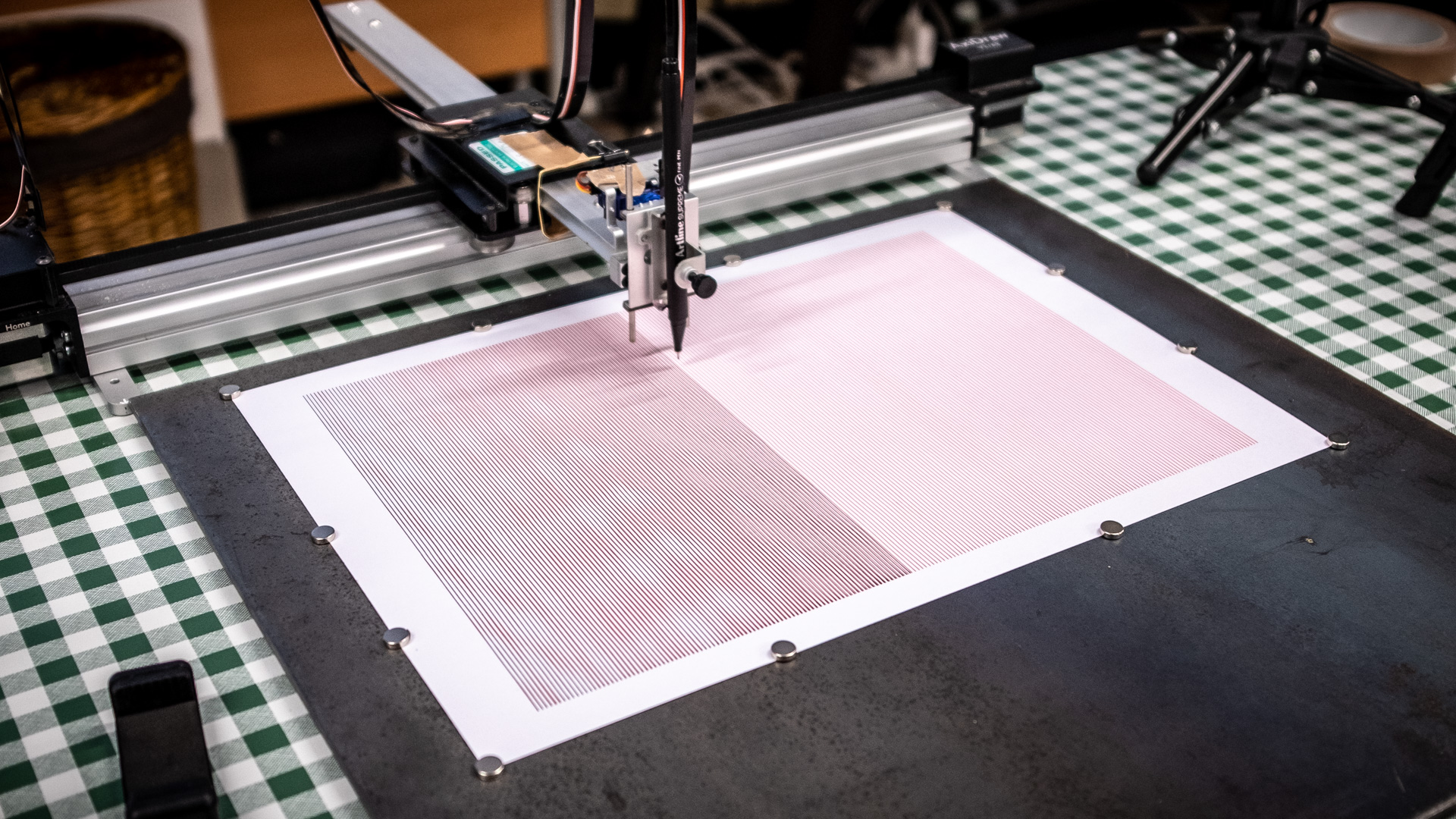 Tool 002 is simply an SVG line generation tool: https://revdancatt.com/penplotter/002-Line-Test/, which I use to test how flat the surface I have the pen plotter resting on is.

I also use it to test that the pen plotter actually draws straight lines. As you can see here, my plotter has a "kink" a couple of inches in from one side, which is annoying. 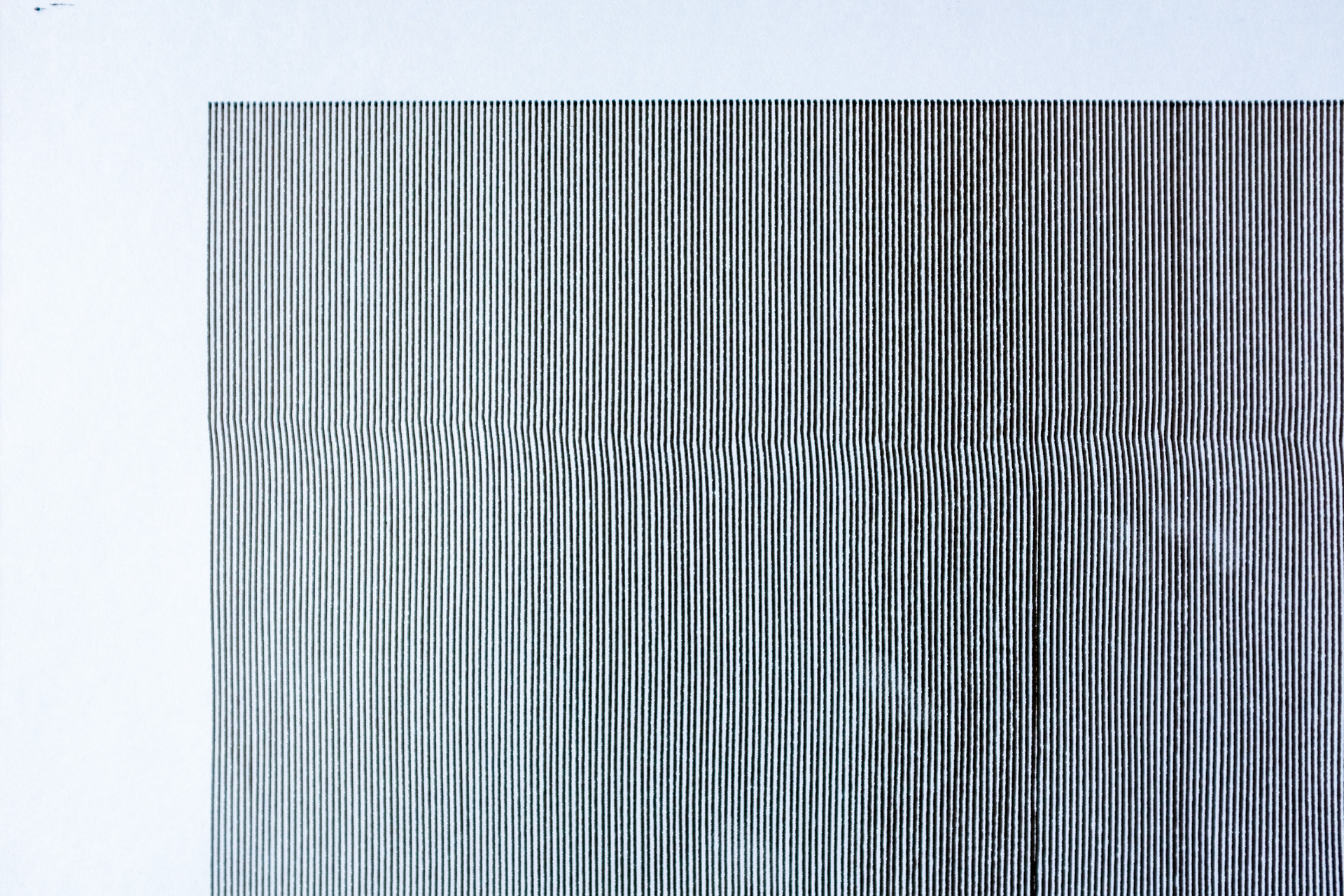 Which I have "fixed" using a paper clips, a couple of other clips and some tape. 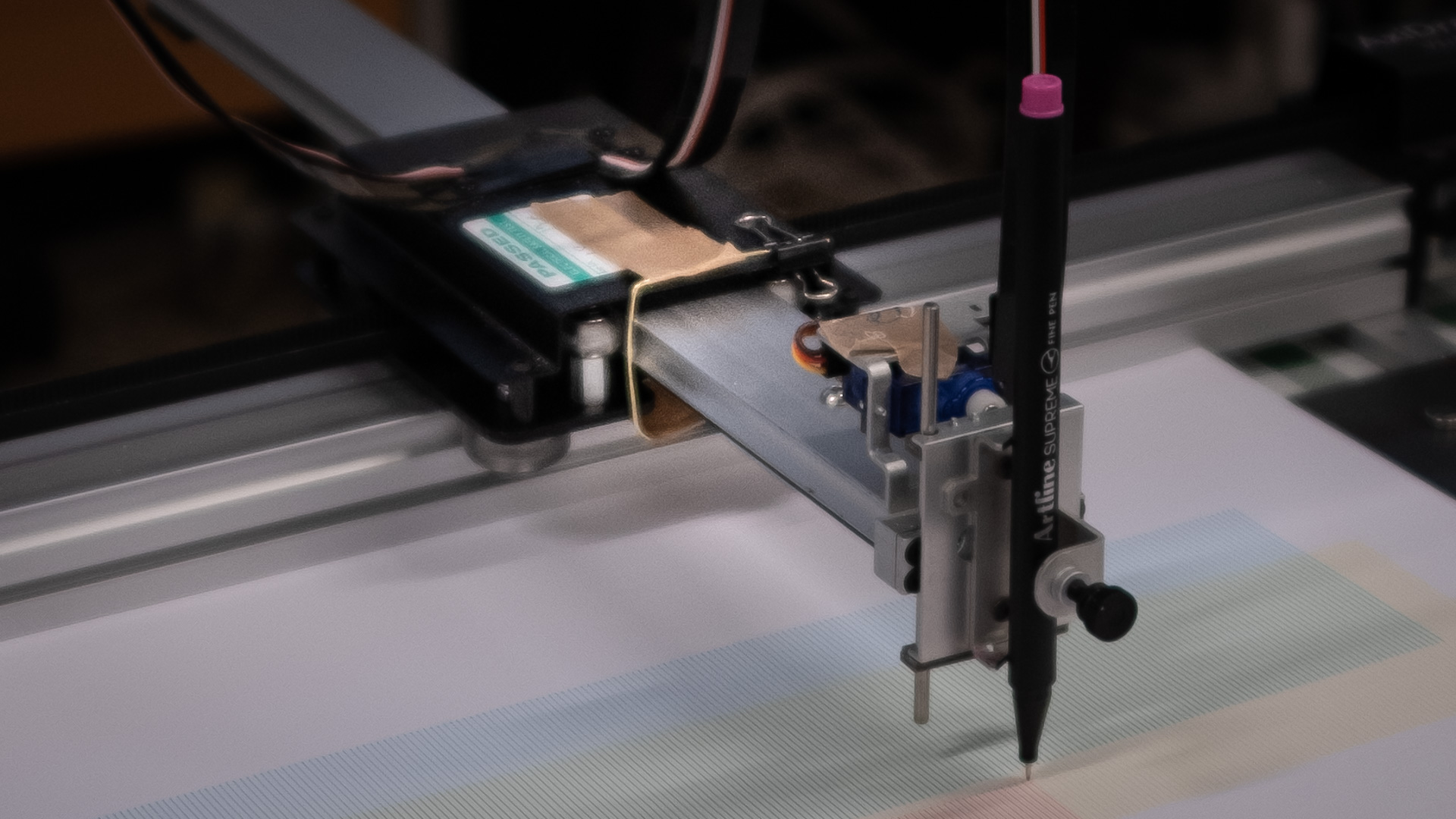 One thing that can be said for pen plotters, the AxiDraw in particularly is that they are straightforward to "fix", adjust, replace parts on and otherwise customise.

Although this is one of the simplest plots you can have, just a bunch of straight lines, it is an excellent introduction to various ways you can manipulate plots to get different results.

All the following plots are done with just straight lines.

Adjusting the height of the paper.

In the plots shown below, I used the same line SVG (around 160 lines) for each one, but I placed different objects under them. The first three I used a single piece of string, and in the final one, I put a couple of coins under the paper.

Then a brush pen was used, where the paper was raised the brush put down more ink. The effect can be quite beautiful, and it's nothing more that straight lines. 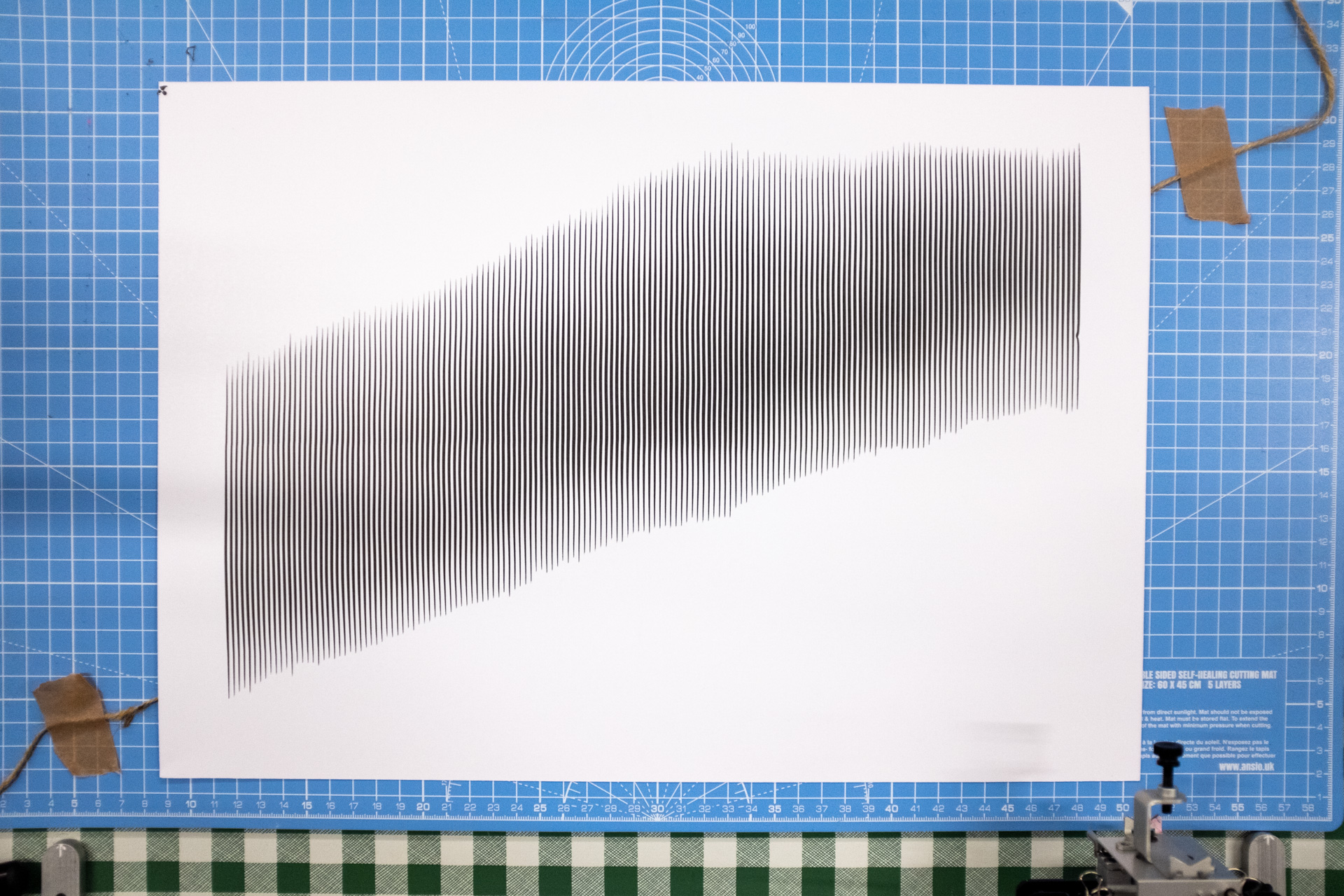 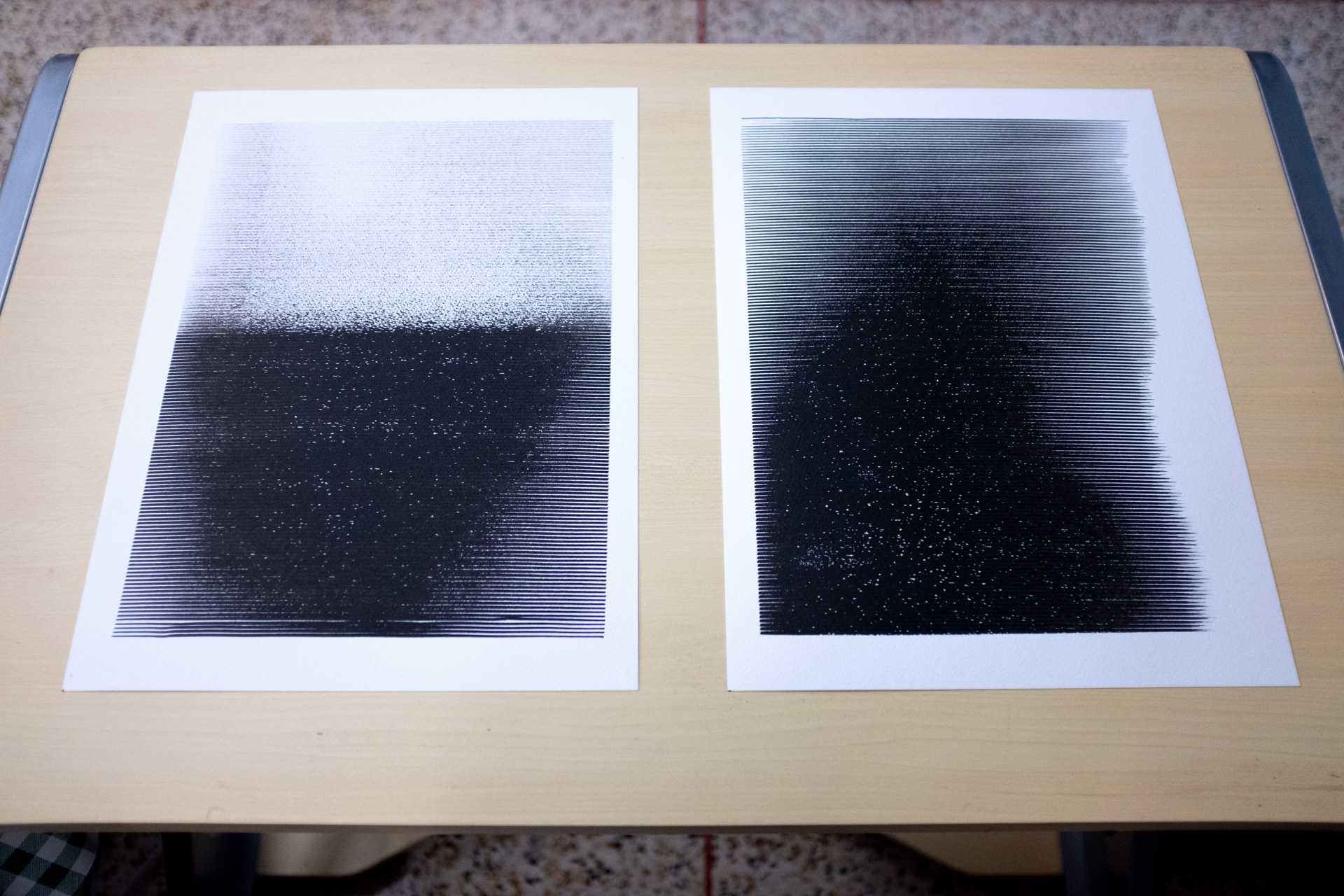 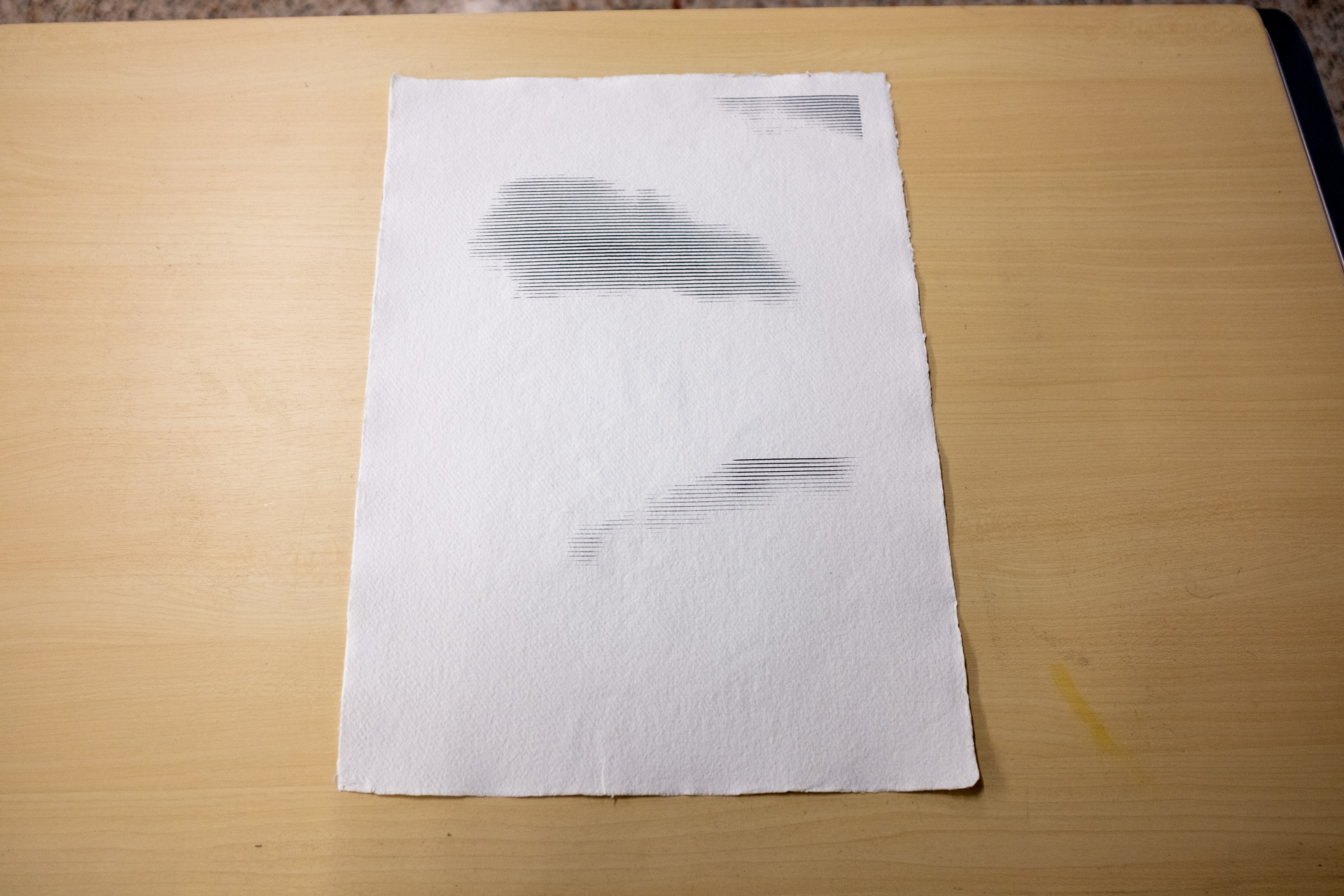 There's not much you can adjust with straight lines, but one of those things is the number of them.

Here I've plotted 200 lines in red and then set it away with a second plot of 199 black lines. Which means to start with, the black will go over the top of the red, then slowly going out of phase to be in between the red lines, then returning to being in phase. 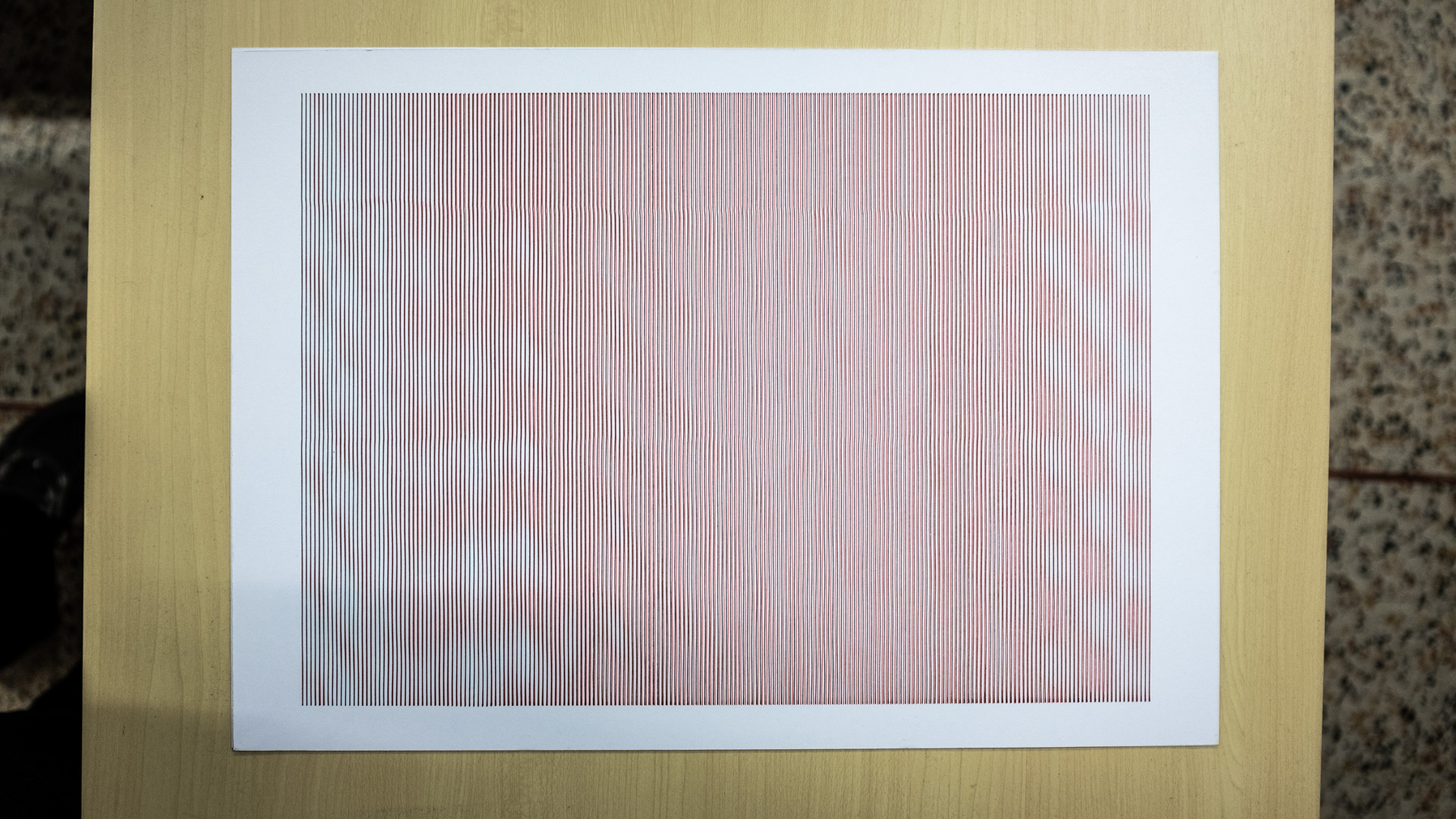 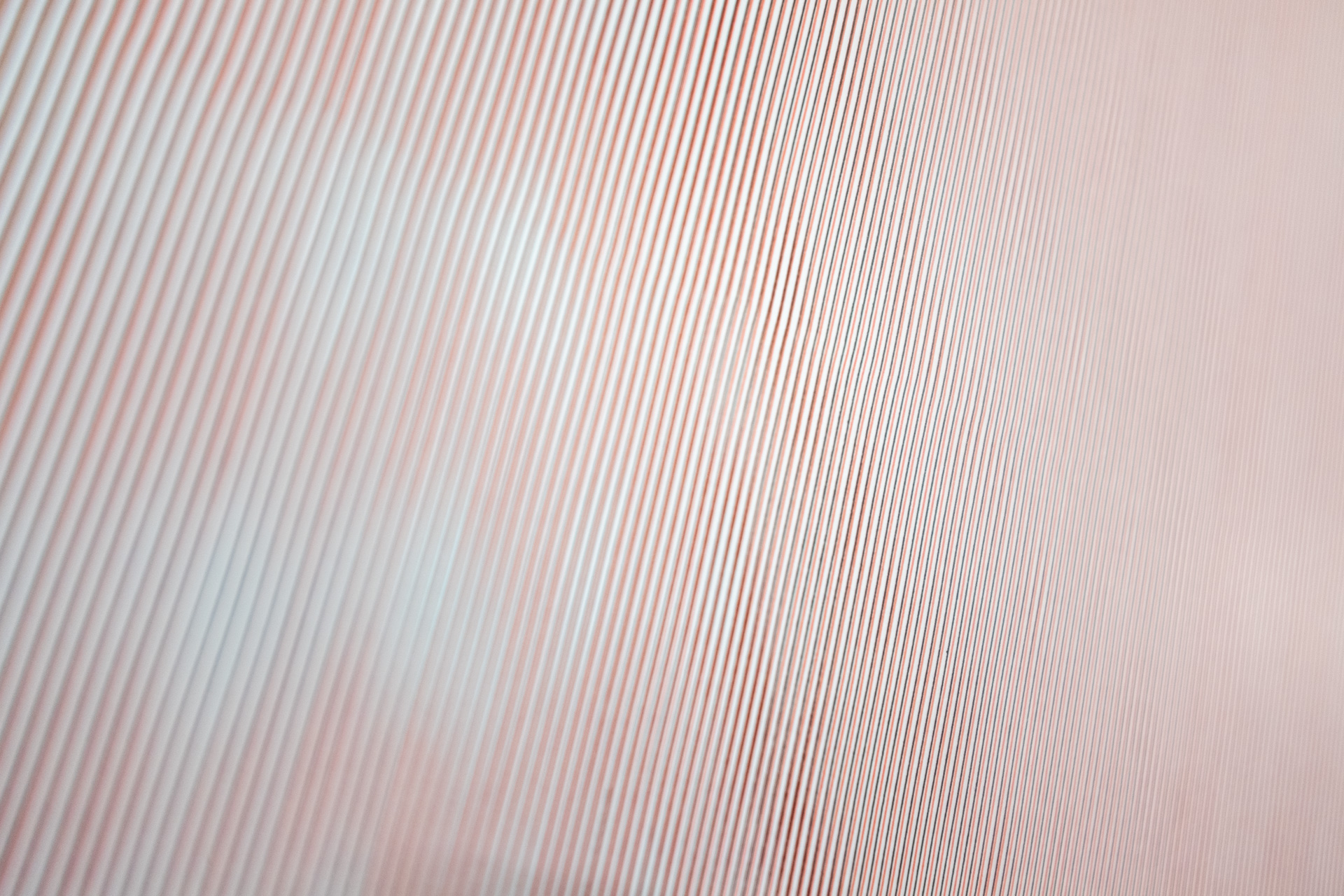 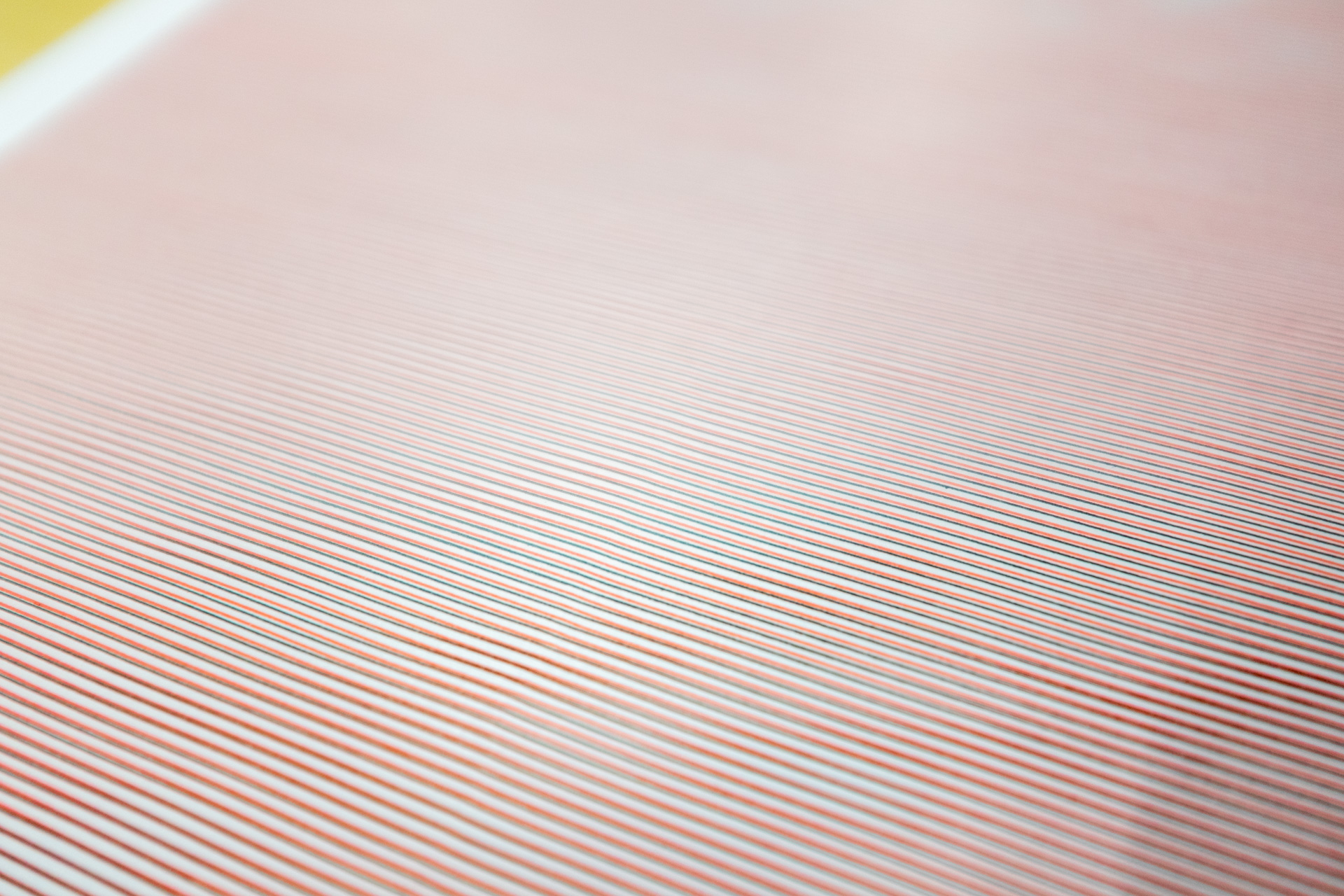 Another thing you can do with simple plots is to repeat them in different colours and positions. Works particularly well with circles, just fine with lines too, reminds me of risograph printing. 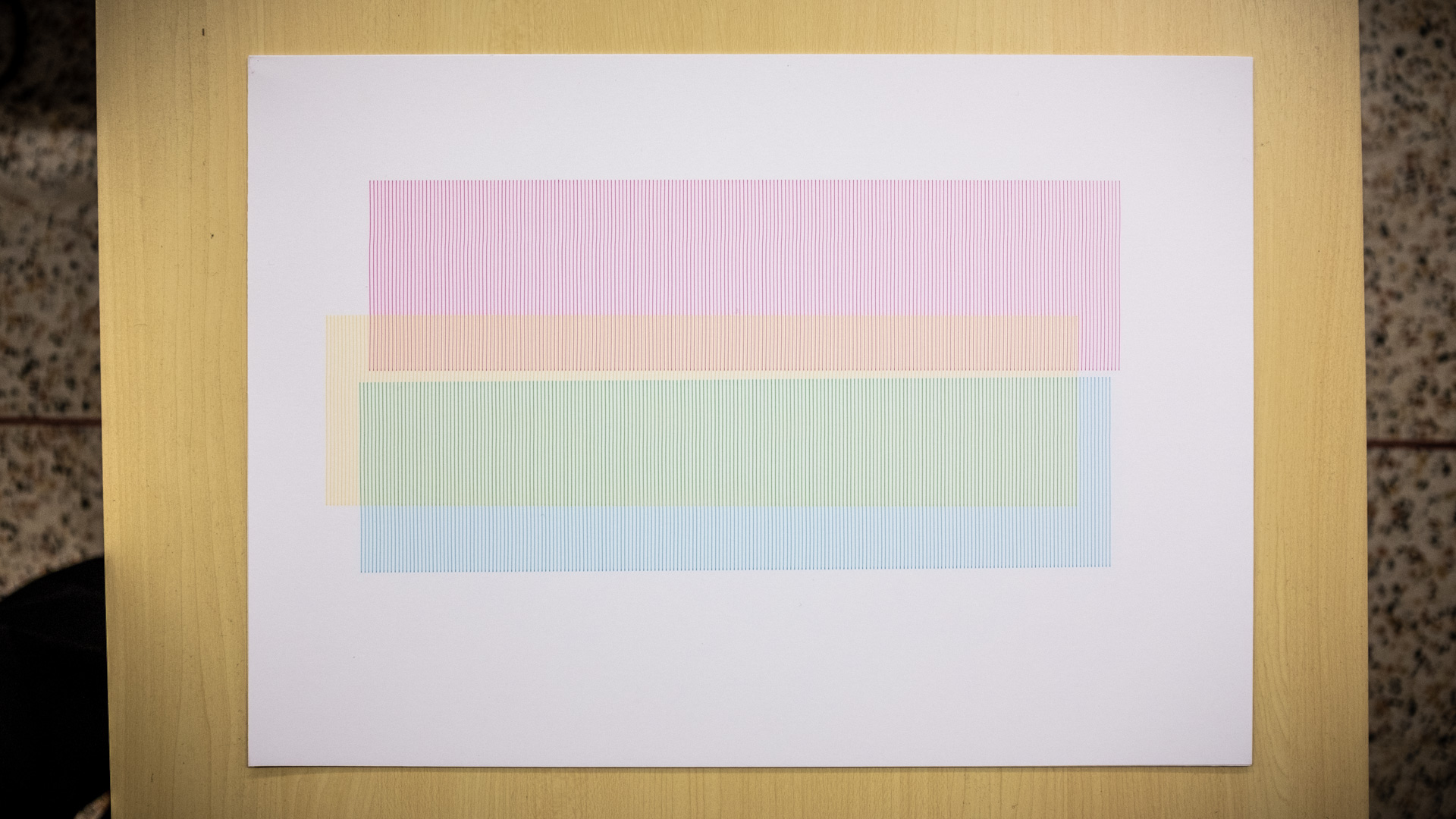 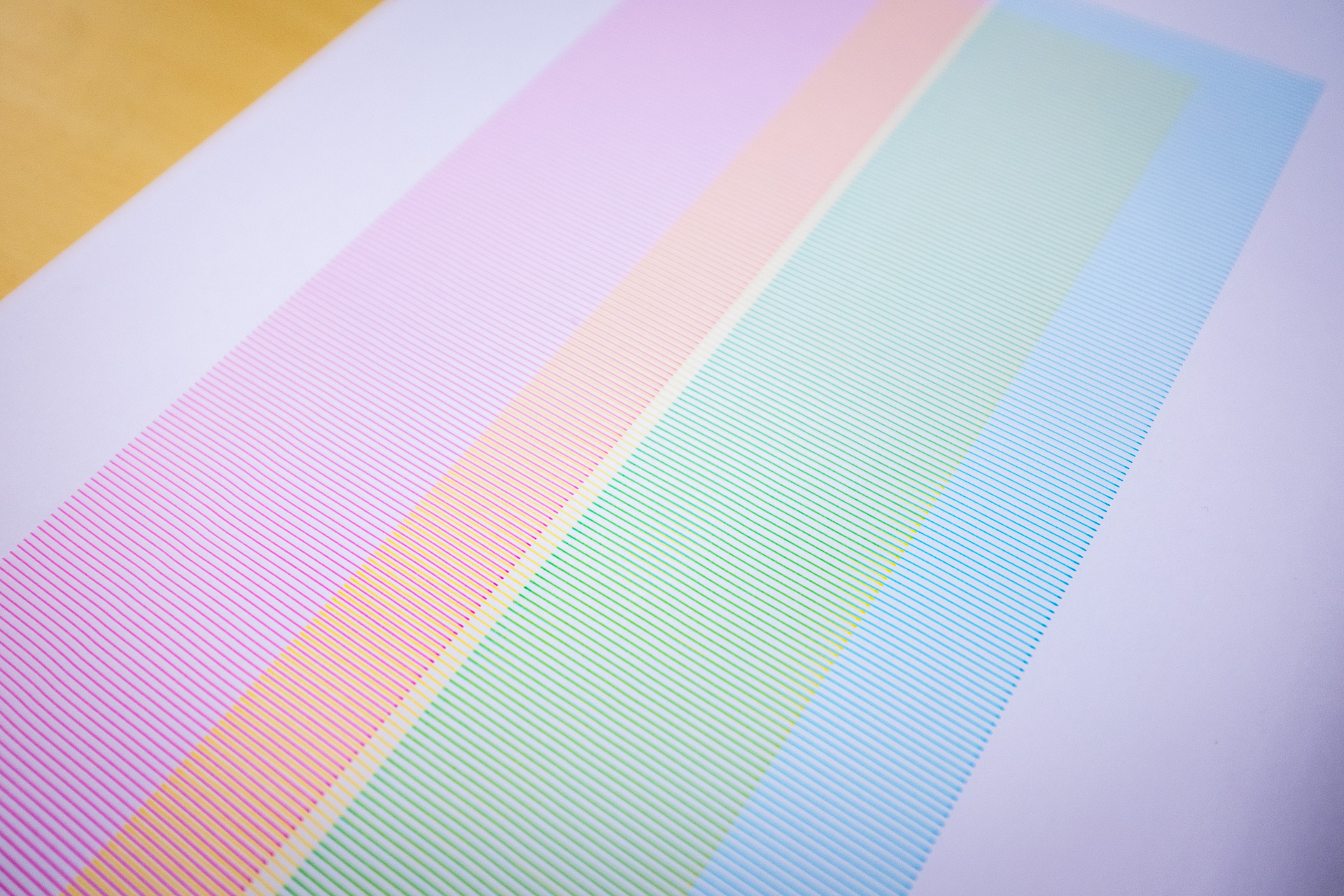 Just like above, but instead, you're rotating as well as shifting. Rotating starts to get you all the cool moiré patterns. 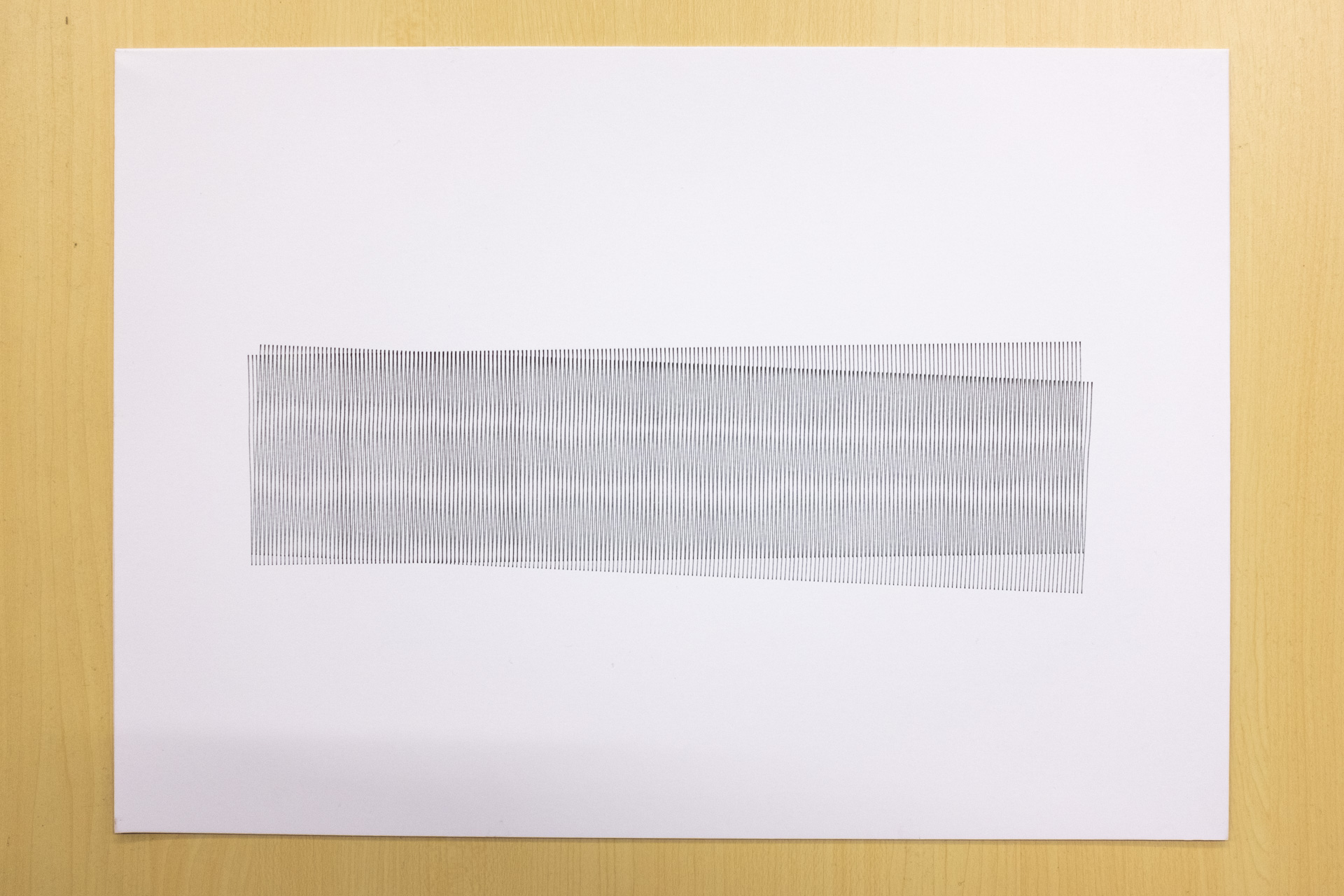 As much as I like to drag these things out, there isn't much more to say. Use the lines to test your plotter, experiment with exploring the design space.