Dancing the flip-flop, going by the new aesthetic playbook and devaluing art. 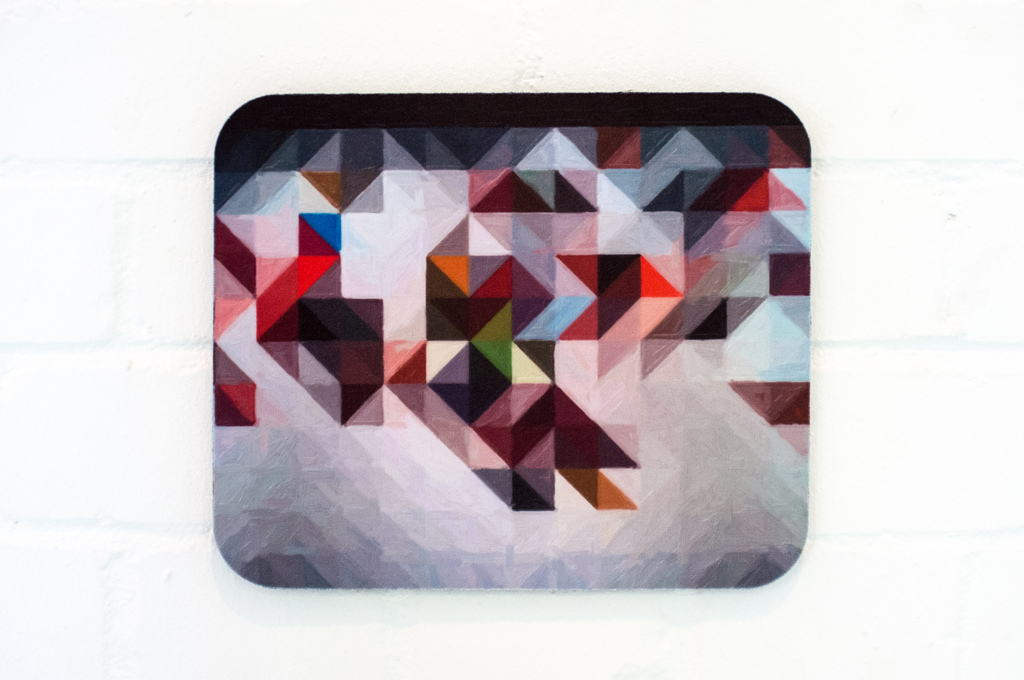 I've been pretty busy recently but in-between the little cracks of time, here and there I've still managed to have a play, this post is about one of those things.

This is not New Aesthetic nor is it Art, but it is playing a little with both. It's certainly a thought process from start to end that I'll run down in a moment. Something I'm not proud of though is that at each step in the process I've chosen to devalue the original art rather than creating something new and original, next time maybe :)

Robin Sloan wrote about the flip-flop, here's the premise...

the flip-flop (n.) the process of pushing a work of art or craft from the physical world to the digital world and back again—maybe more than once

It’s step three above that is most crucial to the flip-flop, because that’s where it becomes clear you aren’t aiming for fidelity in these transitions from physical to digital and back. That’s where your work gets exposed to a whole new set of tools—really, a whole new physics.

...you should go read the whole post and then come back here, or at least look at the pictures.

Often I'll read these posts and go "Oh yeah, that makes sense, that's a good way of doing things" and then not actually do anything about it. But this time I thought I'd give a flip-flop a go, even if it turns out I wasn't responsible for the first step.

Step 2 - Getting the source - Pill Spill 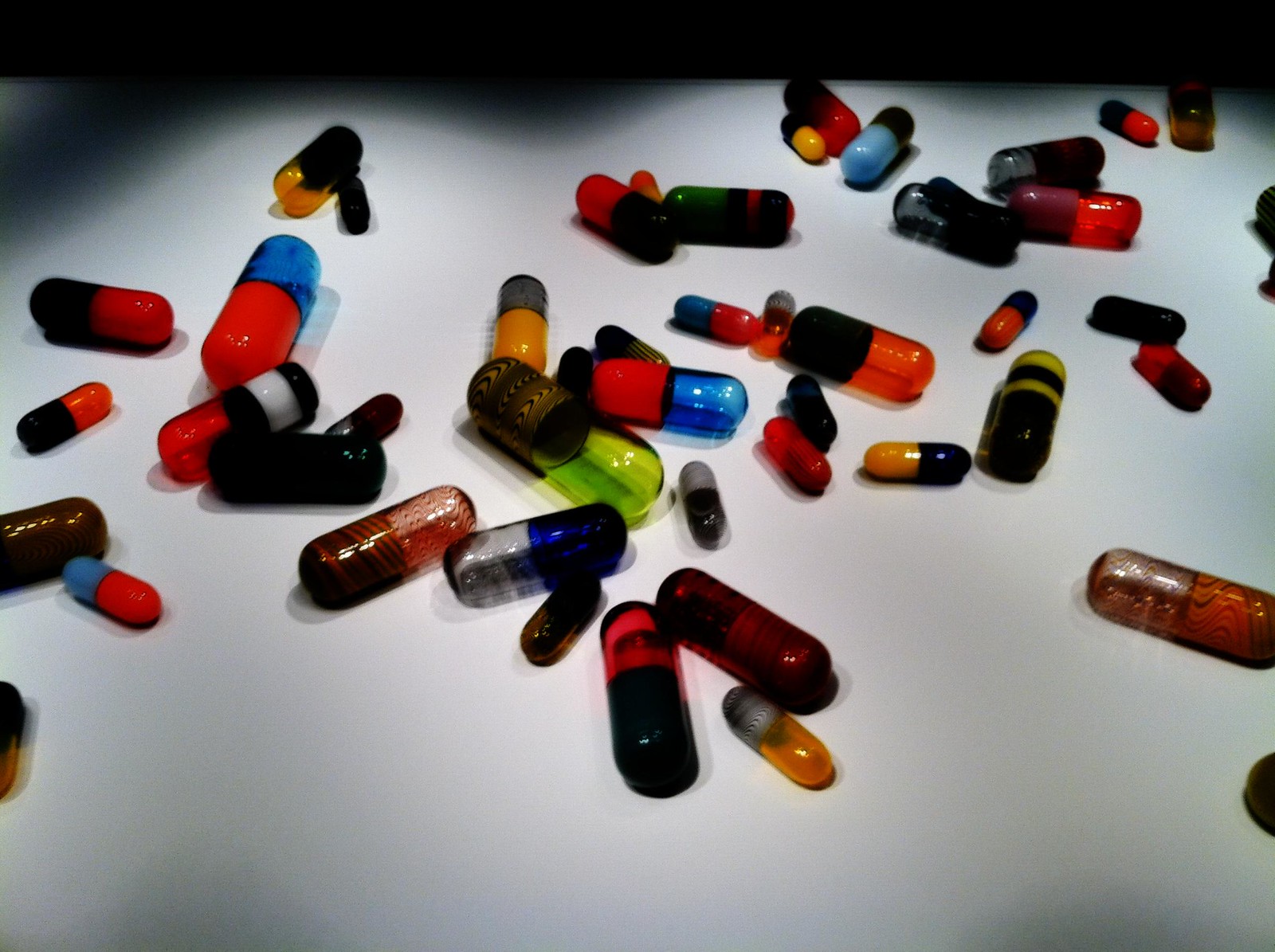 Pill Spill is a work of art by Beverly Fishman, each Pill is made from two crafted halves blown by a master glass blower, each pill is about a foot (9" - 14") long, you can see more photos with this Google Image Search: Beverly Fishman Pill Spill.

From our flip-flop point of view this is already a physical representation of a different physical object. The photo above, pulling it into the digital world, was shot by Aaron at the Detroit Institute of Arts and uploaded to Flickr (via parallel-flickr, with the filtr filter applied).

Giving us the original digital conversion. 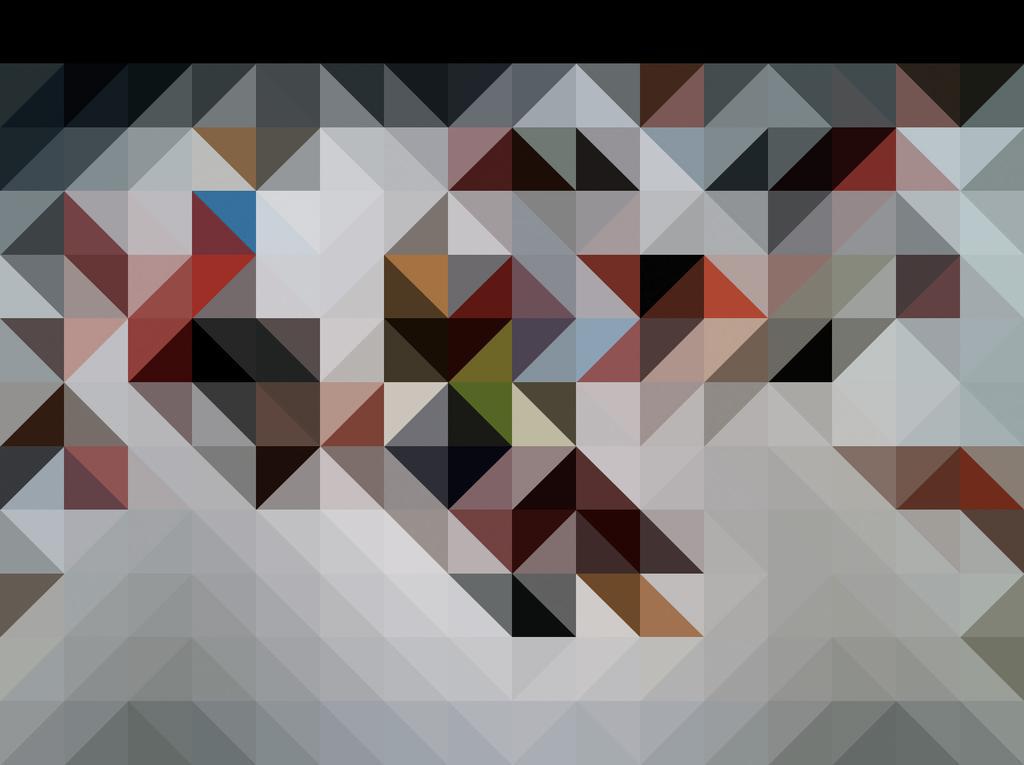 You can see a comparison between the original and the new abstract version over here on GitHub, which allows you to swipe back and forth between the two.

I've written about Flambient before, the original reason behind writing it was that I wanted to work with the Guardian's API to display headlines over a fullscreen image from the matching story (more about that over here). However at the time the Guardian only supplied thumbnails of the images in the API and I needed a way to scale them up that didn't make them look blurred. So Flambient was written to generate a large abstract image from a much smaller source image. I also had in mind many of the visuals that were appearing on the New Aesthetic tumblr at the time.

Anyway, by applying the Flambient algorithm we've made a big jump away from the original Pills and easily into the world of the abstract. 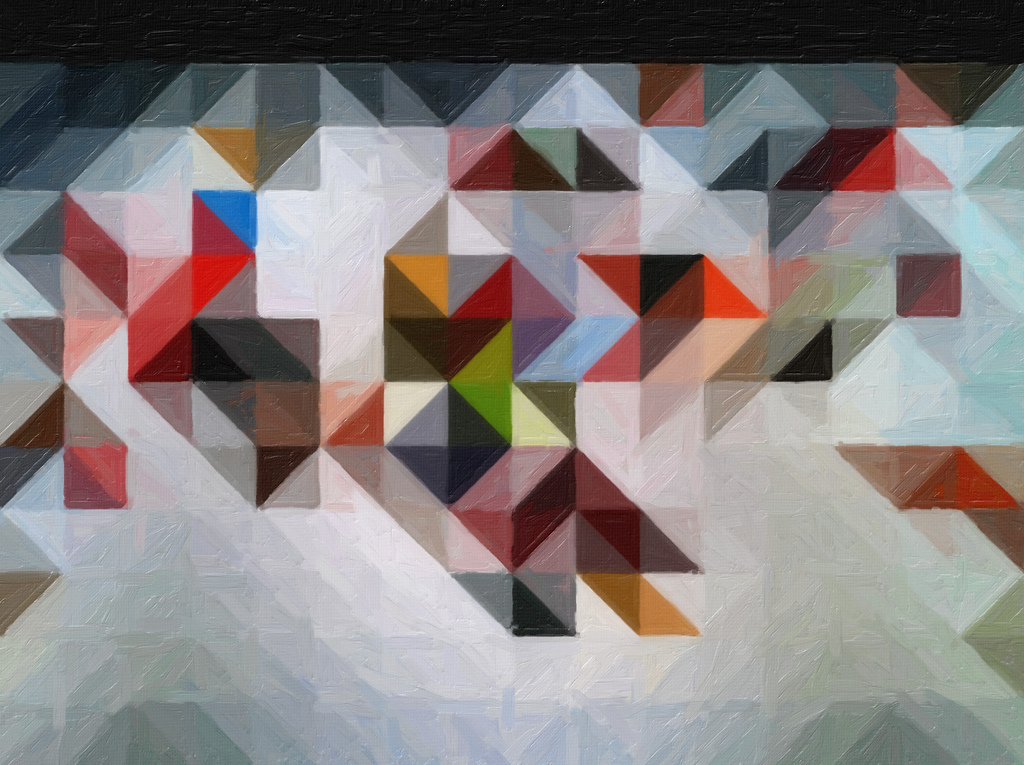 Again you can swipe the difference over on GitHub.

I've always been amused by Alien Skin's Snap Art photoshop plugin. Again it's algorithms all the way down, this time trying to emulate how a person uses a paint brush. There's clearly very clever stuff going on, examining the rate of change in colours to figure out which direction a brush stroke should be going in, when to use long strokes, when to use short curved ones.

However I feel the act of taking things like landscapes, portraits and still life which are often painted anyway and finding a way to pretend paint them somewhat dull. I'm far more entertained by taking something computer generated and then getting the Snap Art algorithm to attempt analyse it and "paint" it how it thinks a human would. Or .

So in flip-flop world we now have one humanising algorithm's attempt at processing an abstraction algorithm of a digital photo of a physical world representation of a different physical world set of objects.

Time to pull it back into the physical world.

Step 5 - The Zazzle wasteland and the Dead Media Project 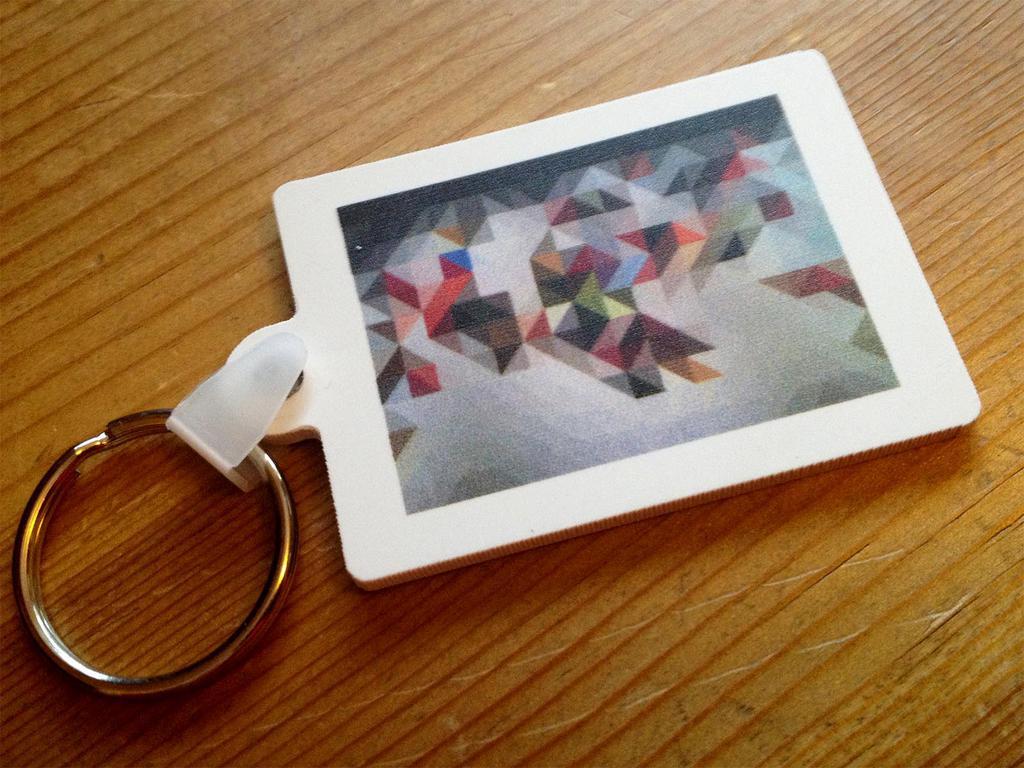 It's a this point that things definitely took a turn for the worse, I was all ready to send the painted effect abstract image off to somewhere to be printed onto stretched canvas. I've done this before end the end result is very pleasing. I figured I'd do that, hang it, take a photo and I'd have performed a successful and quite rewarding flip-flop.

But no! Why end up with something that could pass for artwork when you can carry on throwing the new aesthetic playbook at it and end with amusing tragedy instead.

The new aesthetic tumblr had pointed me at this great article by DISmagazine: Spam-erican Apparel, well worth a read. Zazzle is a service that allows you to upload an image, stick it onto something like a t-shirt or a mug, then buy yourself one and get it shipped to you. In my experience what normally happens is someone wants a one-off item for themselves and Zazzle does a good job of that.

However Zazzle carries on selling the image you uploaded all over everything else, badges, mouse mats, mugs. Anything ever uploaded lives on in eternity. Even more entertainingly there are bots and algorithms churning out new designs, much like spam emails, generate enough and you may get one "hit" per 10,000 attempts. The bots creating t-shirts don't need to make good ones, they just need to make 1 in every few thousand that someone may buy.

Imagine if you can, an infinite strip mall created in Second Life, with virtual avatars wearing automated clothes trying to sell you the worlds ugliest keyrings, forever, and that is the hell that is Zazzle.

So obviously instead of a nice canvas print I knew I had to Zazzle something.

What else could the new aesthetic playbook serve up for me? Why of course something Bruce Sterling, but something older, it reminded me of the Dead Media Project. Sterling's proposal (he's had a few) that a collection should be made of now dead media, Interactive CD-ROMs, VR glasses from the past, Megalethoscopes, off brand viewmasters and so on.

While not exactly that, it did make me think of mouse mats, Zazzle sold those.

Not dead media but certainly a dead artefact from the past. There was a time, when mice got fluffy balls, that mouse mats were good advertising real-estate. Once a year around christmas time, several mouse mats from various companies would turn up, each adorned with a year calendar and phone numbers. Plumbers would have mouse mats, printer repair companies, pie manufactures, all vying for that valuable space on your desk. Soft mats, plastic mats, rough mats, smooth mats, mats with gel in, mats with water in, glitter mats, nonslip grip mats, mouse mats were nearly as prevalent as AOL CDs.

Now we have laptops and trackpads and optical mice and gestures and so on we don't really need mouse mats anymore. They served a certain purpose but their time has past, we just don't need them now.

Which of course doesn't stop Zazzle from letting you (or a bot) slap an image on one and sell it.

The choice was obvious, one dead media mouse mat coming up! The flip-flop back into the physical world was complete. I was now in the possession of a physical manifestation of a digital manipulation of a originally physical piece of art.

There was just one thing left. To blutack it to a white brick wall and take a photo.