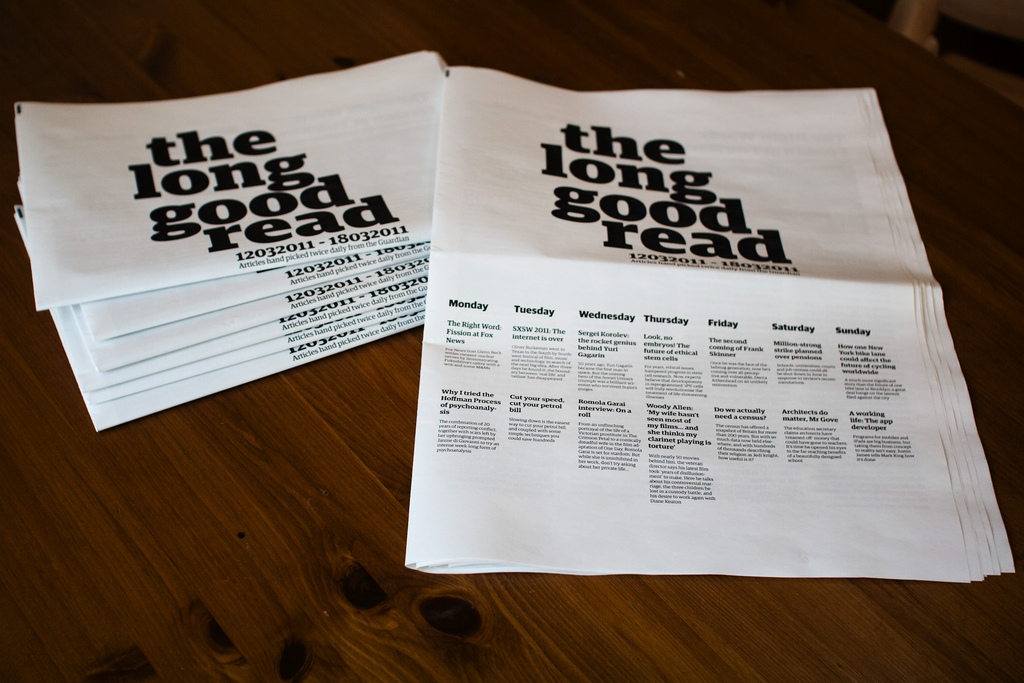 There continues to be much discussion around Long-Form Journalism, latest; Long-Form Journalism Finds a Home and The Atavist along with good old longreads.com. An interesting quote from that New York Times piece (just incase it's too long to read or you've hit your 20 article limit)...

"In the digital realm, there is infinite space, but somehow this hasn’t resulted in a flowering of long-form content,"

The flip-side, which doesn't get discussed much or at the very least gets bundled (or confused) into the former, is Long-Form Reading. There's a reason stuff tends to stay short on the web, reading from the screen is fucking awful. I'll take your tweets by the hundred, I'll muddle through a blog-post if needed. But if it gets any longer into Instapaper it goes, where I can safely forget about it until such a time that I'm so bored (or stuck on a train) that I'd willing burn my eyes out to pass the time, then, then I'll read it.

That doesn't mean I'm against reading longer articles, indeed I set up specifically to hunt out such things. The Guardian publishes hundreds of articles a day, some short, some are galleries, some a paragraph or two long directly reposted from the AP Wire and some are good long proper features or stories.

Using various bits of loosely joined code two articles a day get posted to the Long Good Read blog, 14 in a week. The blog itself isn't meant to be read, because of the aforementioned reading off the screen problem, instead it's a hub feeding into and throwing out a full fat RSS feed. Allowing people to point their own tools at it (RSS to Kindle for example) to consume the content how they like.

Here's an interesting question though. If you took 14 long articles from the Guardian paper and website published throughout the week, and turned them into a newspaper, what would it look like?

The good folks over at handily print newspapers, for you.

A bit of hacking on the backend of The Long Good Read and I had a webpage that dumped out last weeks worth of posts, a quick Copy/Paste into InDesign and suddenly I was a Newspaper Editor, go me! Actually by "Newspaper Editor" I mean, someone who was trying to make all the headlines and column line-up and look nice(ish). 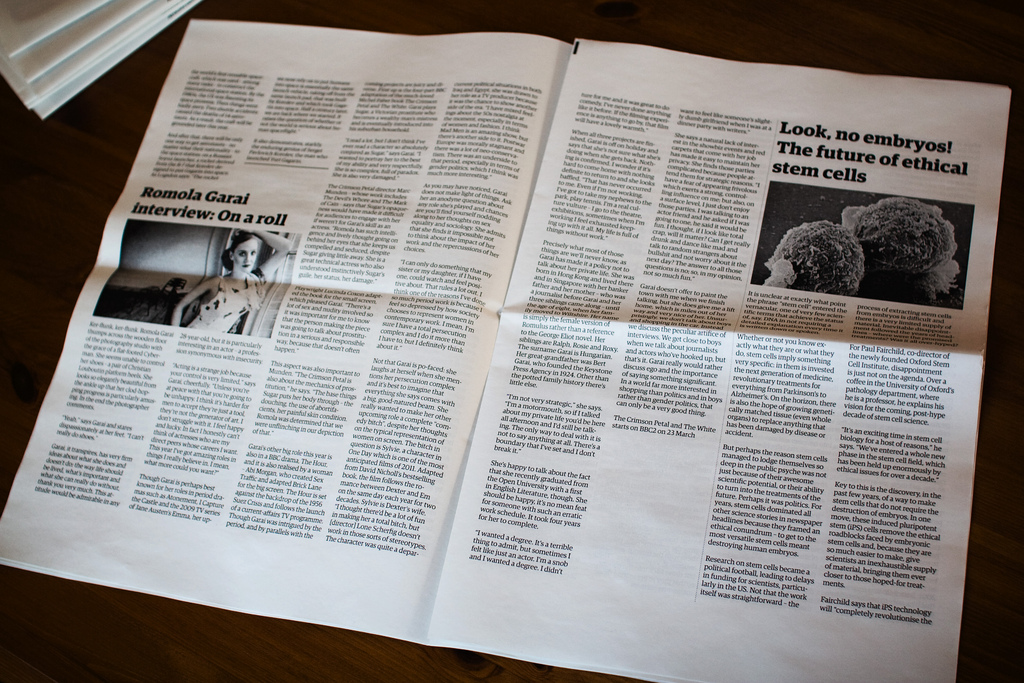 Well, first, you can read it! This issue with 14 stories weighs in at 24 pages. It feels like a real thing, you can hold it, fold it, take out wasps and flies in one arcing sweep with it, it's a thing of wonder.

It's also different from reading a newspaper, your eyes aren't skipping round the page as much, scanning articles figuring out which ones to read. Sure, in this case not every article is going to appeal and you can quickly move onto the next one (and the one after etc) until you find something you want to read. But when you do it's always something decent to get your teeth into.

It feels like something I'd want to subscribe to, a longer title could be "Things Probably Worth Reading as Filtered by Everyone Else, Weekly". I can see myself reading it on the train (indeed I did) and doodling in the footers, or settling down with my slippers and liquorice pipe in front of the fire with it.

Not as a replacement for a newspaper (or the news), there's still something good about the serendipity of reading a newspaper and keeping up with the latest news is surely a worthy pass-time, but as a weekend treat. You can also recycle it or burn it for warmth.

I'm being glib. Because this was just an experiment there's a bunch of stuff missing. Bylines, original publication date, credits under the photos, URL back to the article on the web and so on.

I also, being the amateur that I am used 14pt text, what an idiot!! I really should have known better. While the paper is a good 24 pages, the font size is more suited to a young child's book, not that of a serious newspaper. Serious newspapers probably use 10pt or 11pt, they make you work hard to read them because you're a grown up adult.

Actually I'm not sure the larger font is such a bad thing but next time I'm going with a smaller font.

I think it was Russell who said something along the lines of, "probably the thing you least want to print at Newspaper Club is a paper" (I paraphrase, probably badly). Meaning that to mimic an actual newspaper is to miss an opportunity, newspapers have developed in certain ways due to the technology of the printing press.

Newspaper Club allows runs of just 5 paper, full of whatever you want. My talk above about settling down in front of the fire with pipe, slippers and Paper was used to convey the feeling of comfort and familiarity with reading for pleasure.

Because these are longer articles, they tend to have taken longer to write and more time to research and hence less urgent news-y, it doesn't matter that they are a few days old by the time they hit the Blog, and a few more days before they get sent off to the Newspaper Club press. That time, the delay between having been published once and then published a second time, is an advantage. Conversations in comments and via twitter will probably have taken place. There's no reason not to pull in that wider context, links to other articles, more background information, counter viewpoints and so on.

Anyway, I'll probably knock out another edition, with smaller fonts, captions, links and so on. Just to see how it will again look in it's simplest form, but with all the extra attribution stuff that it aught to have thrown in.

Then think about how it could work in a more complex, contextual fashion. Maybe even some graphs, because everyone likes graphs. 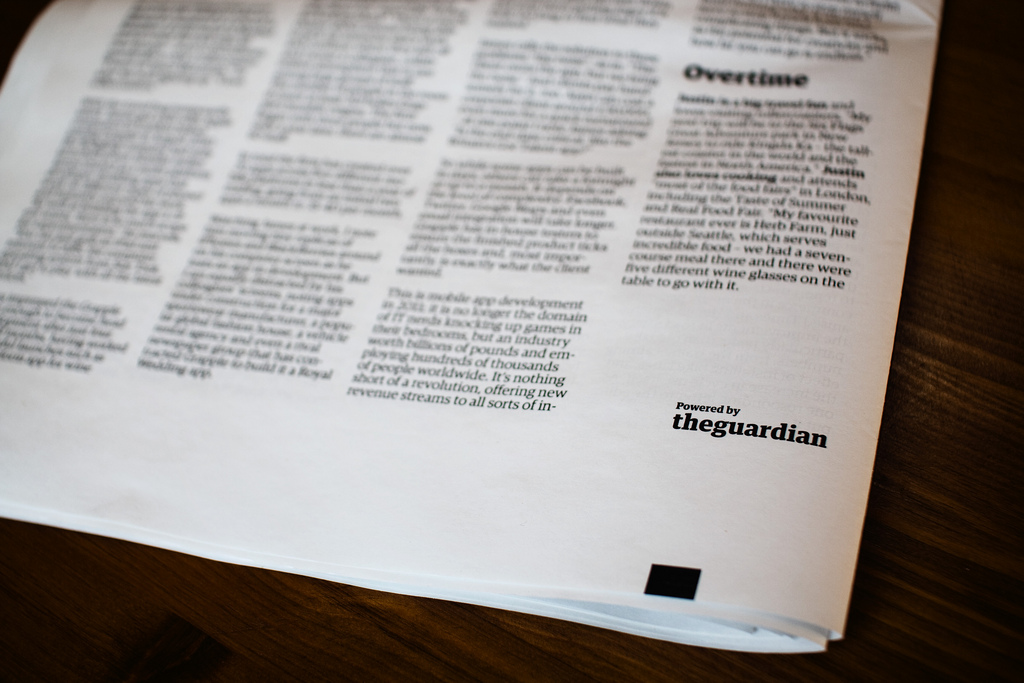 "Powered by the Guardian"

Of course there's one more thing to consider before getting carried away.

All this is possible, or rather, made much easier because the Guardian has an API. It's how the Long Good Read can monitor the news stories, it's also how I can grab the content to paste into InDesign.

In short, it's a great way to get content to play with.

However, this particular experiment is just that, an experiment. As fun as re-printing the Guardian's content and framing it differently, the API's Terms and Conditions specifically prohibits re-using content for print. For very good lawyer backed reasons too (I expect), I have no argument what that.

It's just a shame that in a digital world where we can happily have mash-ups and remixing with digital content, we can't (in this instance) do the same, with the same content in print. With (printed) newspaper in decline, this is where the fun stuff is. If you're an actual newspaper, this is your last chance to play with this stuff on a large scale before it's too late.